“It was also my philosophy from day one to spend money when I had to, not when I wanted to.”

Debbie Godowsky started Cookies Direct LLC with $375 and her home kitchen. She provided fresh baked cookies to college students around the country. The business quickly grew and Cookies Direct began getting orders for every occasion.

They have now been in business for 20 years and continue to innovate. In 2005 they created the “Club 9” program. This is a donor program to support the US troops and their families. In a nutshell, supporters can donate $9 to Club 9, which buys an extra dozen cookies in a care package headed off to a deployed serviceman or woman. 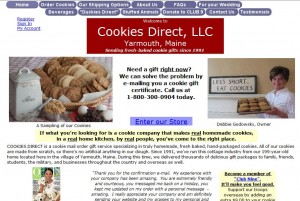 MO: I am impressed by the small investment it took you to get started! Will you tell us about the very beginning phases of Cookies Direct and how you were able to make it work on a small budget?

Debbie: Twenty years ago, there was no internet, not even email yet, so I didn’t have to contend with marketing expenses related to the internet (web site, on line credit card processing, advertising, etc), which is pretty much a given in today’s world. That $375 start up cost was for the printing a few hundred brochures. Initially I thought it was my cookie package that was my product. In actuality, it was that little brochure containing the order form with “amount due” that became my product. That’s what I had to sell!

Each summer, I distributed my brochures to colleges and boarding schools throughout the country. Then I would wait for school to start, and sure enough, I would begin to get orders from parents with their payments (didn’t take credit cards yet!). Since I operated as a Cookie of the Month Club, payment for the entire subscription was made up front. This provided an excellent cash flow. In 20 years, I never have had to borrow a penny.

I worked alone. And I worked from home. When I did have to enlist help with cookie production, I paid them as independent contractors. And no one had set hours. They came in, got the job done and left. (still the same today) Again, if we had ten orders to ship, they were paid for two hours. If I had 20 orders to ship, they were paid for four hours.

So this is how I was able to make it work on a small budget.

MO: Did you do any marketing early on to begin getting orders for occasions other than college care packages?

Debbie: Not really. I had this vision that if I limited my product to a simple Cookie of the month subscription, I could really control how many days each month I would need to bake and ship cookies. (I still wanted to consider myself an at-home mom at that point!)

What I didn’t factor in was that parents would be ordering their subscriptions at all different times, so pretty much from the beginning, we baked and shipped every Monday. As I grew, we had to add Tuesdays and Wednesdays as well.

However, within a year or so, parents who sent cookies to their kids at school began calling me with other cookie needs. And this pointed me in a new direction. Our Cookie of the Month program is still strong, but sales for birthdays, anniversaries, get wells, congrats, thinking of you, thank you gifts are stronger.

Debbie: Being featured in Oprah Magazine was a wonderful opportunity. But it was not like my cookies were listed on Oprah’s top ten list! The story was not about my cookies. The story was about me starting a cookie company. They didn’t even list my contact information in the story because they were not promoting my business. So the only way someone could track me down was to google Cookies Direct. Make no mistake – I still got a slew of orders, even without the contact information. But for every person who called to order cookies, someone called to see if I wouldn’t mind telling them how they could go about starting a business like mine!

The best part about being in Oprah was the photo shoot. They sent two photographers to my home from Boston, as well as a hair & make up stylist and a fashion coordinator from New York City. They spent an afternoon here taking a couple hundred shots. All for what would ultimately be one photo in her magazine.

MO: Can you tell us more about the Club 9 program? How did you come up with the idea and why is it important to you?

Debbie: The initial idea was not mine. It was a customer’s idea.

Back in 2005, a customer called me from Springfield, Massachusetts and placed an order for a deployed soldier. We were (and still are) one of the few companies out there that will ship to a military address. He also asked me to add $9 to his order. He said that when I received my next order for a soldier, he would like me to add an extra dozen to his package, anonymously. ($9 was the cost of a dozen cookies.)

When I got an order a couple of days later from a woman whose husband was deployed, I told her that her husband would be getting a free dozen. She was so touched by this random act of kindness by a total stranger, that she asked if she, too, could pay $9 for a soldier to get some cookies from her.

And when I happened to mention this to a couple of my friends, their reply was, “What a nice idea. Put me down for nine dollars, too.”

So it didn’t take a rocket scientist to figure out that I had stumbled upon a wonderful opportunity. With each email promotion I sent to my customers through the Campaigner email marketing service, I mentioned this chance to join “Club 9”. The response was fantastic. Why? 1. It was only nine dollars. 2. It was easy. “Just add it to my order”. 3. Most importantly: They knew that they were providing something tangible : 12 extra cookies in a soldier’s package.

So here we are, six years later. The program is stronger than ever. And I am happy to say that every one of the 4,897 packages that have gone to men and women serving around the world has contained an extra dozen cookies from a total stranger.

Why is this program important to me? Because box #5000 is just around the corner and we will make it happen!

MO: What has been the biggest challenge you have faced since starting Cookies Direct?

Debbie: There have been so many challenges. But the greatest one comes every December 1, when we start shipping our holiday packages. Our December shipments represent about 30% of our annual production. I call in all the helpers I can find, and we bake and ship six days a week. My bakers arrive by 6 AM and they are often here 12 hours later. They go home, catch some sleep, and get up to do it all over again the next day. Because we are maxed out with a full slate of shipments every day, there is no wiggle room to make up for power outages, snow days, burnt cookies, or a host of other unexpected situations. We just keep baking and baking until the job is done, which is three days before Christmas. But I am blessed with a dream team of cookie elves in my kitchen!

MO: We have to know, what is your favorite cookie that you sell?

Debbie: Oh that would definitely be oatmeal raisin. Or maybe it’s ginger krinkles. On the other hand, I am thinking more like peanut butter chocolate chip cookies. You know, I love them all, or I wouldn’t sell them. (Don’t ask us to make hermits…)