“We have found that the most important characteristic that women who succeed in BeadforLife share is the belief that they can change their lives.”

BeadforLife began with a chance encounter between a Ugandan woman, Millie, who was rolling beads near her mud home, and the founders, Torkin Wakefield, Ginny Jordan, and Devin Hibbard. Stopping to admire the beads, the women learned that there was no market for her jewelry, and that Millie worked for a dollar a day in a rock quarry crushing stones in the hot sun. They admired her paper beads and bought a few, never realizing that their lives, and the lives of so many impoverished Ugandans, were about to change.

BeadforLife creates sustainable opportunities for impoverished women to lift themselves out of poverty by creating a circle of connection between women in Uganda and women around the world. Women in Uganda work hard to roll beautiful bead jewelry out of recycled paper and harvest shea nuts to make shea butter. Women worldwide sell these items and educate themselves and others about extreme poverty. The profits return to Uganda and fund health care, housing and business training initiatives. 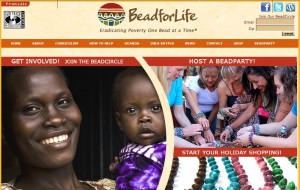 MO: What brought you on that fateful trip to Uganda?

Devin: After we first met almost 20 years ago, my husband and I spent a year living in India. That was such a transformative experience that we decided we wanted to try to live one out of every five years abroad because it gives you such a different perspective on life and what is truly important. We missed the first five-year window, but in 2004 I was finished with my master’s degree and we were ready for a change and thinking of Africa where I had spent some time several years earlier. We had thought we might go to Kenya, but my step-dad had received an opportunity to train doctors in AIDS care in Uganda. We went to visit he and my mom with the idea of checking out the country as well, and that is when we met the first member of what would later become BeadforLife.

MO: What was the process like from that moment of initial inspiration to creating a network of sustainable opportunities for women?

Devin: It has been a long journey and we are truly still in the process of changing, evaluating what we do, and changing again so we can create the most effective program possible. We didn’t start with a master plan or strategy because we thought we would just help a dozen women sell some beads. So developing our model in which women really use BeadforLife as an opportunity to start their own business and create a sustainable income stream has evolved over time.

MO: What type of job did you leave behind to start BeadforLife and was it a hard decision to make?

Devin: I was actually at a great point in my life to make a leap. I had been working as an independent consultant working with US based International Development groups. We ran a big campaign in 2003 to make people in Iowa aware of foreign assistance as part of the 2004 elections. When that came to an end, I was doing smaller projects and was also selected as a Marshall Fellow to spend four weeks in Europe looking at trans-Atlantic issues, so this came at a great time.

MO: What does it feel like to be providing such amazing opportunities for empowerment and growth on multiple levels?

Devin: It is, by far, the most gratifying work I have ever done. I have the honor and privilege to see these amazing women change their lives in front of my very eyes. You can literally see them start to gain weight from week to week. They tell me how their children are now in school, how they now afford life-saving medicines, how they put a new roof on their homes. To see a woman who first joins BeadforLife with her eyes trained on the ground, and then to see her months later with her head held high and pride in her eyes is such a thrill.

MO: How did you start the huge task of teaching the women how to form and run a small business? How challenging was the process to teach impoverished women to suddenly take control of their fate and be entrepreneurs?

Devin: We began just buying beads from woman each week. We soon realized that if we disappeared and no longer provided the market for beads, the women would still be impoverished. So the idea that this had to be sustainable evolved very quickly. We also knew that we didn’t want to go with the traditional fair trade model of helping only a set group of artisans forever. So we came up with the idea that we would help the women gain business skills and start businesses and that they would graduate out of the program. We have tried a lot of renditions of this over time – the first group was in the program for over three years whereas current members are enrolled for 18 months. Our business training has also evolved and improved dramatically since we began.

It is still challenging to teach women business skills. We have found that the most important characteristic that women who succeed in BeadforLife share is the belief that they can change their lives. Some women come in already defeated and it is almost impossible to change their minds regardless of how good our curriculum is. But for women who believe they can control their destiny, what we really give is an opportunity and the capitol they need, as well as some clear business skills. I think the most important thing is the belief inside your heart that you can make a change.

MO: Do you have any plans to expand this model into any other developing countries?

Devin: At some point we would love to expand to another country, but for now there are so many more things we want to do in Uganda that we will stay focused there.