“…then magic happened, like a catharsis happened with them as soon as they knew that story, what they’d been through, was going to help somebody else.”

Diana Keough is a Pulitzer Prize nominated medical journalist with over 18 years of experience working for The (Cleveland) Plain dealer, National Public Radio, and the Emmy-nominated PBS Newsnight Akron. ShareWIK Media is a health and wellness media platform that produces content to educate and engage users. Things move fast in the world of small business and entrepreneurs. Since our interview, ShareWIK won this year’s FastPitch Competition that took place in Savannah last week. Not only did ShareWIK win the Entrepreneur category but it won overall winner, as well. Congratulations to Diana and her team at ShareWIK!

MO:
What was your background prior to founding ShareWIK?

Diana:
I have been a journalist for over 20 years in print, radio, and television. I also did a lot of online writing for Beliefnet and other online organizations, like FaithfulReader.com, book reviews, BookReporter.com. So I have kind of run the gamut. At the time, when I was doing it all, I actually didn’t know everything that I was doing was going to lead to being so well equipped to do what I’m doing now. But it sure has worked out that way.

MO:
Can you describe what ShareWIK is?

Diana:
ShareWIK is an online media network that provides health and wellness content that combines the magic of personal storytelling with expert opinion and then distributes that material, that media content, throughout an exclusive, unique distribution model.

MO:
What differentiates ShareWIK from other medical advice sites?

Diana:
Two things. One is that we rely . . . a lot of the other websites that are health-related always go from expert down, and they will have the patient as part of the package. We start with the personal story. We do that primarily because of the importance . . . again, my background and really what I loved about my job at The Plain Dealer as a health reporter was the fact that I loved telling people stories. It was a real privilege.

When I was actually looking for what my next venture was going to do, I wanted to start with the personal storytelling. If you’ve ever had a loved one or yourself have cancer, or you lost a patient, or watched a parent die of Alzheimer’s disease, or any other health crisis, the first thing that you do when you leave the doctor’s office is pick up the phone and you’re looking for somebody else to talk to who’s been through it.

The whole concept of ShareWIK . . . ShareWIK literally means “share what I know.” The differentiation is that we start from the personal story and then have experts speak to it, to that personal story.

MO:
What made you choose to leave your career and start a business?

Diana:
I moved to Atlanta from the Cleveland area. At the time when I left The Plain Dealer, nobody was walking away from journalism jobs at that time. But I had three kids still at home here in Atlanta, and I was commuting between here and Atlanta for over a year. What do you do next when you’re already doing what you’ve always wanted to do? I mean, it was a great paper, it was a great job, and I only left because it wasn’t working for my family to be away so much.

So it really came down to . . . I have a husband who’s a business consultant. He was a former McKinsey guy, and I couldn’t talk about leaving my job for about four months without crying because I loved my job. He drilled it down to one particular question. It was, “What was it that you loved so much about your job?” It kind of piggy-backs on the last answer that I gave, but it really comes down to the fact that I love telling people stories.

If you take a vacation, if you’ve ever been to Europe . . . most people, when you come back from Europe, you’ve seen these incredible sites, you’ve seen things that you’ve only seen in museums before up close. You got to touch David. Those types of questions that you’re asked, “How is Europe?” And you say, “Great,” and nobody asks you any more questions but it changes you.

What I noticed in sitting and listening to people’s stories, when they knew that I was listening from start to finish, something happened. Then magic happened, like a catharsis happened with them as soon as they knew that that story, what they’d been through, was going to help somebody else.

That’s how I made the jump into doing online things. How do you tell people’s stories? That’s why we start with a story, because no one else is doing that, and it’s really important, because there’s such a value in people’s stories and what they’ve gone through.

Then we started marketing, basically set up the site to be for the medical gatekeeper, which is women. Most women don’t get their hair cut or even get their teeth cleaned unless two of their friends are going there. That’s how we started this whole social network. It’s basically an always smart and sometimes sassy health and wellness medical networking site. That’s how the whole thing began.

MO:
What steps did you take to prepare to launch ShareWIK?

Diana:
We did a lot of researching what else was out there. I had to learn a lot about web development. Basically, I had one job when I was a print reporter and that was basically reporting the story. I’m not minimizing that at all, because that was a really big job. But I not only now have to basically report the story, but cover all the financials and basically do all the business development until recently. We just a brought a business development guy on.

The preparation that we did was researching first of all what was out there. How they were telling stories, how they were basically marketing themselves, and really what set everybody apart. We originally started with an idea of having a podcast, like just doing podcasts. I felt very strongly that we couldn’t start unless we actually had the potential and actually launched with video because of the Google, the bots and how it all sets up. So we kind of figured out how we do that as well. We brought on a partner that had a video production, television production background. That was pretty much what we launched. 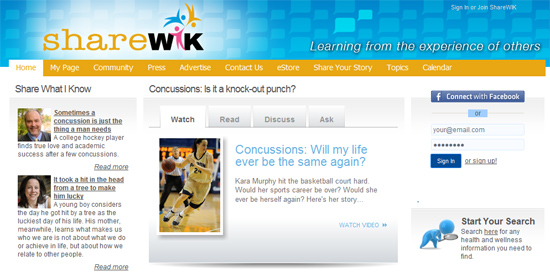 MO:
What has been the most exciting moment as an entrepreneur?

Diana:
Probably closing that first contract. You’re hoping that you’re doing something that other people are going to like. The other thing was actually seeing every month that the amount of people coming to the site is going up exponentially every month. The other part of it was using all the years that I spent as a journalist working with a lot of the hospital systems in Northeast Ohio. The fact that they were willing, on this new venture, to take a chance and support me, that was really very affirming that I was actually doing the right thing.

MO:
What’s next for ShareWIK?

Diana:
We’re actually gearing up to start fundraising. Again, as a journalist, I often say to . . . some nights I sit down at the dinner table and I’m like, “Being just a journalist was so easy.” I had to basically learn how to approach investors, put investor packs together. ShareWIK has actually been asked to be a presenter at the Fast Pitch Competition that happens in Savannah this week, Thursday.

We’re basically on the radar. We’re growing. We’ve established this distribution network, which again, it’s all basically media contacts and based on the network that we’ve put together. That’s what you can expect. We are gearing up for fundraising and exponential revenue and growth. We’ve already kind of hit all of our marks for revenues this year already.