“They solve cost, durability and contamination transfer problems along with a “WOW” factor that gives their manufacturers a competitive edge over traditional tactile human-machine interfaces.”

Everyone has seen holographic technology in sci-fi movies, but now because of a company created by Douglas McPheters, it’s actually here. HoloTouch, Inc. licenses its widely patented touchless, intuitive actuation and control technology for use in specific devices – they allow people to operate electronics by merely passing a finger through holographic images of what would otherwise be the device’s keys or buttons, floating freely in the air.

The company also offers its licensees whatever design or engineering services are needed to create prototypes of customized devices using its technology. 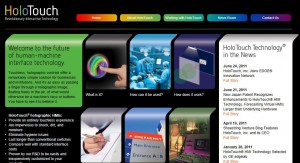 MO: Can you explain in laymans terms how touchless intuitive actuation and control technology actually works?

Douglas: Almost infinitely flexible, essential components of any device using HoloTouch technology® are a hologram, a light source to reproduce its image and a wave source sensor to detect when a finger or other object enters that image.  In just one of many applications, a surface relief transmission hologram (such as found on a driver’s license) of what would otherwise be the keys or buttons of a device is affixed to the side of an acrylic plate away from the viewer.  A light source such as an LED or laser diode shines on the same side of the acrylic so that the hologram’s image appears to float in the air on the viewer’s side of the acrylic.  A wave source sensor, often infrared, with a “sweet” spot coincident with the reproduced image is positioned on the side of the acrylic away from the viewer.  Attached electronics supply power and transmit commands to the device’s circuits, all in a completely sealed unit with no moving parts.

MO: What types of companies are licensing this  technology, and for what uses?

MO: How long of a process was it from the inception of this idea to actualization of the company?

Douglas: Once our first U.S. patent issued in 2002, HoloTouch, Inc. was organized and commercialization of our technology began to accelerate.

MO: Can you tell us about some of the benefits of adopting HoloTouch technology?

Douglas: In brief, use of HoloTouch technology fuels devices (a) with no moving parts (nothing to fail under use or abuse) or (b) sparking contacts and which are (c) touchless (no cross contamination or repetitive stress problems but intuitive), (d) easily sealed against surrounding environments and (e) more “green” because they replace devices with much shorter useful lives (less junk for landfills).

MO: Tell us about your personal background and how it led you to creating this technology?

Douglas: I’m a graduate of Yale College, which I attended on a merit-based NROTC scholarship, and later earned a Juris Doctor degree at the University of Pennsylvania Law School; between the two, I served as a line officer in the Atlantic Submarine Force, in my last seagoing billet as Chief Engineer of the USS Tigrone.  For twenty-five years, I practiced law in Manhattan, specializing in banking, mergers and securities, in many cases for foreign companies and individuals.  While writing a thriller (as yet unpublished), I conceived of HoloTouch technology, initiated patent application processes and geared up commercialization.

MO: What would you see as success for HoloTouch Inc. in the next five years?

Douglas: Broader adoption as more OEMs understand that HoloTouch technology is the only truly intuitive, touchless HMI technology which doesn’t require special gestures, machine training or guessing where to put your fingers and is more efficient than many tactile HMIs, both initially and over time.