“I left my teaching position, and I went into it with all the heart and passion that I had…”

OpenInvo’s founders are creative thinkers who have realized in their many and varied travels that they are not alone as people who are overflowing with ideas. OpenInvo’s goal is to provide companies with access to untapped creative resources for innovation, and to offer the necessary support services for both buyers and sellers of intellectual property.

MO:
What is the path that led to the founding of OpenInvo?

Emily:
Before I started OpenInvo, I was an artist. I actually had never thought that I would go into business. I had an art career. I showed my work internationally doing sculpture and video and performance, and also I taught. I have a Ph.D. in Media and Communications, and was teaching here in New York at the Musical Media Studies Program and also I taught in Israel at the Interdisciplinary Studies Program at Beit Berl College in Kfar Sava. My main focus was about the intersection of culture and technology and visual culture. But I was one of these creative people that came up with too many ideas for products and services, and everyone around me said, “Why don’t you do this business or that one?” And I said, “I don’t want to go into that business. I have an art career. I have my students. What would I want to do that for?” Until my now co-founder, he says to me, “Why don’t we have a business out of selling ideas?” So, it was the first business I ever wanted to be the owner of.

Since starting OpenInvo, I stopped doing everything else. I put my art career on hold. I left my teaching position, and I went into it with all the heart and passion that I had with my artwork.

MO:
What is OpenInvo and who is the service designed for?

Emily:
It’s a marketplace for ideas. Anybody with an idea for a product or a service can upload it to the site. They’re called idea providers. On the other side, idea seekers, who are mainly R&D departments of corporations that are looking for innovation, for innovative concepts, they come to us to search for ideas. So that’s the core of the business.

In the coming months, what we’ll do is implement some advanced functionality to the web side of it, including collaboration tools where people can work on ideas together and also online brainstorming for companies that are looking for ideas. So it’s a platform to support the innovation process, to get ideas from outside sources, from outside of organizations.

So that’s the online component of it. We just launched the very beginning stages of a hands-on or offline component to the business, which we call the OpenInvo Studio which is a series of workshops to be held in corporations by artists and creative professionals for skill building and design thinking and visual communications. Through the OpenInvo Studio, we’re starting to do some ideation or brainstorming sessions as well.

MO:
Walk through an end to end example as to how this concept works.

Emily:
Say I have a concept for a new shoe. I’m already in business, besides the art career and the other things that I’ve done before, so I don’t want to become a shoe designer. That’s one thing. The other part of it might be I don’t have any contacts in the shoe manufacturing industry; I don’t want to take this idea to market. So I might go to the OpenInvo platform, create a log in, and upload this concept for my shoe and be led through a bunch of questions about it. What’s the idea? What’s the need for it? What’s the market? What’s the problem that the concept solves? And then there’s a place to upload drawings and video and any other support materials for the idea.

For example, Nine West or Kenneth Cole might be one of our clients, and they see this new shoe concept when they’re searching the platform. They don’t see my name or anything like that, but they see all the materials, all the support materials for it. And then they decide, “Hey, that would be great. We’d like to explore it further and maybe even produce it.” So they would approach OpenInvo to find out about buying or licensing the intellectual property from the idea provider.

MO:
How is intellectual property protected?

Emily:
So basically, the system works through a series of NDAs, a little bit more built out. So, when an idea provider joins us, there’s a contract in place between OpenInvo and the idea provider. It’s not a normal Terms of Service like on other websites. It basically says that whoever puts the idea up, that it’s their original work, that OpenInvo is not responsible if they’re not posting their original work, and that we won’t show it to anyone that we don’t have an explicit contract with.

On the idea seeker side, they agree that they have the right to search the database, but they have no use rights for anything, and we track everyone who looks at every idea and keep a report of it. And everyone who is an idea seeker knows that we’re doing that. So there’s a little bit of, technology has helped with the intellectual property side of things. Also, anyone that has a patent for something, they can upload their idea into the system. Anyone with a copyright or a trademark, we’ll accept those as well. In the future, we’ll have partnerships with companies that will help people get provisional patents concepts. 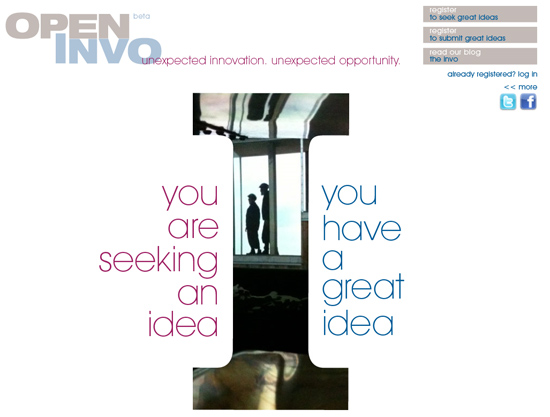 MO:
Have you made any connections between idea seekers and idea creators?

Emily:
Right now, we haven’t done any deals specifically on the platform, because at the moment we’re trying to get the word out about it. Our idea seekers are really beta testing and finding out how we need to build out their dashboard for them. But what we’ve done here at OpenInvo is actually put some people together off the platform that are working together in interesting ways.

One of them is a manufacturer of backpacks, for college kids’ backpacks. They happen to be made from recycled plastic bottles. The market that he was going for wanted a $20 to $30 backpack. It didn’t need to be fashionable at all. So someone else that came into our circle was a fashion designer selling very high-end accessories, mostly bags, all out of reused material, recycled material. Her bags were in the upwards of $600 range. So we put together this designer and the bag manufacturer in the same room. It took them about a half an hour to be able to speak the same language. Somebody who makes beautiful one-offs, very high-end stuff and someone who is going for a mass market. But both of them had green values to their business, and they saw that there was something that the other one was doing that could benefit both of them. Now, they’re actually working together to create a mid-range line that’s manufactured, that aren’t single unique pieces, that are all from recycled materials and go for a little bit of a different market, kind of a department store market.

MO:
What is one thing that you have learned as a business owner?

Emily:
Marketing is hard. PR is actually really difficult. Getting the word out about the platform has been really a challenge. No matter how many Facebook friends or Twitter followers you have, people need to hear the name OpenInvo or whatever your business is over and over again and actually go there. We’re not just an easy “like” on Facebook. Somebody can like us, but we have a little bit more of a commitment. If 10,000 people know about the platform, we might have 1,000 that sign up for the service and maybe half of them might upload an idea or two, and maybe two of those ideas could be viable.