Ken Canion is a former contestant on NBC’s The Biggest Loser and author of several motivational books.  Ken is the host of his own syndicated radio show called Reality Radio.  As a motivational speaker, he has earned the name “America’s Most Passionate Speaker.”  Ken’s style is energetic and humorous as he helps develop managers and leaders.  He also uses his branding expertise to help entrepreneurs create powerful brands and teaches them how to market their brand.  He is the founder of three successful grassroots companies that have been featured in Black Enterprise, Source, and Essence magazines. He has also been highlighted on CNN, QVC, and the Home Shopping Channel.

Ken just announced his latest entrepreneurial venture: the launch of a national campaign to inspire and motivate 1,000,000 of the nation’s families through a new clothing line aptly named Affirmation Apparel.  The concept behind the clothing line is to “empower, inspire and motivate” families through a series of inspirational messages printed on the clothing.

MO:
Affirmation Apparel sounds like a great line of clothing.  The designs are up to par with the latest and popular graphic tees.  You take this one step further by adding an inspirational message.  Tell me about the origins of this concept? 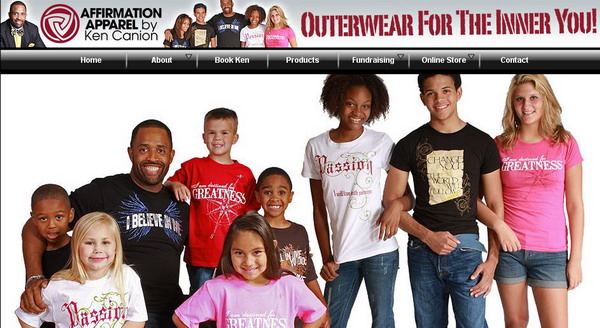 Ken:
There are so many clothing lines that sell the same items as Affirmation Apparel, with one exception: They’re not empowering. That’s where we’re different.

I actually like a lot of the t-shirts on the market, but after seeing so many of the skulls and cross bones, the blood and gore, I thought, “Why not have a high-quality product that sends a message to build up? Why not uplift people? Why not motivate people? I thought it would make a great combination.

MO:
What type of response have you received from consumers on this new inspirational clothing line?

Ken:
It’s been phenomenal! We’re been overwhelmed by people with whom our products truly resonate…because they are uplifting…because they’re positive.

You look around you and everything is negative. The problem with negative thinking is that you actually believe it after awhile. In fact, you can make yourself believe anything if you say it long enough. And unfortunately we live in a negative environment: the economy is down, wars abroad – so much negativity. And then there are the wars here at home: homelessness, unemployment, drug addictions – there’s so much negativity all around you. Too many of our youth – and in many cases entire families – are falling prey to that line of thinking. Now’s the time change that thought process.

MO:
Are you expecting it to be more popular among a certain demographic such as teenagers?

Ken:
Initially we thought that teenagers would be our ideal demographic, but surprisingly a lot of 25-45-year-olds are purchasing them for their younger siblings, their children, their grandchildren. They’re telling them, “You know, you ARE destined for greatness!” They’re reaching their young ones while they’re still at that impressionable stage; they’re making a positive impact on their lives.

MO:
I realize the clothing line just launched this month, but are there plans to expand into other items such as shirts, hats, jackets, etc.?

Ken:
Absolutely! In fact we’re doing all those things and more. We’re in the planning stages right now to expand. We don’t have a firm date set as of yet but it’s soon coming.

MO:
Your website at AffirmationApparel.net suggests using Affirmation Apparel for fund raising purposes.  That’s an opportunity to motivate and inspire while helping a worthy cause.  Talk a little bit about how the fundraising process works with Affirmation Apparel.

Ken:
Just as folks raise money for candy, cookies and other items, we’ve expanded that same opportunity to schools, organizations and churches.

The second option is truly unique: We provide the organization with its own Affirmation Apparel Web site. They draw the traffic to that site and receive a percentage of what’s of their Web site. We then ship the product(s) directly to the consumer.  The affiliates never deal with any products, paperwork, etc. It’s practically effortless.

The fundraising options allow us to sell our products without the competitiveness that’s often met in retail. Realistically, we know what we’re up against: they are all types of clothing lines available and we needed a specific niche so as not to run up against those. Basically, we carved our own brand that protects us from (1) the retail market; and (2) other fundraisers. It’s proven to be quite successful: our affiliates are extremely happy with the options we offer – and they receive a check once a month.

MO:
You’re living proof of personal transformation, motivation and success.  You’ve launched your own ventures, written books, you’re a popular speaker… what is it that motivates some to act and others to sit idle on their ideas and dreams? 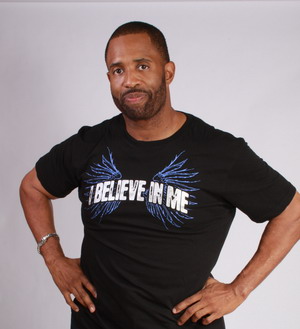 Ken:
Great question! I think it’s mostly fear, and for two reasons: First, our society contributes a lot to that mentality. Think about it: from the time our children are in school, the “cool” kids are hip, fun, trendy. The “nerds” are the bookworms, teachers’ pets – all the things that are seen as negative to our kids’ peers. And kids would rather be cool than un-cool…and nerds aren’t cool.

The other thing is this: For some, fear is easy. You don’t have to think. You don’t have to strive for anything. You just have to be complacent or lazy and sometimes both, which is counter intuitive because you actually spend as much effort becoming fearful as you would if you pursued your dream.

The difference is the mentality. And that mentality goes back to “garbage in/garbage out.” If you say negative things often enough, they become a part of your psyche – and that’s what drives you. So if you say something like, “I’ll never get a college degree,” you’re probably right. There’s only one factor in the man who receives a degree and the one who doesn’t: that factor is the mentality.

And that mentality is often based on fear.

MO:
Among the many hats that you wear such as radio personality, author, speaker, entrepreneur, and others, which do you find most rewarding and why?

Ken:
All of them are equally important because they’re all geared toward empowering and helping others to make a positive transformation. I could no more choose one over the other as a mother can decide which child she loves more. They’re all my babies…they all serve a purpose. And that purpose is why I do what I do.