Larry Wilson was born an entrepreneur.  He started at age 14 by selling comic books out of his parent’s basement.  He continued down this path until he was running a retail chain of stores, named Cartoon Corner that had a presence in shopping malls across the country.  Larry’s next venture was a complete shift from his original passion of comic characters, he recently started OppositesConnect.com which join the ranks of many successful and profitable online dating forums.

Opposites Connect operates on one fundamental difference from traditional dating sites: that people don’t necessarily want someone just like themselves.  Virtually every other dating site on the internet uses some type of matching algorithm to find how compatible you and your partner are by measuring how similar your interests/feelings/beliefs are.  Opposites Connect says, maybe we’re not all looking for that, maybe some of us want to date someone different from ourselves in order to make each other more fulfilled.

MO:
Tell me about your worst date and why Opposites Connect would have made it better?

While OC wouldn’t have made that one any better, it was the general malaise and stale tenor of the dates many of my friends were experiencing that in part, contributed to the origins of OC.

So many people were experiencing dates where the conversations were just boring reflections of what the two people had in common as detailed in their online profiles.

Conversations were quite literally, “So… you like sunsets? Me too.” And to me the more times you say, “me too,” the less likely the odds you’ll have a stimulating conversation that sparks enough interest for a second date.

That’s why Opposites Connect users experience more successful dates early on. After finding someone interesting on our site, you’ll find your differences with that person help to create conversation starters that fuel the curiosity needed to make for an interesting date.  Curiosity fosters, interest, engagement, and most importantly… passion.

Larry Wilson:
I tend to live by the principle “Differentiate…Innovate…Populate.” As discussed earlier, the online dating arena is full. But it’s full of the same thing!

Other dating sites match people up with their mirror image, which just seems boring to me. When I first researched other online dating sites, I was aghast to find there were no “opposites attract” dating sites! It’s probably the oldest credo in dating. It just seemed like common sense to me to create one. So OppositesConnect.com easily differentiates itself from all others.

We also have to find ways to “innovate” the site to enhance the differences. For us that means the creation of fun and interactive ways to connect people in ways other sites do not. These include our “OppoVote,” where members participate in weekly polls on today’s current events, and the “Rivals Rooms,” where members declare their passions for their interests and engage in spirited debate over them.

I’d also like to think that one of our greatest innovations is the stunning look of the site. Just like I found other dating sites all the same with regards to their M.O. (please excuse the pun!), I found their look all pretty much “vanilla” as well. We take great pride in OC’s clear, bright and simple user experience.

Once you’ve got “differentiation” and “innovation”, it stands to reason that people will come… hence, the “population” element of the equation.

This triangle marketing and development approach of course can be applied to any broader industry.

MO:
Most dating websites these days claim to have some type of scientific method based on doctors, psychologists or analyzing the actual data.  What is your system based on?  How did you come up with this system? 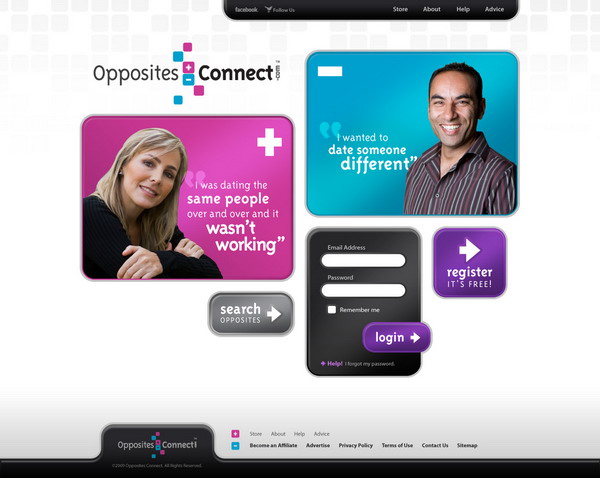 Larry Wilson:
Our system is based on a proprietary match-making software system and the practical experience of our staff of relationship experts. As I alluded to earlier, when I first researched online dating sites it just seemed nuts that there was no “opposite” dating site out there. We all know couple who are so different, but they’ve been together forever.

So when I had the idea for the site, I presented it to a group of acclaimed relationship experts. Two of these experts are therapists who currently sit among our board of advisers and write advice columns for the site. They believe the biggest mistake people make in their failed relationships is choosing the same types of people over and over again. OppositesConnect.com gives singles the instrument to find someone different…someone out of their box to break the unsuccessful pattern of failed dates.

These highly experienced experts helped me devise the quiz that you’ll find on our site that helps members find a deeper connection with each other. Our relationship experts are not found in a laboratory, classroom, or clinical setting, they are meeting with clients…real people every day. It’s their practical experience that went into devising our matching technique. We are very proud of the sound methodology used in devising our proprietary matching software system, and we won’t be the site that touts “science” in our design..

Larry Wilson:
I learned about doing business by doing business! I was so young and only had basic text book business ideologies, but I found those fundamental ideas really worked. The laws of supply and demand, marketing and expansions served me well. Much like the “triangle” philosophy I spoke of earlier, I was able to identify a need in the marketplace and devise a way to exploit it to deliver a product more efficiently than anyone else. And anytime your product makes people happy, you’re doing something special. That’s the nice thing about Opposites Connect as well, not only will we be making people happy, but we have the chance to change their lives in a positive way.

As for the remainder of your question… it was plain and simple hard work that got us out of the basement. Friends and family helped, and that’s an important factor to consider for entrepreneurs everywhere. There’s no shame in seeking help from the people around you. If you’ve got a good idea with a sound plan, you owe it to yourself AND the people around you to present it to them. One way or another all businesses large and small start this way. Whether its friends and family, angel investors, or venture capitalists…it all starts with your belief and passion for your idea and your ability to convey it to others.

That having been said, the greatest lesson I’ve learned through all my experience is the power of listening. ALWAYS listen more than you talk. Listen to your closest confidants to be sure, but mostly listen to the marketplace. It might be the oldest doctrine in business, but it’s still the best… listen to the customer, they’re never wrong.

MO:
Comic books and dating would generally seem pretty opposite to one another in popular culture.  What types of skills have you learned from running a business in the comic book world that translates into the dating world?  Do you think this gives you any advantages coming from such a different background?

Larry Wilson:
Frankly business is business and an opportunity is an opportunity. Whether it’s entertainment, social media, manufacturing, or comic books… there’s always the business side to the equation.

Working in the retail industry connected me with millions of people from all walks of life.  That experience is priceless.  I understand how consumers think, how to sell to them, what their expectations are and how to provide great service.  Those are the tenants we deployed at OppositesConnect.com.

Being from such opposing worlds definitely doesn’t hinder us, my background in comics is still providing great connections in the business world that are tied directly to OC’s success.

MO:
My final question, tell us about some of the most interesting stories that have come through from Opposites Connect users or yourself?

Larry Wilson:
Well we’re still very new so I don’t have many specific stories from users yet. I do have many favorable comments from members and people all across the country of how the concept really resonates with people. It’s so gratifying to see how it connects with folks. So many people have the same reaction that I did… that meeting your opposite, being attracted to them, and being able to develop a long lasting relationship with them is just basic stuff! Now there’s a dating site to reflect that viewpoint.