NerdWallet is shaking up the credit card information world

Tim Chen is the Founder and CEO of NerdWallet.  Tim went to Stanford and studied Economics and Computer Science.  He was previously a hedge fund analyst before starting NerdWallet.

MO:
What is the most important thing most people don’t know about credit cards?

Tim Chen:
Credit card companies are not your enemies, but they’re not your friends either.  They provide a very important service – extending credit and other banking services to the American public – but at the end of the day, they are in the business of making money. Once you get past the idea that they are “evil” and focus on the way they play the game, it becomes a lot easier to use them to your advantage, which is exactly what we try to help consumers do.  With our site you can find the card that is going to pay you the most rewards or save you the most money on interest, and with our blog you can learn which “landmines” to be aware of, so you can go on the field prepared. 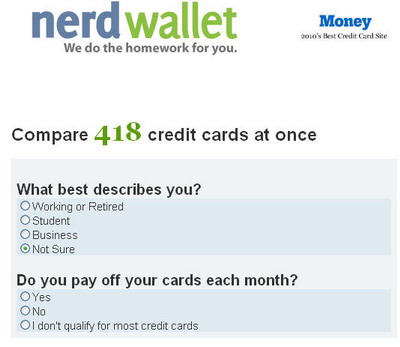 MO:
Is Nerd Wallet your first startup?  Has it gone the way you planned or what were some major realizations you’ve had during the process?

Tim Chen:
Yes, it’s my first.  There was certainly a steep learning curve for the first few months.  Since I bootstrapped the company, I had to learn how to do pretty much everything myself, from setting up a web server, to building a database-backed website, to marketing and PR.  But now things are going to plan.  We’ve hit our stride and I’ve been able to bring on a few more key partners to help me push the business to the next level.  You’ll continue to see innovation out of us in the credit card search world, as well as further insight into the business of credit cards from our blog and our contributions to the Forbes Moneybuilder blog.

MO:
How do debit cards fit into the picture versus credit cards?  What types of situations would you recommend debit over credit and vice versa?

Tim Chen:
Though they look the same, debit and credit cards are entirely different products from an end user perspective, since one is tied to your checking account and the other is a line of credit you can pay off later.  I personally prefer to use credit cards because of the additional protections they offer.  If someone uses my debit card number to make fraudulent purchases, that’s money out of my pocket until the bank decides to refund it to me.  If I have bills to pay in the meantime, that’s a real problem.  But with my credit card, I’m not responsible for those charges at all.  From NerdWallet’s perspective, we don’t deal with debit cards because most consumers just take whatever goes with their checking accounts.  There are far fewer choices, interest rates don’t matter, and the reward programs are usually pretty lacking, so we stick to credit cards.

MO:
What sorts of changes do you expect to occur from the changing regulation regarding banks in the US? 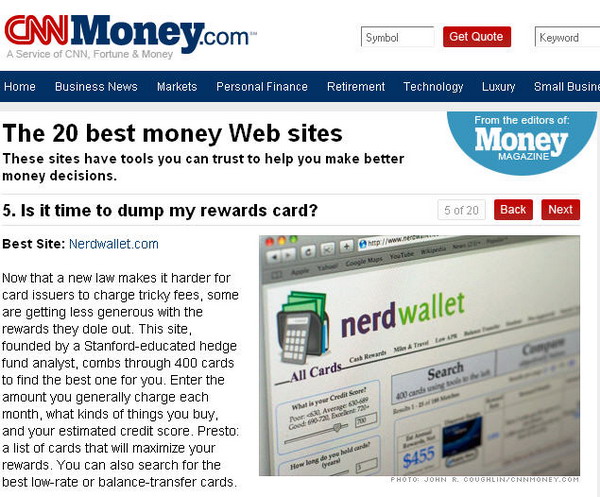 Tim Chen: Jamie Dimon, CEO of Chase, put it best: “You know, if you’re a restaurant and you can’t charge for the soda, you’re going to charge more for the burger.”

We’re already starting to see higher annual fees and higher interest rates on credit cards across the board, and I wouldn’t be at all surprised if this spills over into more and more banking products (see our Forbes article on how free checking could die out soon ).  The regulation was intended to hurt banks that got us into this mess, but since this is a free market and they are capitalist institutions, they are just going to pass the costs of regulation off onto their customers.  While the fees they charged before may have been egregious, they were predominantly meant to penalize those who abused their banking privileges by missing payments and overdrawing their accounts.  Now that they can’t do that, they will be forced to impose higher banking costs on the rest of their customers, including those of us who pay our bills on time and don’t overextend our credit lines.  To make it worse, the burden of the regulations is going to fall even more heavily on the smaller community banks, most of whom had absolutely nothing to do with the financial crisis (here’s a letter we received from one such bank).

MO:
I’ve read some of your articles where you talk about how other sites list biggest cards like BoA and Citi because they pay the best commissions.  You also said they are not very good deals.  Companies that play the transparent rating game have often run into moral hazard problems (Yelp for instance).  How do you manage these issues in the long run at Nerd Wallet?

Tim Chen: For one, in our search results we explicitly state which cards are “Sponsored” and which cards are not.  And you can easily see how many unsponsored cards we list.  Plus we rank everything by numbers – rewards or interest rates – and we’re as transparent as is humanly possible about how we calculate these numbers, so users can see exactly why we’re recommending certain cards for them.

As for our blog, we are not shy about pointing out which credit card deals we view as being unbeneficial to consumers.  In the past, we’ve written about how “5% cash back” deals are misleading and one of our most popular blog posts is “5 Reasons to Avoid the Amex Blue Cash” .  These are all cards that pay us commissions.  But at the end of the day, they all have positives and negatives, and which credit card you choose is a personal decision.  So even if we don’t like these cards, someone else will, and they’ll sign up for it.  All we can do is put all the information on the table and hope the consumer makes the right choice for their own situation.

MO:
There are so few credit card companies (Visa, MasterCard, American Express, Discover).  Do you think this oligopoly is good for consumers?  How might a startup disrupt it and what sorts of hurdles are involved?

Tim Chen: In reality, consumers have plenty of choices; the problem is that they might not know it.  After all, we have more than 600 cards in our database and we’re nowhere near finished. So our job as disruptors is to expose as much information as possible, and make sure that the banking public is aware of all these choices, so that they can make financially sound decisions.

To give you a better idea what I mean, the choice of Visa vs Discover doesn’t really matter that much anymore (Discover is now accepted at 90% of the places that accept Visa), but what does matter is Chase vs. Citibank vs. your local community bank or credit union. Since Chase and Citibank have the bigger marketing budgets, consumers face an asymmetry of information.  Credit unions and community banks are generally praised for having superior customer service, and they often have better deals on credit cards and loans, but too few people even realize that’s an option.  Our goal is to change that.