Isaac Garcia is the co-founder and CEO of Central Desktop – a Software-as-a-Service (SaaS) social technology platform that allows business teams to communicate and collaborate more efficiently. He oversees business strategy and sales for the company.

Prior to launching Central Desktop in 2005, Garcia started his technology career in 1996 as the first sales representative at Quote Desk Software – a company later acquired by CNET Networks, Inc. in 2000. In addition, he co-founded Upgradebase in 1997 and Vendorbase in 1999, a B2B marketplace for computer resellers. Both companies were also acquired by CNET. Garcia spent three years at CNET, serving as Director of North America Enterprise Sales for CNET Channel.

Garcia received a Bachelor of Arts in English from Ambassador University, and attended the University of Northern Colorado Graduate School where he studied English Literature for a Master of Arts. He is married with two children, and currently lives in Altadena, CA. 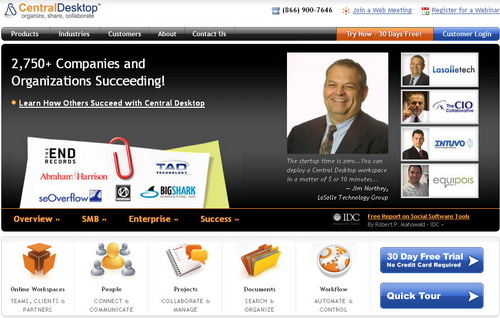 It’s always interesting to read somebody’s back story – such as majoring in English and English Lit – and then seeing him or her excel in an industry that had absolutely nothing to do with his or her college education. What series of events caused you to move out of academia and into technology?

Having graduated in English Literature without any “marketing business skills” (except that I could type really fast) I took a job as a word processor at a small property management company in Denver. Since it was a small company I ended up being “the computer guy” – just because I liked to tinker with software and computers. I ended up taking on some projects that required me to learn how to code customer databases and billing systems. I essentially taught myself through help manuals, books and friends. With this knowledge, I took a software sales job in California – again, without having any sales experience. Overtime, I felt like I had enough technology and sales experience to venture out on my own when I started my first software consulting company.

A quick review of your history reveals you’ve not been alone in your success, as you’ve partnered with Arnulf Hsu on several projects. How did the two of you hook up, and how has your relationship with Hsu contributed to your overall success?

While working at Quote Desk, my first sales job, I was also the main speaker when we would go to trade shows and events. I was presenting at Comdex Las Vegas (the largest technology trade show at the time) when Arnulf Hsu was in the audience. He was impressed by the product, my speaking and sales abilities and we talked after my presentation. After Comdex, we stayed in contact and ended up co-founding our first company together later that year. Arnulf is the technologist in our partnership and I’m the sales & marketing guy, although we both dabble in each other’s domains. Our strengths and personalities are very complementary to each other and are a perfect blend for building and growing a business.

I’ll admit, it’s been educational researching Central Desktop’s niche – team collaboration. Last time I supervised company projects, we had paper charts with colored bars. And we walked on wooden sidewalks, or so it seemed. Now, it’s a highly competitive market with major players having their own platforms.

How has Central Desktop carved out a market share up against the Googles and Microsofts of the world?

No matter how you slice up the market, Microsoft is the dominant player in virtually every segment of the business market. They are the largest software company in the world and are heavily embedded in large enterprise companies. Alternatively, Google is the largest internet company in the world, but has a very consumer-centric approach to the market. What we’ve found is that there is large under-served market that sits in the middle between these giants. We like to refer to this segment of the market as “the ‘M’ in SMB.” The medium-sized businesses in the world, they might be a department within a large company, or they might be a “mid-sized company” that wants to be treated like an enterprise company. But the reality is that they tend to act and buy products like they are a small business. We provide products and services that appeal to this segment of the market that are affordable, quick to deploy, easy to use and don’t really involve the IT department. We tell prospects that if they want simple, consumer-like products, that they should go to Google (they are free, after all), but we don’t think that you can successfully run your business on Google’s platform. Alternatively, if they want to deploy a Microsoft solution, the IT department will be involved along with all of the costs, training and hassles that come with it. 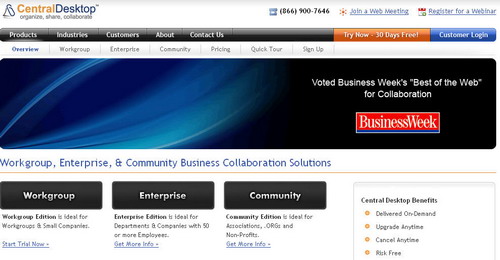 Staying on team collaboration, Central Desktop recently released version 2.0 … including such features as web conferencing and micro-blogging. Where do you see growth (both short- and long-term) in team collaboration platforms in the future? Do you think we’ll eventually reach a point where the bricks-and-mortar office environment no longer exists?

We primarily sell our larger deployments of Central Desktop to established mid-sized companies and departments. Sure, many of them are using Central Desktop to collaborate with remote or virtual workers, but most of the usage is within a traditional brick-and-mortar office. Our small business customers, though, use Central Desktop to connect remote works, telecommuters, virtual workers, mobile workers, etc. Startups need the flexibility to work from anywhere and we do a great job of making important files, documents and projects accessible from anywhere they can access the internet.

But to answer your question, I do not believe that brick-and-mortar offices are going to disappear completely – there is just too much collaborative value in people working together, in person. Nothing is better than working face to face with someone.

Anybody who’s gone down the successful entrepreneurial path has had his or her share of ideas that didn’t quite pan out. You’ve been in technology since 1996 – a long time in that field. During that time, did you have any concepts or projects that didn’t turn out? And how did you apply those lessons to your future successes?

I’d say that my consulting practice wasn’t as successful as I’d expected – mainly because the money that I could generate was directly related to the number of hours I could bill. Put another way, a consulting practice is not a very scalable business. It only scales by hiring more consultants who can bill time. With Central Desktop, we deliberately created a business that could scale to many, many users under one platform – all being billed on a cumulative, subscription basis. The lesson of scale is something that I’ve learned more and more about through each new venture.

I read where you were described as a serial entrepreneur, and your history suggests you’re not opposed to taking on new projects. Any concepts on the horizon you’re willing to share?

We’ve still got many years to go with Central Desktop before I can consider other opportunities. That being said, I think I will always be interested in technology, software and the SMB market. There are 5 million SMBs in the USA alone – and they need software and tools to help them scale their businesses. There is a lot of opportunity out there.