Which domain development company has released more than 1 million sites in the last 12 months?

That would be Epik. You may know them by the developed websites like Patents.com, WiFi.com, Questions.com, or Alerts.com. What you may not know is that in the last 12 months, the company has launched more than 1 million websites. To see more, visit Epik.com/brands

Rob, you have been working at warp drive speed to develop a very impressive network at Epik with a strategy you describe as “The User-Centric Semantic Web.” I believe this is the cornerstone concept of your build out efforts. Can you elaborate some on your vision here?

The web of today is highly concentrated with the top sites like Google, Facebook, Youtube, Yahoo and Live dominating traffic. In theory Google is the onramp for a lot of other sites whereas the rest of the top sites are all designed to keep the user captive within a single site.

If you look at the history of print and television media, there is a cycle of consolidation and fragmentation. I believe we are in the middle of a period of creative destruction where a new array of independent publishers will emerge that takes advantage of dramatically lower costs of production and taps into the growing demand for media independence.

At the site level, we are fusing the three C’s of the web: Content, Community and Commerce. We believe that domains can be the organizing nucleus around the themes. You can then direct navigate to a site that has the content you seek, a knowledgeable community and if appropriate products and services that are relevant.

At the network level, Epik is combining the concept of portable identity (Identity.net) with a more intuitive user experience as you navigate from site to site. Content and sites that are related to each other will be cross-linked, regardless of who owns the underlying domain. It is all about helping the user. 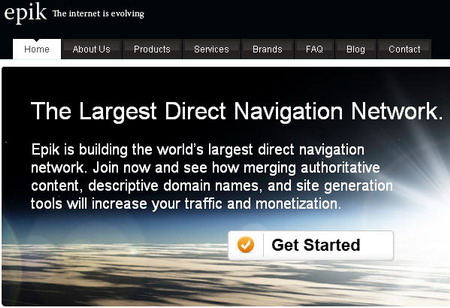 In a relatively short period of time, you have taken the domain name industry by storm. But prior to this venture, you have had some very big business success in other areas. What was your business background before launching Epik and are there any parallels with past business experiences and the opportunities you now see while building your current company?

My first startup is a company called Global Market Insite (GMI). It is a private company developing solutions for online market research, and is backed by some leading private equity groups and hopefully on a track to go public sometime in the future.

GMI was my first Internet startup. I learned a ton about how to build a global company in a capital efficient way. By the time we began raising significant capital, the company was already very profitable which gave us a very different outcome versus had we raised significant capital early on.

In 2007, I left the day to day of running GMI and formed an angel fund called Monster Venture Partners which both backed existing startups and incubated some of our own. It gave me a chance to sample lots of ideas, and work with different people and learn different technologies. 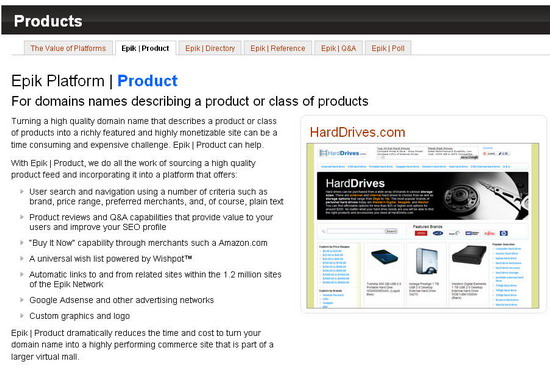 In 2009, I decided it was time to start my next company – Epik. It leveraged much of what I had learned over the years, and also incorporated a number of the insights and technologies from my earlier angel investments, including DevHub.com, Internet Real Estate Group, Healthcare.com, and Patents.com to name a few specifics.

Epik is based in Seattle, one of the top technology hubs in the world. As I sit here in the middle of Missouri building my media empire on MO.com, what advantages am I missing out on by not being physically located where the action is? What benefits do you enjoy as an Internet focused company operating out of Seattle?

I moved to Seattle in 1999. At the time, I was based in Kobe, Japan, working for Procter & Gamble. The logic for Seattle was that it is an established hub for technology ventures. It is also a nice place to raise a family. Last but not least, I was anticipating what people refer to as “The Pacific Century”, i.e. that there would be advantages to being closer to Asia-Pac.

My 4 keys to launching a new business are: capital, cash flow, passion, and persistence. But the challenge many entrepreneurs starting a new business tend to speak of most is gaining access to capital. As someone that was the founder of a highly successful venture backed business (Global Market Insite, Inc.) and a person who now operates an early stage capital fund of your own (Monster Venture Partners), what are some common misconceptions or missteps you see founders making when seeking capital to help launch or grow their business?

I think your list is great. I would add two things: “Integrity” and “Speed”. And I believe they are actually related. I will address “speed” first.

I believe that speed is the entrepreneurs’ single largest advantage over large established companies. The entrepreneur’s goal is not to be perfect. It is to validate a market, often with limited information. Once a market is validated, you can go back and make it perfect, possibly with the help of other people who enjoy doing things perfectly.

I also list integrity. If you are known to have integrity, everything flows more quickly, with less friction and less complexity. Entrepreneurs make mistakes and often have to make tough choices. These are the tests of integrity. Entrepreneurs with integrity are accountable for their mistakes, make amends, and try their best to address ill will. What goes around comes around.

I had the privilege of meeting with you and some of your team at your offices in Seattle a while ago to discuss a possible business deal. We didn’t end up putting that particular deal together, but I came away from the experience with the feeling you genuinely care about and support entrepreneurs and entrepreneurship in general. What’s the driving belief that gets you so passionate about entrepreneurship?

I enjoyed your visit and remember it well.

As for what drives me, I believe we are all put on this earth for a reason. We have a finite number of years with which to find and accomplish our purpose. I believe my purpose has something to do with creating a network of entrepreneurs and technologies that can make the web function better as a platform for collective knowledge.

Right now, the volume of content is doubling every year. And remarkably that rate of doubling is accelerating, and with that, our collective ability to access, process and transmit knowledge is also accelerating. Internet entrepreneurs have a huge role to play in this acceleration because it is technology that is bringing us closer.

I also find that I am drawn to the entrepreneurial personality type. Entrepreneurs are the adaptable types and these are the types who thrive in times of change such as what we are living in today. I greatly enjoy being connected to tech-savvy entrepreneurs.

I just did a quick check for you to see if your last name was available to register as a domain name. Looks like someone else is using the dot com, would you like me to inquire if it’s for sale?

Ha Ha. Because I also built a successful Internet company and have the last name “Monster”, I am routinely asked if I was the Founder of Monster.com. Unfortunately not, but I did have the opportunity to work together with Jeff Taylor, the actual founder of Monster.com, as we are fellow advisors to Internet Real Estate Group. It was a “small world” moment for me when I met Jeff.