“I enjoy pulling out gifts that already exist within actors and guiding them to see their own potential.”

You’ve seen Tyler Perry’s hilarious work and David Talbert’s gripping plays, but the buzz of an emergence of a female voice is beginning to be heard around the country. Ericka Nicole Malone has written, directed and produced more than nine stage plays including “I Feel Like Praising Him” and “You Can’t Keep a Good Woman Down.” Her latest project and tenth stage play, “In Love With Tyrone”, is currently making a National Tour.

Ericka Malone is an accomplished producer, director, writer and playwright, whose first play drew an audience of more than 800. After several works, Ericka has toured all across the country not withstanding she held a position with the Pentecostal Assemblies of the World as the national drama director for six years under Elder Noah Nicholson at the tender age of 23. Along the way she has learned important lessons in business such as marketing on radio and television, conducting in-depth interviews, research and development as well as national promotions. 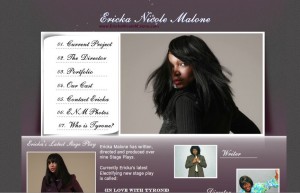 MO: How old were you when you wrote your first play? What was it about?

Ericka: I was 17-years-old when I wrote a play called, “A Piece of the Dream”. It was a play about a girl’s search for her dreams and her understanding of the role that the Civil Rights Movement played in that journey. College students as well as people in the community gave me helpful critiques that helped develop me as a writer. They rallied behind me and encouraged me to continue to produce plays at WKU. They were instrumental in my early success.

Ericka: I think it is a tie between being a writer and director as I like writing roles that show diversity amongst men and women and how everyone handles those challenges differently. It’s funny how any person will react to the same circumstance completely different. I equally enjoy pulling out gifts that already exist within actors and guiding them to see their own potential. Writing is the most challenging in that I have to authentically write different characters from different perspectives.

MO: Where do you draw your inspiration from and how do you manage to stay connected to the audience, regardless of the subject matter?

Ericka: I draw my inspiration from my mother, Eva Malone who I have seen overcome so much throughout her life as well as the women who came before me throughout the decades. Women whose talents were never expressed and their stories were never told. My mother encouraged me to be a writer. She introduced me to other writers who would give me words of wisdom. She picked me up every day after school from my playwriting class and put me into modeling school. She always wanted better for me. She didn’t get that from her own childhood so she is made sure it was instilled in me. My grandmother, Bernice Dickey, was a wonderful grandmother who gave me deep conversations and old wisdom about people and the world. She was an amazing woman as well.

MO: Are there any core or reoccurring themes in your plays?

Ericka: I think a theme that remains consistent throughout my plays is that no matter what you come up against in love and life that God has the power to guide you through it.

MO: You’re currently touring with your most recent play “In Love with Tyrone”. Do you get still get nervous before opening night? What kind of reviews have you been receiving so far?

Ericka: I get nervous every performance and the reviews have been positive and any changes my audience suggests…I take seriously.

MO: Do you have any ideas for your next play? Are there stories or plotlines that you’re looking forward to exploring?

Ericka: I would like to shift to a more dramatic storyline with a comedic flair. I am feeling something in the air for healthy relationships with a couple of challenges that take their relationship through some peaks and valleys.