“We’ve had about 2,000 completed fundraisers raise a total of $2.4 million for things like cancer treatments, organ transplants and all the other out-of-pocket expenses that people face when they get sick.”

GiveForward is an online site dedicated to making fund raising simple and easy.  Based in Chicago, the privately held social venture was co-founded by Desiree Vargas and Ethan Austin in late 2008 with the goal of helping people by providing and effective online tool for fund raising.  The site connects users to a variety of causes and allows them to contribute almost any amount.  While the company focuses its marketing efforts on medical related fund raising needs, the site can be used for any fund raising purpose.  The incredible stories of people coming together for a GiveForward cause have been featured on sites like The Chicago Tribune and USA Today.  The site has also been featured on Mashable.com.

Desiree Vargas graduated from Yale University with B.A. in Latin American Studies in 2004.  Prior to launching GiveForward, she worked as a specialist in collegiate entrepreneurship at the Kauffman Foundation in Kansas City and as an independent consultant for Arabella Philanthropic Investment Advisors.  She is passionate about the role that small-scale donors can have.

Ethan Austin is originally from Southern California.  He graduated from Emory University in 2004 with a B.A. in political science and holds a J.D. from American University, Washington College of Law where he was member of the Law Review. Ethan volunteers for Imerman Angels, a cancer-support organization and also serves on the steering committee for Climate Cycle, a Chicago-based environmental non-profit that helps put solar panels on Chicago public schools. Ethan is licensed to practice law in California.

MO:
How did the two of you come together with this idea for GiveForward.com?  Where did the spark come from and how did your paths cross?

Ethan:
Desiree is the smart half of GiveForward and the one who came up with the original idea for the site.  After Hurricane Katrina, she wanted to create a company that allowed small-scale donors to have a bigger say in where their donations were going. She was disappointed that the only way to raise money online was if you were a non-profit. So, in early 2008 she set out to create a site that would let anyone raise money for anything.

Around the same time I was training for a marathon and had used a personal fundraising page to raise money for a cancer non-profit.  I was able to raise $6000 from hundreds of people all around the country giving $10 and $20 donations and was blown away with how powerful a tool it was. I thought there should be an easy way to empower everyone with this technology, and I wanted to create a website that could do so.

Our paths crossed in 2008 after one of my friends from college met Desiree at a Super Bowl party in Chicago.  When Desiree told my friend she was starting GiveForward, my friend told Desiree that I had an idea for a similar site. I gave Desiree a call a few weeks later and we immediately clicked and talked on the phone for about three hours.  It was great because we both felt like we had finally met someone else who “got it”.  A few weeks later, I came to Chicago for St. Patrick’s Day.  Desiree and I shared some car bombs, agreed that we could both make this work, and then two months later I packed up and moved out to Chicago to help launch the site. 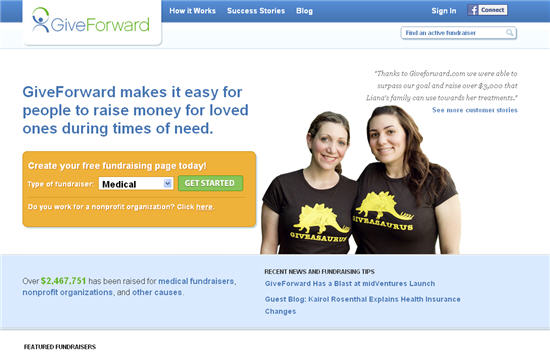 MO:
How many fundraisers have been listed on your site?  What is the total amount raised to date?  What is the highest dollar amount you have seen raised by any given cause?

Ethan:
We’ve had about 2,000 completed fundraisers raise a total of $2.4 million for things like cancer treatments, organ transplants and all the other out-of-pocket expenses that people face when they get sick.  The highest amount raised so far was $88,000 by a woman who started the page for her friend battling renal cancer.  Her page started off as just a small fundraiser between friends and family but then she put it on Facebook and the story spread like wildfire.  When it was all said and done over 600 people from around the world ended up donating.  It goes to show how powerful social media can be when used for good.

MO:
There are many heartwarming and tear jerking stories that go along with some of the funds raised on your site.  Which one strikes you the most and why?

Ethan:
Wow, it’s tough to pick just one.  We’ve been fortunate in that we’ve been able to work really closely with a lot of our users.  Many of them have become like family often staying in touch long after their fundraisers have ended.  Personally though, I think the one that stands out the most for me was a fundraiser one of my law school friends started for her dad who had just been diagnosed with stage 4 lung cancer. This was back in early 2009 when the website still hadn’t gained much traction and we were only getting maybe 2-3 new users per day.  At that time, there was a lot of self-doubt whether GiveForward was actually going to work.  But then my friend was able to raise $12,000, and I could see what a huge difference it made for the family.  It felt amazing to be able to help someone I cared about, and their success made me realize that we were on to something that could be big. 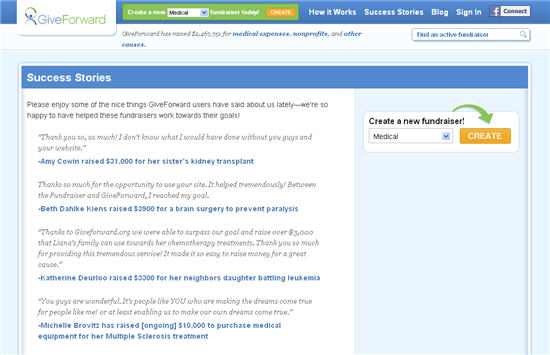 MO:
Aside from your philanthropic passions, did you have any experience running an Internet business?  If not, how did you adapt to the business model?

Ethan :
Neither of us had any experience running an Internet business.  Desiree came from the foundation world and I had a legal background.  Since we had no real idea of how to run a business when we started, we just did what we were naturally good at – being nice to people.  Since day one, our secret sauce has been pretty simple: be kind, genuine and compassionate and treat people the way we’d want to be treated.  We give our users a lot of virtual hugs and high fives and in turn they’ve been great GiveForward ambassadors, spreading the word for us telling their friends and others about our service.

MO:
The site prominently welcomes suggestions and feedback from its visitors.  What types of suggestions have you received and have any been implemented?  Are users influencing the design and/or the process of fund raising?

Ethan:
We get tons of suggestions from our users.  Some are useful.  Some not so much. We try to follow the 37 Signals model of creating a simple product and then iterating only when enough users request a new feature.  The most recent addition we added was a fundraising widget that allows users to post a GiveForward fundraising widget to their blogs, website, etc. Another feature users have been requesting is the ability to donate through Paypal.  We’re going to be adding that in the near future.

As far as the process of fundraising goes, our users have been hugely instrumental in this department.  Several of our users have come up with great fundraising strategies that we’ve then adopted and shared with other users on our blog.  There’s a big sense of community on the site and our users are usually more than happy to share their ideas since they know it will help other families in similar situations.

MO:
You both have somewhat diverse backgrounds.  Desiree went to school for Latin American Studies, Ethan with a law degree for example.  How have these different backgrounds helped serve you as business partners?

Ethan :
I can’t speak for Desiree and her Latin American studies background, but I’m pretty sure I can safely say my legal background has not been particularly helpful to running the business.  Okay, I take that back.  I suppose there was this one time when a donor sent an email threatening to sue us for some reason or another.  She signed her name with the ever-so-threatening and moderately ridiculous suffix, Esq. I responded politely with an email and dropped the Esq. bomb back on her by also affixing Esq. to my name.  She didn’t write back after that. Boom!  Go law school!!