If you’re not familiar with Gary Vaynerchuk, you’re missing out on one of the most energetic, enthusiastic, and memorable personalities on the Internet. Gary, made famous by his WineLibrary TV, is not only a wine expert but also a social media and Internet enthusiast. He knows what it takes to take a small business and make it a success.

I’ve read Gary’s energetic and inspiring books, and have had the opportunity to speak with him in the past. I just recently caught up with him to find out what he’s been up to since the release of his book, The Thank You Economy. 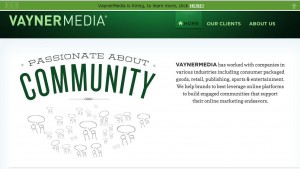 Mike: Almost every business starts out as a small business, and anyone that wants to know your background can read and be totally energized by your book, Crush It! but can you kind of give a little bit of background on how you got your start and what you were able to do for your family business?

Gary: Sure. My dad had a local thrift store in New Jersey, family business. He immigrated from Russia and came here with nothing, and basically moved up from being a stock boy to the owner of the company, so super American dream, a real rags-to-riches kind of thing. He had a nice solid, very successful local wine and liquor store business. I got involved in it, being an entrepreneur my whole life: baseball cards, lemonade stands and all that kind of stuff.

I got involved when I was 14 or 15, started working at the store, fell in love with the industry and basically launched WineLibrary.com in 1996, took over operations in 1998, and basically moved the family business from a $3 million to a $50 million business in an 8-year period.

Mike: You have built up this company and become kind of an online celebrity, and then on August 23, you announced you officially retired from the online wine video production.

Mike: What have you been up to since then, or what are your plans for the future now that you are kind of retired from that?

Gary: Yes, and I sold my family business so I kind of keep an eye on WineLibrary.com, the retail aspect, almost like a board member, but since then, I have been really, really focusing on VaynerMedia, my social media agency with my brother AJ. We have grown from twenty to sixty employees in the last four months, so it is growing very rapidly and is a very new-age agency model company, and I am really excited about that, so I am working on focusing there. We grew from twenty to sixty people in the last four months, and it is going pretty fast.

Mike: That is great. Tell me a little bit more about the company. What is it that you are doing?

Gary: We are doing social media strategy and consulting and community management and campaign work for Fortune 500 brands like PepsiCo, GE, Green Mountain Coffee and Campbell’s around the social media and webspace.

Mike: Part of your success has been based on your impressive connection with your customers, and you talk about the importance of that in your book, The Thank You Economy. You make it seem so natural, like it is so easy. What advice do you have for other entrepreneurs who are looking to kind of connect with their customers?

Gary: Remember that the customer actually pays your bills. I mean, entrepreneurs and businesses and small businesses and large businesses are full of crap when they say, “Customers first.” I have been around business my whole life. People did not think about the customer enough, and that is where the opportunity lies. You know, the way to do this is to actually do it.

Mike: Tell me how VaynerMedia is helping some of these Fortune 500 companies connect better.

Gary: We are not there to change their core culture completely. We are not there to instill The Thank You Economy into companies, but every campaign and the way we do social media–excuse me, community management–is so driven by The Thank You Economy, so our campaigns and our community-management work is very much in line with that thesis, but it is a really weird, kind of new-age digital agency, right?

We are thinking about things we can do with Pinterest, Tumblr, Instagram, Quora and Path, along with Facebook, Twitter and all the normal stuff, so we are really thinking about campaigns, we are thinking about how to use social media across all platforms, including television or print, some consulting, and then, of course, we are attacking and addressing Facebook communities for these clients.

I think that is kind of the best piece of advice, because it is an enormous amount of hard work, and if you are going to put in that kind of hard work, you have to kind of like it a little bit, so I do not think there is a one-shoe-fits-all or there is an industry that makes more sense than another. I think it comes down to your individual DNA and your skill set.

Mike: You mentioned being an entrepreneur since you were a kid. Did you have friends that were also like that, or was it just kind of like you said, in your DNA, or did you have people that you kind of emulated growing up?

Gary: Oh, no. It was super. I was dragging my poor friends who just wanted to play baseball, Atari or Nintendo into selling stuff, so it is super into my DNA, and so I was always the business guy in the crew.

Mike: From a business perspective, even when you were older, did you have any mentors?

Mike: You seem to have your thumb on the pulse of business and technology. In your opinion, I know you kind of rattled off a bunch of new applications, but in your opinion, what are some of the companies, brands or apps to keep an eye on today?

Gary: Pinterest, I think, is the hottest site on the internet. I am not an investor in that. I am a big fan. I am a big fan of Path, which as an iPhone app. It is a closed social network. I am an investor in that. I am very high on that. I think the whole Birchbox and BarkBox and all these Box-deal of the day and month clubs are really interesting, but Pinterest and Path, to me, really stand out.

Mike: Yes, so we talked about VaynerMedia. What other things are coming up? I know I took a look on TechCrunch. You have invested in several different companies, the Next Wave show that you do… Tell me a little bit about that, about Next Wave.

Gary: The Daily came to me, the first newspaper on the iPad and wanted me to contribute about my two cents, kind of like what we are doing right now with the last question you asked me. I thought it would be a fun outlet, very quick, five minutes. It takes up only twenty minutes of my day once a week, so it was low-cost. It was in midtown Manhattan. I am here in that, so it seemed like a good deal, a good financial deal, and you know, I am a businessman, so I kind of saw what I liked about it and got involved and I have been executing against that.

That is kind of that deal, but 2012 is going to be a boring year for Gary Vee – a lot less speaking, less limelight, less out there, head-down. Building VaynerMedia is 95 percent of the goal.

Mike: Okay, so I will not expect to see you as much on Twitter or as much on Google+ as I have seen?

Gary: No, I think I will be there. I mean, I am always going to engage with my community, but less keynotes, less public appearances, less TV appearances, a hell of a lot less of what I am doing with you right now, you know, interviews.

Mike: One question that has really kind of engaged me since I first heard of you, you have such a tight bond with your community. On Twitter it seems like you are always answering people far more than anyone else, and there is a lot of direct dialogue taking place. That has to take up a ton of your time. How do you do it? How do you keep up with all of that?