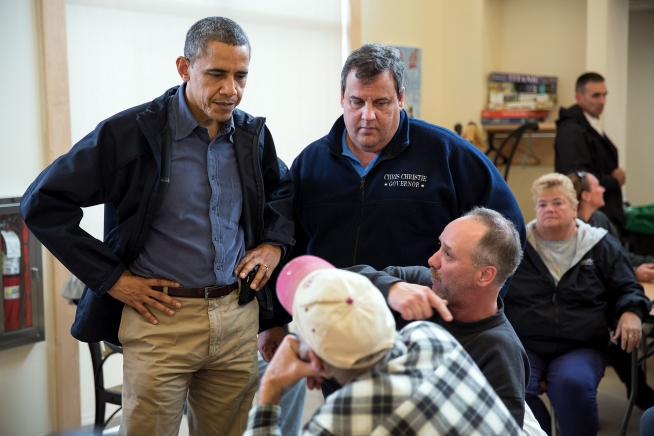 With the election finally over, our leaders now have a rare opportunity to settle their bitter differences and work together to resolve our nation’s vexing problems. Ironically in the midst of both a political storm and a major hurricane, we may have actually found our way.

President Obama and New Jersey Governor Christie were able to rise above our current state of polarized politics in order to forcefully respond to a natural disaster of historic proportions. If these two leaders were able to work together so effectively in the concluding days of a divisive political campaign, Congress and the White House can surely follow their example in the coming months and years ahead.

As so many of our fellow citizens struggle with the loss of loved ones and the destruction of their homes, general complaints about the size and scope of government quickly dissolve into loud cries for a quick help. For this is when we truly become the United States of America. Our federal system is well positioned to step in and support individual states when they are overwhelmed by an emergency. However, it cannot do so effectively without the cooperation of state and local officials. The teamwork provided by the New Jersey Governor and the President must become standard operating procedure as we work to recover from the perfect fiscal storm of the Great Recession. President Obama’s “15 minute” rule for returning phone calls should remain in effect for all federal agencies as should his orders for “no red tape” and finding a way for bureaucracies to “say yes” to requests for assistance.

Governor Cuomo and Mayor Bloomberg have also taken the lead in helping our nation refocus on the cause and effect link between climate change and severe weather patterns. Here again we must rely on science instead of divisive politics. What bipartisan policies can we establish to help prevent or limit damage from future super storms? Do we need better building codes and local zoning requirements in coastal areas? Should we take another look at “cap and trade” proposals with respect to carbon emissions? If so, could we use these revenues to fund FEMA or help reduce the deficit? Whatever we as a nation decide, it is clear that the response to Sandy provides a map to much more effective governance. Let us follow it.