Ian Aronovich wants to make it easy for consumers to find government seized and surplus merchandise from all over the country. He created GovernmentAuctions.org, a site that compiles and provides information about government auctions for all of these goods.

The site notifies users of government auctions near them, foreclosures, seized vehicles, and even pre-foreclosures. They have been featured on CNBC and Businessweek and are proud at the turn around they have been able to accomplish since the hit of the recession.

MO: What gave you the initial idea to create a website that aggregates all of this information?

Ian: I went to several local government auctions, and saw surprisingly few people in attendance and a bunch of really cool stuff sold at good discounts. I figured a site that makes folks aware of auctions and items would be in high demand. 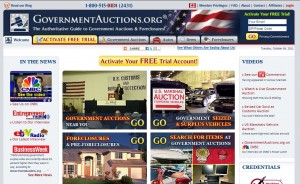 MO: What do you think is the biggest misconception people have when thinking about purchasing things from a government auction?

Ian: Many people think they will be able to get High-ticket, high demand items for pennies on the dollar. You can get pennies on the dollar deals on occasion and you have to work at it, but you’re not going to get a late model Mercedes for $500, or even for $5000 for that matter.

MO: You mention that you have a “top secret project” to widen the scope of customers. Can you tell us anything about your next steps that isn’t top secret?

Ian: Well we can tell you that is going to be a new site and that it’s going to get a lot more people familiar with government auctions.

MO: I notice on your site that you can activate a FREE trial account. Is your revenue model free at first and then a paid subscription? How did you decide on this revenue model?

Ian: Yes. Exactly. It’s a free trial, and then a paid monthly subscription follows (cancelable any time). We actually started off with a revenue model where we would just charge one sum ($40) for a year of membership, but when the recession hit, our new membership registrations began waning, and we had to think of another revenue model to stay afloat long term.

We realized several things. First charging a sum upfront made the proposition too risky for a potential customer since they were paying upfront for a service they didn’t know they would like, especially in uncertain economic times. To remedy that, we instituted a Free Trial, and that dramatically reduced the risk to the customer. Additionally, we realized that we never gave thought in our initial revenue model to what would happen to a member once the year was up, and so we were leaving alot of money on the table from members who liked our site and would have renewed if we gave them an easy way to do it. So we instituted monthly billing (with easy cancellation if one wants out).We did a bunch of price testing in 2009, and that’s how we ended up with our current monthly $18.95 price. We really turned our fortunes around with the new revenue model, as we’ve been thriving with it.

MO: How do you establish your credibility as a e-commerce site?

Ian: One of the main ways is media attention; and we’ve always received alot of that. Media, more than anything, has enhanced our credibility. Secondly we’ve been members of the BBB for a while (with and A+ rating BTW) and we’re certified for privacy by TRUSTe, and most consumers recognize those logos on our site, and appreciate that we submit our business and privacy practices for evaluation to what are really the two blue ribbons of consumer watchdog groups. Finally, we have a phone number on our site that any potential member can call and speak with a friendly human customer service agent (during business hours). The fact that you can just pick up your phone and call us is very reassuring to people. Finally, a bunch of authors have put us in their books, and that too buttresses our credibility.

MO: How have you managed to gain traction for your site?

Ian: We’ll, we started off with $5 in ppc advertising, and it just took off. We obviously scaled up a lot since then and we spend a lot more now on PPC. We also do lots of PR, which continues to gain us more and more media attention. And we do lots of social media, including Facebook and Twitter, where our fan base and followers, respectively, are consistently growing.