“The interface needs to be eye-catching and it should be frustration-free for users with remarkably short attention spans.”

Ila Mehta is the Founder of Little Write Brain. Ila is a mother, she has two children and found the books written for kids to be too commercial. She envisioned a better way for parents and kids to interact and create their own story books tailored to each individual or family. Little Write Brain is a personal story book creation platform. It allows users to create and customize characters, choose a setting and write a story. It allows for a lot of customization in terms of design, style, and writing. When the book is done, it is paid for, bound and shipped to the author. Little Write Brain is already winning awards only 6 months after launch such as the Parent Tested Parent Approved Media Award.

MO:
The first thing that struck me was the quality of the design on the website. I actually played with the story book creation platform and was quite impressed.

Could you tell us how people normally hear about Little Write Brain and how they interact with it? Is it something a parent does with their kids as an activity or do kids simply do it all themselves (excluding the payment of course!)? 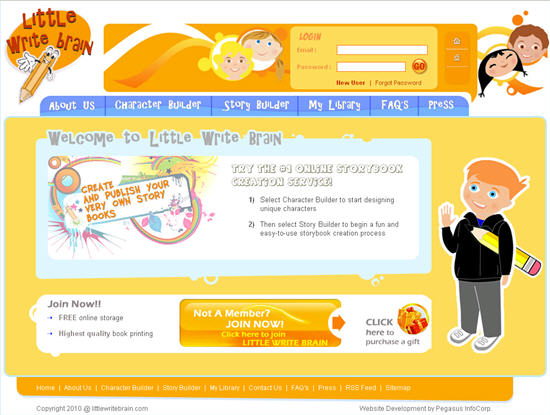 Ila:
Thank you so much. Our website is aimed at children ages three through eight. We generally find that children begin to grow quite adept at maneuvering a mouse and playing with computer games between the ages of three and four. At LittleWriteBrain.com, younger children can work with their parents or an older sibling to read the storybook content and navigate the plot. The actual literary level of the storybooks are appropriate for independent readers between six and eight who will be able to use the site without assistance. While, as you mentioned, parental involvement is required to make a book purchase, children can still save unlimited e-books on the site for free. We do require that all registered users certify that they are at least eighteen years of age. 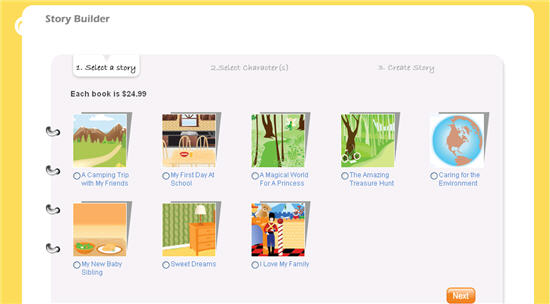 MO:
It took 2 years to build Little Write Brain. Could you tell us a little bit about how you actually went about finding the skills and talent necessary to make Little Write Brain a reality? What sort of investment did you take on?

Ila:
The concept of an online storybook creation tool came to me as I began to grow disenchanted with the quality of children’s literature you typically find in large commercial bookstores. Most of these stories take on a one-size-fits-all approach to children’s experiences and their families. Other books seem to serve as promotional add-ons to popular TV shows and upcoming feature films. LittleWriteBrain.com draws children much more deeply into the story making process. Children can select characters that more closely resemble themselves and their families, or anyone they envision for that matter. They can develop a storyline according to their preferences and modify illustrations. During the development phase, we took great pains to ensure that any type of family – traditional, single-parent, multi-racial, single-sex parents, older parents – could be accommodated.

Once the concept had been clearly defined and mapped out, we began to solicit proposals from software development firms in the Midwest. Due to the complexity of the technology architecture, the fees associated with the development were nearly triple of we had budgeted, which drastically affected our business model. In a sense, we would have had to sell our book at nearly $100 per print just to recover our costs in 3 years! And that’s just according to the model. In reality, nobody in their right mind would purchase a children’s book for $100.

Somebody I knew suggested some offshore development firms. The quotes we received from them were well within our budget. I selected a firm in Mumbai in 2008 and have continued working with them since.

Funds have largely come from my husband and me, plus a few angels.

MO:
You used outsourcing partners to develop Little Write Brain. There is definitely a stigma attached to the word and it’s rare to hear the success stories from outsourcing. Could you tell us about your experience and what you learned about outsourcing software development?

Ila:
I think that the stigma associated with outsourcing and offshoring is largely undeserved. In Little Write Brain’s case, our company could not have even existed without an offshore partner due to costs. Of course, there were some difficulties in the offshore relationship at first. For one, the Mumbai firm did underestimate the time to completion due to the complexity of the architecture. Also, I was a non-technologist trying to create technology. So, for a long time, there seemed to exist a perpetual disconnect between what I had envisioned and what ultimately materialized. Numerous changes to the scope, as well an extra-long phase of testing and re-testing delayed the launch date by about eighteen months. In spite of the initial frustrations, I am happy to say that both thought and production are very nicely coupled at this point. My project manager at the offshore firm is outstanding.

MO:
Small children and technology is a niche that isn’t talked about much in the greater scheme of the tech world. What have you learned about engaging small children online? Presumably one markets to the parents but attracts the kids. What sort of techniques have you used to balance your marketing efforts and engagement?

Ila:
I think that technology aimed at small children may not get much buzz in the tech world because the technology must be simple enough to be used by a very young learner – there is nothing tremendously fancy or slick about the technology behind LittleWriteBrain.com, or any other similar ‘edutainment’ site for that matter, compared to online media software used by adults. However, I have learned that technology development for this market can be quite tricky. It must be very simple to use. The interface needs to be eye-catching and it should be frustration-free for users with remarkably short attention spans. Believe me, adult Windows users and iPhone followers are far more tolerant of glitches and snags in technology than are small children, which is why the testing phase took such a long time.

The best way to approach young children is through their parents. I have worked with many mom bloggers, parent publications and a few advocacy groups that champion and celebrate non-traditional parenthood. I am also exploring the possibility of introducing the site to kids in elementary schools. Parents have to like and trust the site before their children can have a chance to try it out.

MO:
What are the challenges of running a startup with a family? How do you balance family life and the life of an entrepreneur?

Ila:
Managing a start-up is like having another child. You feel solely responsible for its care and sense an unceasing insecurity that you could always be doing more for it. I have been able to free up time mostly by outsourcing non-core activities to external partners, such as software maintenance, SEO marketing, and book printing and binding. For now, I am fully focused on customer relations and promotional activity. My husband is very supportive, which helps hugely.

MO:
What are your plans for Little Write Brain into the future? Are you adding more characters, stories, expanding your core offer?

Ila Mehta:
There are always ideas floating around. We could expand the list of physical features for each character. Or we can create an iPad app. Right now, the immediate goal is to promote the site, release more books and build a customer base.