“…all you need is a good idea in 140 characters and you can participate and earn a decent amount of money.”

James DeJulio is bridging the gap between creatives and businesses that need them through Tongal. Tongal is the leading creative social platform that empowers companies to tap into its crowdsourcing model to concept and produce video campaigns. Since video is the future of online content, and Tongal is a way for brands to source high quality content at a fraction of the cost of “traditional” means while propelling undiscovered talent, Tongal is pretty exciting. This win-win business concept was developed in 2009 by our interviewee James DeJulio.

Through Tongal, James has assisted established multinational brands (Mattel, Allstate, PepsiCo), exciting new companies (Popchips, FreshPet) and non profits (Kiva, Donor’s Choose) into the video crowdsourcing space. Before Tongal, James was the co-founder of Half Shell Entertainment and Vice President of Production for The Robert Evans Company at Paramount Pictures. 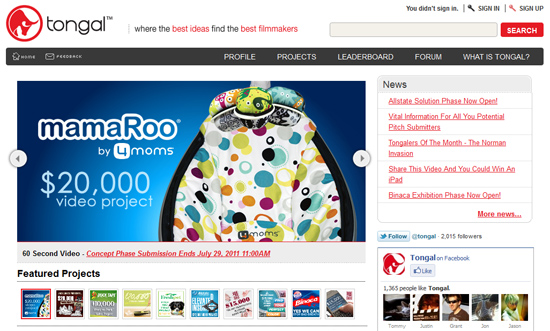 MO:
Tongal is an AMAZING business concept. Talk us through where this idea came from and how you brought it from idea conception to business implementation.

James:
The whole thing was a kind of “back of the napkin” business plan. Rob Salvatore, Mark Burrell (Tongal co-founders) and I had founded a company called Half Shell Entertainment to develop content outside the Hollywood studio system. We had some mild successes in deals with HBO and National Lampoon, but we’re ultimately a little frustrated with how hard it was to get story (notably the stories we wanted to see) to screen and with the oligopoly on creative work. We were talking with Jack Hughes (TopCoder founder) and joking around about applying the TopCoder model (crowdsourced software development) to creative work—we focused in on the concept that in most cases, people who have the best ideas, aren’t the best executors, so we applied that to creativity–next thing you know, there was Tongal.

MO:
I am always interested by platforms such as Tongal that require market for the other to see value in the site, and vice verca. Which came first, the talent or the businesses, and how do you recruit on both ends?

James:
One of the factors that convinced me that Tongal was a worthwhile proposition was that I knew so many people here in LA that were spending their own time and money to do spec work (reels, scripts, etc.) with absolutely no indication or insight that the work they were doing was something that the market wanted. You know the clichés—“I’m a waiter, but what I really want to do is direct…”

At the same time, social media caught fire and I realized that brands and other businesses were going to need a lot of content, and ultimately these creators. Since I knew the old content development and production model was broken, I knew there was a value proposition for both sides–so we began to market to both. Initially, we just invited our friends to the private beta test—luckily, we knew a lot of creative types who had fun with it, so it worked out and was a lot of fun. At the time, this was a pretty crazy idea and we had to do a lot of explaining to creators and to potential clients—but once we had a strong example of the output, created and influenced by multiple creators, it became an easier proposition. From there it really grew on its own. Everyone loves a meritocracy.

MO:
I really like the leaderboard aspect of the Tongal site. Can you speak about this from a business standpoint on how it is helping the overall business plan?

James:
I love the leaderboard too and am excited by it because it’s really in its infancy. We have a weighted formula that applies points to each phase of a competition. The formula takes into account prize level, participation, difficulty, etc (kind of like a golf course rating or something). Our entire process is rooted in game dynamics. Things like residual payments and collaboration incentivize a lot of participation and interactivity. Once someone gets a “win” the rate of recidivism is outrageous—so first and foremost the leaderboard and point system is a way to keep users engaged and participating. In the future, we hope to use the point system as a way to make the Tongal virtual work experience more like a more physical work experience, so, if you do good work over the course of a year, and amassed certain point totals, you’d get a bonus at the end of it.

Also, it’s a way for us to empirically rank creators skill sets and make higher profile work available to them. For example, we have a tournament style video project that’s gotten a lot of adoption lately. Users take a winning Idea and “Pitch” it. Winning Pitch creators get a production budget and a guaranteed prize payout. Pitches include text, storyboards, video, etc., but one of the key factors brands use to determine which Pitches they select is status or rank on the site. That rank shows that you, as a user, can deliver high quality work that’s on point to big name clients.

MO:
Tongal relies heavily on social media. Can you talk about some of the best practices of social media that Tongal uses to make sure they are utilizing social media effectively for this specific business model?

James:
Since there is no barrier to entry, and since the Tongal process was designed to let anyone with a good idea into the creative process, brands are seeing this as a tremendous opportunity to tap their social graphs and core consumers for insights and ideas, as they’re the ones that live with and love their product offering. Which is why we talk about Tongal as a social media solution with an ROI. You get to have the “conversation” but you also get valuable video assets at the end of it (that would have cost you 10x any other way).

For example, we just launched the first of a series of video projects with a really innovative child product company called 4Moms that makes a popular baby swing and a stroller. They’ve amassed a huge network of Mom “Insiders” on their own. We’ve actively promoted the project to this group and we’re getting tons of Ideas and Stories from real moms who already love this product submitted to the site. Those Ideas and Stories will be the foundation for the video output.

MO:
When many people first hear of the concept for Tongal they think they can’t get involved if they don’t know how to make videos. Can you talk about the other aspects of the process and how those with zero video experience can get involved?

James:
First and foremost, as I mentioned before, all you need is a good idea in 140 characters and you can participate and earn a decent amount of money. We’ve had users make over $2,000 for a 140 character idea when you calculate the prize money and residual payments.

Second, we sometimes have a Prediction round, where users try to predict which videos or ideas the sponsor is going to select. This is a way for the community to exude influence without “voting” which we disliked the idea of from the beginning. It’s kind of like an NCAA bracket for Video.

Lastly, we have prizes just for sharing content effectively. Anyone with a big network can share a video in our “Exhibition” round. Users get points for every view that can be attributed to their “shares.” As you amass certain point levels, you unlock prizes (gift cards, iPads, trips, cash, etc.). We did a project with Binaca breath spray a while back for movie parodies where users “cast” Binaca in a starring role. We got great results. One of my favorites was a parody of “Fight Club.” During the Exhibition Phase we saw the Binaca “Fight Club” video get a big spike in views so we looked into it and saw that Chuck Palahniuk (author of Fight Club) had joined the site, and exhibited the video to his Facebook and Twitter feeds. Good thing I’m typing this, because I can never pronounce his name…

MO:
Previously you were the VP of Production for The Robert Evans Company at Paramount Pictures. What caused you to make the switch into starting something on your own?

Honestly, I got my hands on the manuscript for The DaVinci Code, read it overnight, loved it, and submitted it to the studio the next day. They passed on the material, based on bad coverage from the story department (framed in my office now). That summer when the book came out, every time I was in an airport, it seemed like the one thing everyone was clutching besides their boarding pass was a copy of the book. Every time I saw that it was salt in the wound and I knew that I had to try to shake things up.