“It has taken a lot of time, effort and cash to get where we are but we’re lucky to have something that people compare to Duck Tape and Zip Lock bags. Pretty cool!”

Inventor, Jeffery’ Dahl, from Medford, Oregon, has invented a new type of fastening system that is safer and easier to use than the traditional bungee cord.

LoopRope is a revolutionary fastening system that absolutely eliminates the daily use of dangerous and limiting bungee cords, tangled cargo nets and most other light to medium duty tie downs.  There’s nothing on the market as versatile as LoopRope. LoopRope is fully adjustable they NEVER tangle and they’re linkable.  It’s the only tie down that goes from securing gear to your car, truck, SUV or RV to securing the same gear to your raft, Quad or ATV to using it on your back pack or pack frame to being used as a clothesline at camp or in the trees. The uses are amazingly endless!  Whether you’re using LoopRope for work or play, you’ll quickly find yourself saying, “Grab the LoopRope!” LoopRope is Secure, Fast and Easy! 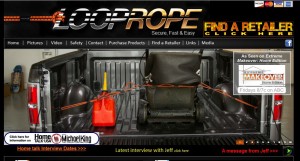 MO: Clearly, my first question is going to be what inspired you to invent LoopRope?

Jeff: I have never been good at tying knots and when I would tie a knot I was always worried that it would come undone and lose my stuff anyway. Feeling like this I would always way overdue my knots and end up with a big mess.

So I was at the disposal station one day untying a rats nest of a knot. It occurred to me that manufacturing a rope whereby loops would come out of the weave every so often would allow a user to ziptie loops together to create the tension needed. I went directly to a boat store bought a rope, tied hitch knots in it with big loops on each end and proceeded to move from one house to another using it. It worked great! I took those prototypes to a Patent Attorney a couple weeks later and said, “I would like to patent this!” He said, “Patent what?” and I said, “A rope with hitch knots in it.” And the process started. I started prototyping and experimenting with different materials sewing ropes together and crimping them together and such. I found that zip ties worked but you always had to have them on hand plus you had to cut them so it generated waste and I found that zip ties can fail. So after many prototypes I have landed on what it is today, a bungee product that’s fully adjustable, safer than j hooked bungee cords, it never tangles, their linkable and they last a long time.

MO: How long did it take from the moment of inspiration to commercialization? Was a rocky road or straight forward one?

Jeff: I had a one track mind. The timeline has been very fast. I thought of it and named it on the same day in summer 2009. LoopRope went patent pending Christmas Eve 2009 and we had our first display rack in a local store here in Medford, Or in June of 2010. We are now in over 1,500 stores with shipping ropes internationally as well as on the USMC base in Yuma, Az. I’m pretty excited about the military applications. It has taken a lot of time, effort and cash to get where we are but we’re lucky to have something that people compare to Duck Tape and Zip Lock bags. Pretty cool!

MO: Have you invented anything else? If not, would you like to, or is one product enough?

Jeff: That’s just it, I have always wanted to create something. Many times I have thought of different things technical and not so technical but have never followed through with it. Just like millions of people that have an idea and then that’s it. Inventing the easy part, doing something about it and getting on a shelf is another. With LoopRope I just new I had something and I went for it not knowing the slightest about the road ahead. I refer to it as LoopTechnology, so it has me working on a couple of other things using the same principle. We have BuoyRope and TravelTrainer already. BuoyRope is already to market and TravelTrainer is patent pending but as of yet it’s on the shelf waiting for its time.

MO: You’ve managed to get LoopRope on the shelves of Wal-Mart. How difficult was it to convince them to stock your product or did they approach you?

Jeff: People ask me all the time what was it like going back to Bentonville to pitch. People who have product want to pick my brain on how to do it. Many folks say it takes years to get in and that’s if you’re lucky. Well I’m one of the lucky ones. We exhibited at the National Hardware Trade Show in May of 2011 and the Walmart buyers just loved it. Literally 5 different category buyers were standing around saying this could hang in 5 different areas of the store plus there was BuoyRope for the marine section. I knew it was a positive sign when they all took samples with them and not ask us to send them samples. 2 weeks later we were filling out vendor forms. Truth be told, the filling out of the forms proved to be the most difficult task. It took about 2 months to get one item set up in their Retail Link. Thank God for our Operations Manager, Danny D, for having previous experience with Harry and David and accomplishing this task for us. That was a lot of work!

MO: How many countries are is LoopRope currently selling in? How does it feel to have broken into the international market in less than a year?

Jeff: We have a licensee in Ireland who is currently working on distribution channels into the UK, Germany, Qatar, Turkey, DuBai and the UAE. I have sent ropes to a company on the Mediterranean Sea in Lebanon. A large marine distributor in Japan ordered a bunch of BuoyRopes for a test ther. I have shipped ropes to the Philippines and we are in stores in Australia and shaping to have some stores in New Zealand. We have filled out vendor forms for Canadian Tire (the Walmart of Canada) for a Spring rollout. With requests coming from around the world!

It feels pretty incredible to have as much international energy as it does domestically. There are a lot of tie downs and stuff out there but there’s truly nothing out there like LoopRope, it’s more like a tool than a tie down. So for people to recognize this from afar is confirming and motivating.

MO: How important is it to you that LoopRope is made in America?

Jeff: You know I tried that. I swore these were going to stay here and we are still making some here in Medford but the truth is we had to go over seas for the masses. The price point is under $20 at the retail level and unless folks didn’t mind spending $40 for a rope it had to go over there. We found an American company in Commerce, Ca that we partnered up with who’s in the textiles business. They over see all manufacturing and warehousing for us.