“One of the most important things I learned thus far is timing.”

Interview by Kelsey Meyer of The League of Innovators

JM Kubera achieved a BS in Accounting, taught himself programming and website development, launched a few sites, many failures, and found his true calling in entrepreneurship.  He has learned that no matter how great the idea, it is the execution of those ideas that is the single most important aspect of entrepreneurial success.  His newest venture is Discountwithcash.com.

Discountwithcash.com is a site that aims to provide customers with a list of local businesses offering a discount for paying with cash as opposed to credit card.  Why is this site needed?  Credit cards are the highest tax on goods and services you have never heard of.  Merchants pay fees every time they swipe your credit card and of course they increase the price of what you buy to cover that cost. You are paying extra for the convenience to use your credit card. Is it worth it? Sometimes it is, but most times it is not. Especially with some businesses offering a discount when you pay with cash. Since DiscountWithCash.com is in its infancy they are currently looking for savings savvy customers that know of businesses offering the discount. So next time you are at the register, ask for a discount for using cash. If you get one, make sure to share it over at Discount With Cash. 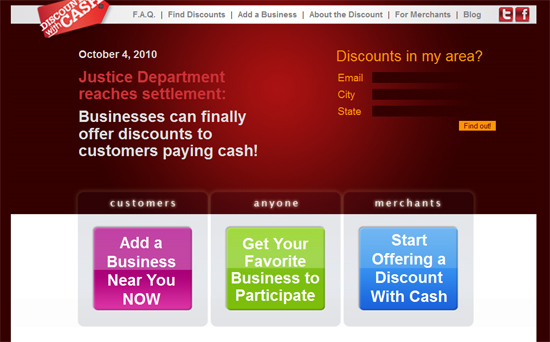 MO:
I love your viewpoint of execution being the most important aspect of entrepreneurial success.  Can you tell us what you are doing differently with the execution of Discountwithcash.com that you believe will make it successful?

JM:
With every venture I undertake, I know a little bit more than I did with the one before, which helps tremendously.

One of the most important things I learned thus far is timing. I can’t tell you how many times I’ve thought of something, performed my due diligence, and found it existed in some form or another. It’s nice to know my ideas are in practice, but I would often wonder why I couldn’t think of them sooner. Alas, timing.

Five years ago, DiscountWithCash.com wouldn’t have had a chance. But today is a different story. Consumers are becoming more aware of the costs merchants incur associated with taking credit cards. The smart consumers understand that everything they buy is actually at the credit card price, because what merchant wouldn’t include their processing fee? There are many stories circulating today about credit card reform and many people’s eyes are being opened to the largest tax they’ve never heard of; something merchants have known ever since the inception of the credit card. So timing is one of the biggest factors to the inevitable success of DiscountWithCash.

MO:
This is an interesting idea and I could see it definitely taking off.  What do you see as your largest challenge starting out and getting this site off the ground?

JM:
Collecting businesses that offer the discount is my biggest challenge. I spent a lot of time thinking about the task. I considered running contests for those that found the most businesses, but I soon realized that I would potentially have a database full of businesses that may or may not offer the discount. There is really no way for me to police that. I decided to hire a telemarketing company (don’t cringe, I dislike them too) just to call local businesses to ask if they offered the discount. I made sure they would call as if they were potential customers, instead of actual sales people pushing my site. I also make calls myself. Slowly but surely the database grows and soon I’ll be contacting local news organizations about the list I’ve accumulated and see what happens from there. I would like the database to eventually start growing from consumers adding businesses because calling on all the businesses in the U.S. is impractical.

MO:
I see on your website that you offer merchants free marketing materials to let customers know that they can receive a discount with cash.  Do you currently, or are you planning on, offering customers any incentives for adding stores to your lists?

JM:
As I mentioned before, there is the potential for customers to add stores that don’t offer the discount to get ahead in the contest, therefore incentives are not on the table at this time. However, considering the power of Facebook & Twitter, I will definitely be running contests and incentives for fans of our Facebook & Twitter pages. But, you have to be a fan to be considered!

MO:
I believe you can learn a lot from failed ventures, and your bio tells us that you openly admit to a few failures.  Can you tell us about one site you launched that failed, and what you learned from that failure?

JM:
The biggest failure I had was a site called Interchange Exchange. The goal was to create a site similar to Lending Tree, but make it for businesses looking to buy credit card processing services. I used to work in the credit card processing industry and I realized merchants had a lot of disadvantages when it came to acquiring those services. The idea to create a website where companies would compete to offer small businesses credit card services seemed like a no-brainer. After performing my due diligence I began working on the project. I hired a company to start coding and I worked very hard on the business plan. It wasn’t until about a year later did I find a competitor had arrived onto the scene just about the same time I had. At the time their name was TransFS and it was apparent they were in their infancy, but they were still ahead of me. They already had clients and even a collection of processors in their system. I didn’t even have a beta platform out yet. Although I was in the industry and I had a lot of contacts, that first mover advantage was so important. The cards were stacked against me. I was alone trying to start an industry changing business on the internet that already had a competitor. I was way out of my league. A few years after I looked up TransFS, which had changed to FeeFighters, to check on their progress and they had actually secured VC funding. I couldn’t have been more proud that an idea I had started working on actually secured VC funding. But this gets back to execution. The idea isn’t really worth much if you can’t execute. 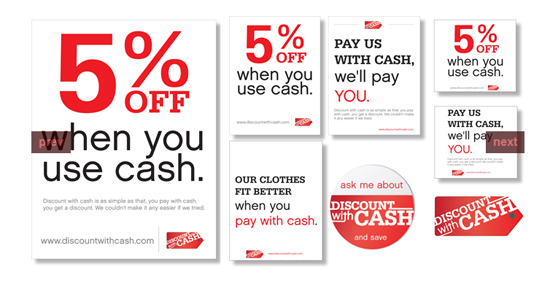 MO:
Many people are skeptical that stores can actually offer you discounts for paying with cash, what facts can you share with people who may question this concept?

JM:
Their skepticism comes with good reason. In the past, the credit card companies have made many attempts to thwart merchants from offering their customers a lower price for alternative payment methods. It wasn’t until October 2010 that the Justice Department stepped in and sued Visa, MasterCard, and American Express for anticompetitive practices. As a result, merchants were finally allowed to offer the discount. (Justice Department’s press release. http://www.justice.gov/opa/pr/2010/October/10-at-1115.html

If that wasn’t convincing enough, I also often cite Visa, MasterCard, and American as they all explicitly allow merchants to offer the discount.

MO:
You have a great passion for entrepreneurship!  Do you have any other ventures up your sleeve that we should be on the lookout for?

JM:
I’m always thinking about new ideas, but I’ve had one in mind that I really want to see materialize. One of the ideas I brainstormed once was a collection of knowledge that would help people “catch-up” to those with existing experience. A “if I had known then what I know now” type of site that taught inexperienced people in various subjects “the ropes” so to speak. The idea I currently have in mind is a subset of that concept, but it has to do with choosing a career. I believe a lot of people have trouble choosing a career and subsequent career path. I’ve been thinking about a way to make that process much more intuitive and making different careers available to those that would otherwise not have the opportunity.