“…we saw a huge spike in traffic as well as new debate topics and responses. It was thrilling!”

John R. Cushma encourages you to argue.  His business thrives on it!  WeDebate.It is a website whose name speaks for itself– they debate everything!  From religion, politics, sports to pop culture, they debate everything!  Started in January of 2010 by founder John R. Cushma, the website is constantly gaining users.  The newest loyal user: Politicians.  Several political campaigns have contacted WeDebate.it asking if they can post their campaigning issues on the site to get feedback from both local and national opinions – and of course they agreed.

The idea behind WeDebate.it is simple.  Freedom of speech should cover all topics.  Whether you want to debate which is better Pepsi or Coke, or whether or not Google’s new ad campaign promotes homosexuality (their most debated topic) you can have a voice in WeDebate.it. 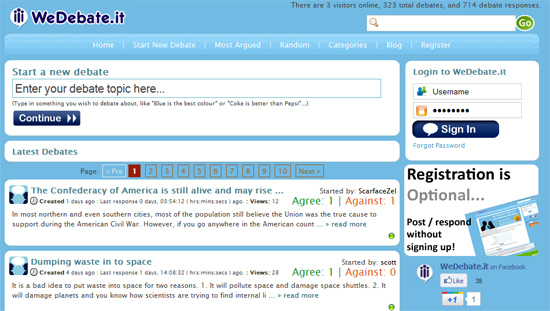 MO:
I love the idea for this site!  As is the case with most new user-generated-content websites, gaining traction takes time.  What has been your most effective way to promote the site?

John:
Word of mouth without a doubt as well as having people write articles on us.  Plus our team (Dana DelliGatti & John Brown) both blog and they have their own respective followers that constantly drive traffic to the site; anytime they post anything, we blast it over all of our twitter accounts, facebook…you know the run down. Plus our users are very loyal at retweets, reposts and forwarding emails.  Every day we gain new users which tell us we are doing something right!

MO:
Freedom of speech can at times be a sticky topic.  Do you censor any of the debates for inappropriate or hateful comments, or is it truly open to any and all topics and comments?

John:
Free Speech can be difficult to decipher between freedom of speech and hate speech and we are definitely NOT lawyers; however, 99.99% of the time we let people speak their mind.  Hate speech is not something we tolerate because our objective is not to start a war (or give ammo to a war that is already existing, if you catch my drift), but rather let others speak their mind in a respectful, relevant manner.

MO:
With an idea for a website about debating my first thought is that you were previously a lawyer?  Can you tell us a little about your personal background and how it led you to creating WeDebate.It?

John:
Oddly enough, my background is in banking and small business, not law.  A little bit about myself.  I graduated from Duquesne University (Pittsburgh, Pennsylvania) in 2007 with my Bachelors Degree in Entrepreneurial Studies.  I have owned a number of small businesses and websites throughout my short life, and have gained a wealth of knowledge with the few successes, as well as the many failures.  My biggest success thus far was my creation of the entire “Buy Twitter Followers” concept.  I actually did a big write up on my personal blog (http://www.johncushma.com/blog/how-i-created-a-twitter-phenomenon/).  Even though I sold my “Twitter Follower” venture a few years ago, I still get a kick out of the fact that tens of thousands of people from all over the world are either making a living or some supplemental income thanks to an idea that I had in a hotel room in Houston, Texas.  My ventures have spanned from an aircraft brokerage business, outdoor entertainment gaming, clothing lines,  e-commerce websites, small business consulting, travel websites, aviation websites, search engines, auction websites, review websites, and more… I enjoy learning about every aspect of the business and trying to do as much as I can on my own.

I created WeDebate.it in early 2010, but was too busy with work and some other side projects to really focus on the site.  In late 2010, I was finally able to focus all of my attention and finances on WeDebate.it.  I sat down and gave the site a massive overhaul as well as adding new features and additional functionality to the site.  From the moment our re-vamped site hit the masses, we saw a huge spike in traffic as well as new debate topics and responses.  It was thrilling!  Anytime we have a new article or blog posting, we see a significant spike in new members, as well as active registered users.  The most unique feature of our website is that a visitor can create a new debate or respond to a debate without signing up.  In conclusion, I see a bright future ahead for WeDebate.it.  We currently have an iPhone application in the works as well as other enticing features to make our site more sticky to visitors.   Also, check out the YouTube link on the footer of our site.  We currently have (7) videos created by users that range from a Professional Basketball player mentioning our site before making a slam dunk, to an unemployed ninja doing flips, to a man dressed as a banana asking people to vote for bananas on WeDebate.it.

MO:
With politicians beginning to take advantage of your site do you see the site turning into a strictly political debate or will you take action to keep the light-hearted “Baseball is the Best Sport in America” debates active on the site?

John:
We want any and all topics up.  Yes, we love that politicians are utilizing our site for their platforms and letting real people tell them what they really think.  If you have ever been to a political rally, there isn’t much time for people to speak their mind about that particular candidates stance—this allows the candidate to have their team take the time to review what real people are thinking…and we love this concept.

MO:
I see that there is a Weekly Leader board feature on your site.  Can you tell us what this entails and why you decided to include this feature?

John:
The Weekly Leaderboard displays the registered members on our site with the most “debate points” for the current week.  Registered users will receive 2 points for each new debate and 1 point for each debate response.  The way the contest currently runs is that a cash prize is paid out to the first place winner each week.  Users can view live stats on our contest page, as well as view winners from prior weeks.  As soon as our user base picks up a bit more, we will be looking to add additional prizes as well as payout positions.  Users that post topics and responses anonymously are not eligible for this contest.  The reason that we created this contest is to provide our loyal and most active members with some sort of reward for helping WeDebate.it grow!

MO:
I know that the Google Ad campaign is the most argued debate on the site, but what is your personal favorite?

John:
This was a great question that I had to throw to Dana and JB.  Thus far is goes like this:

Cushma: “Baseball is the best sport in America” – Oh yes!

Brown:  “Early marriage should be encouraged” – because that is hilarious to me!