“The gaming industry is a much better macro than I ever imagined, it is without a doubt one of the most fun and engaging places to be.”

A college entrepreneur, Justin Beck started PerBlue in 2008 while attending the University of Wisconsin-Madison. Together with Co-founder Andrew Hanson they took a seed of an idea and turned it into Parallel Kingdom, a mobile and web-based video game enjoyed by more the 800,000 players worldwide.

Parallel Kingdom is also noted as the first location based role playing game, taking early advantage of smartphone GPS technology. In September of 2010, Beck led PerBlue through its first round of funding totaling $800,000 from angel investors and has grown the company to 35 employees. 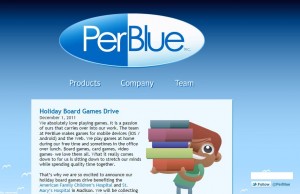 MO: How much experience in role playing games did you have before you started PerBlue?

Justin: Surprisingly we did not have a whole lot of RPG experience before PerBlue. During college we played Warcraft, Mass Effect and Dungeons & Dragons — but that was the extent of our experience. PerBlue Co-Founder and CTO, Andrew Hanson has a real affinity for board games, he loves to design and play games. That’s really how Parallel Kingdom originated. With limited experience actually playing RPGs, we had to learn as we went along the development process. We are still discovering what does and doesn’t work in the RPG genre.

MO: You have more than 800,000 players word wide and 35 employees. Did you envision the company growing this quickly? Do you anticipate that it will keep growing at such a rapid rate or plateau out eventually?

Justin: We always had the dream that the company would grow very quickly, but we always had the practical expectation, ‘maybe this won’t work out’ in the back of our minds. We are pleasantly surprised at our ability to continually grow. Today we have 35 full time employees focused solely on making Parallel Kingdom the best location-based RPG for mobile (Android and iOS) and the Web.

One of the key challenges we face at PerBlue is strategy, learning to focus on continual growth and avoiding a plateau. In the games industry, death is a common and natural occurrence. By continually growing, PerBlue is an innovator in the industry and I don’t foresee a plateau in the near future. With the growing success of Parallel Kingdom, we hope to branch out and begin development on new games, with dedicated teams for each.

Justin: We are so lucky to have such dedicated players, and their loyalty overflows to our social media channels. More recently we are tapping into our playerbase on Facebook and Twitter. We’ve found that players love to voice their opinions, be it good or bad, over these mediums. Engagement with players gives us a good read of their feelings towards the latest updates, new virtual items and game mechanics. Although sometimes very harsh, this feedback helps us understand the game’s pain points and what can be improved for better player retention.

MO: What’s been the most exciting thing about seeing so many people worldwide embrace your vision?

Justin: Location based gaming is a fascinating new field that is growing at an astonishing rate. From the player perspective, it is amazing to see how people all over the world relate and bond to each other based on their location. I love hearing stories of players who are so devoted to something we made. Occasionally they are mad when we change things within the game, but their feedback helps keep us on track and improving the game. Overall though, our players are so passionate about Parallel Kingdom and it’s a great feeling knowing that we built it.

MO: You’re passionate about entrepreneurialism and keen to share your experience to help others. For people hoping to enter the gaming industry what is your advice to them?

Justin: A large chunk of my career has been spent standing on the shoulders of giants, great entrepreneurs who were willing to take the time to teach me. Spreading the entrepreneurial spirit is one of my personal passions, I love that ‘aha!’ moment when others realize that they have something to offer the world as an entrepreneur too.

The gaming industry is a much better macro than I ever imagined, it is without a doubt one of the most fun and engaging places to be. The biggest piece of advice I have for those looking to join the gaming industry, is finding a strategic niche. There is so much space to innovate, and it’s ok to focus in on a niche that you can kick ass at. Be creative with how you enter the industry, and stay disciplined with your feature strategy. Remaining laser focused is a lesson I have learned again and again at PerBlue.