“If you have trouble taking direction and want to express ultimate creative freedom, working within the confines of a corporation may not be best for you. Granted, new challenges will emerge, but I am so grateful every day that I have had the freedom to pave my own way.”

Kristen founded Ruby Media Group with the goal of opening the vast potential of Social Media on the web to companies wishing to build relationships, grow and profit from Web 2.0. Kristen creates social media strategies, writes compelling content for clients, and is responsible for all content promotion. She is at the epicenter of the social media marketing world and frequently speaks to businesses and associations on new media. Ruby was honored by Columbia University’s Business School to lead a social media workshop for its alumni organization and was chosen to speak on personal brand authenticity at Microsoft. Kris is also a columnist for Westchester Magazine and was chosen by the Business Council of Westchester as the youngest “40 Under 40″ Rising Stars for 2010. 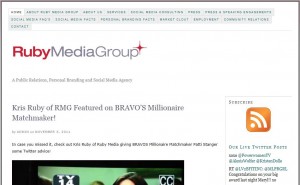 MO: What motivated you start your own company instead of working for an established agency?

Kris: I was motivated to start my own company when I realized I had an entrepreneurial instinct while working at a company straight out of school. I wanted to be my own boss, and have creative freedom on campaigns. What motivated me was when I realized how helpful my efforts at social media were for building an international following for the company I was currently with, I realized I could help other small business owners do the same. I wanted to build a following for them as well, and help baby boomers get a grip of the new media.

MO: What makes you so passionate about social media?

Kris: I am passionate about the cross over between social media and PR. I think both are critical for any outbound marketing, and social media is only 1 part of the marketing mix. Content creation is crucial for building a following, and utilizing social media and PR outreach to promote the content once it has been created is also critical. I am passionate because it is a skill that really benefits companies, and yet so many CEO’s don’t have time to do it themselves, but know they need someone to do it for them.

MO: How are you going to launch your new services into television and broadcast market? How will that impact RMG?

Kris: I currently do a lot of broadcast work and segments on social media. My goal is to help the public at large understand how to utilize these new tools to grow their business, specifically targeting the small business owner. It will impact RMG because it will expand our client base to a more national network. Providing my social media expertise on shows like Bravo’s Millionaire Matchmaker or ABC Good Morning CT is definitely the beginning of RMG’s integration into the television and broadcast market. I am also co-producing a show. This will result in increased brand recognition, and expansion into a national market.

MO: What sort of trends are you seeing in social media? What do you think the next big thing will be?

Kris: Geo locating is a huge trend right now in social media. I think the next big thing will be QR codes and social media integration. They are popping up everywhere, and clients want to know how they can utilize social media to integrate them into their marketing.

MO: What did it feel like to be featured on BRAVO’s Millionaire Matchmaker advising celebrity Patti Stanger on how to build her Twitter profile? Did she take your advice?

Kris: It was a wonderful opportunity to be featured on BRAVO’s Millionaire Matchmaker advising Patti on building her Twitter profile. I had written about Patti over a year or so ago as one of the Best Branded Women on Twitter. She was so thrilled that she reached out for additional social media and Twitter tips from me! I flew out to LA for the filming, and she has taken all of the advice I gave her and was very grateful and appreciative! Her Twitter following has continued to expand. Ruby Media Group gives Stanger social media tips and she gives us dating tips! :-)