“With national broadcast platforms including Direct TV, Comcast VOD, Omniverse, Time Warner, OnBoard TV and a whole lot more, Next One Interactive Inc. has laid the plans to launch a US childrens television block in 2012.”

A few weeks after the 10 year anniversary of the tragedy of 9/11 we are interviewing a woman who saw a way to make a difference in the lives of those who lost loved ones. Laura Wellington CEO of The Giddy Gander Company, owns a multi-award winning children’s television show and brand called The Wumblers. The company was launched in the aftermath of 911 as well as the death of Laura’s husband from cancer after a three year battle, leaving Laura with 4 small children to raise and no income. Instead of crying in her soup, Laura decided to be selfless and give back to children and families that were experiencing similar devastation from the loss of loved ones in 911.

The mantra “making the world a better place to live for all children” became the catalyst and Wumbler slogan. Partnerships are vast and wide for the brand in the US, including Sorpresa TV (Spanish language educational television), National Center for Youth Issues (who handles distribution into public schools around the country), Health Media Network (distribution in hospitals and medical centers pediatric and maternity wards), the National Watermelon Association of the US (who uses the brand to teach nutrition to kids across the country being that Wumbler babies are born from watermelon), etc. The Wumblers newest partnership with Next One Interactive Inc. has given the company the opportunity to build and launch its own nationally distributed, English speaking children’s television block with the cornerstone series being The Wumblers. 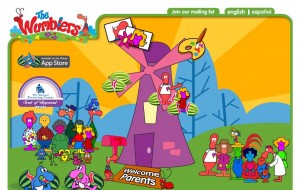 MO: How do The Wumblers help “make the world a better place to live for all children?”

Laura: Children are faced with an ever growing set of challenges in today’s world. Subjected to the realities of current day, providing a safe environment that gently guides and educates children to meet those challenges in the most positive, responsible, and beneficial ways for themselves and the global community is the basis for everything Wumbler. We don’t view The Wumblers as a television series per say as much as we view it as an encompassing learning program concerned with every aspect of children’s welfare. We strive to create “Human Beings” beyond just mentoring “good kids.” That “human” element is the key to a more peaceful future for all. Children connect to The Wumblers because they identify with the core of which it was developed, “the heart and hopes” of a MOM! It is the same reason MOMS (and Mr. Moms so to speak) truly identify and love The Wumblers too. It is the reason The Wumblers social learning program has become so successful amongst educators throughout our public and private school system. The same reason you will find the dvd series playing in maternity and pediatric waiting rooms in hospitals across the nation and why the National Watermelon Association of the United States uses The Wumblers babies (born from watermelon) to teach nutrition to children across the country. And in a day when Type II Diabetes is running ramped amongst some of the fastest growing cultural populations in the United States, integrating more watermelon in children’s diets is a good thing.

MO: I love the term “role mommy.” How have you gained this title, and what does this mean to you?

Laura: As a mom, myself, having turned potentially catastrophic personal circumstances into a successful means in which to help other moms (and parents) raise their children seems to have impacted and inspired a whole lotta people. The interest around my personal life just continued to grow as my professional life did. The fact that I was able to manage steering such a large ship all at once, which included running two other companies, launching The Wumblers, re-establishing my family life minus my late husband, and parenting my own children in a manner which led them to assume positive, grounded, intelligent, happy roads of their own despite their own individual, yet joint, loss, seems to have granted me the privilege of being being titled a “role mommy.” What this means to me is simply that I epitomize the face of countless moms who do everything they can for their families and their communities. To me, we are all extraordinary! I just get the privilege of being the face of many.

MO: It’s wonderful how many partnerships you have made through The Giddy Gander Company. What lessons have you learned in creating all of these partnerships?

Laura: I’ve been reminded why I love people so much as I have met so many incredible people with amazing ideas, thoughts, experiences, and insights who have helped me every step of the way, I can’t begin to count them all. It just goes to show you that doing what I do through The Wumblers is so well worth it as amazing children, with the right fertilizer, can grow up to be amazing adults who help make the world a better place to live for others.

MO: Can you expand on your newest partnership with Next One Interactive Inc. and what this means for The Wumblers?

Laura: Yes, Next One Interactive Inc. (www.nxoi.com) is one of the most innovative, convergent media companies available to viewers today when seeking Real Estate, Travel, Leisure and soon to be “Children’s” television content today. So impressed was I with their CEO, Bill Kerby, as a father of five himself who understands the economic challenges faced by families at the same time he understands the time constraints parents are coping with, when Bill began discussing with me the need for R&R TV and rrtv.com to launch a children’s television block to suit the wants and needs of today’s parents beginning with the HEART of a MOM, I couldn’t help but agree. With national broadcast platforms including Direct TV, Comcast VOD, Omniverse, Time Warner, OnBoard TV and a whole lot more, Next One Interactive Inc. has laid the plans to launch a US childrens television block in 2012. What was not expected by Bill or myself is the significant names of well known and highly respected companies who are endeavoring to partner with us on this children’s block. That said, our launch will be even larger than originally planned. The Wumblers will become a cornerstone series for this block. So children and families will be doing lots of Wumbling in days to come.

MO: When looking for other programming for the English speaking children’s television block, what do you look for in the programs?

Laura: HEART! Upbeat, educational content that makes my 2 year old son, Austen, get up and dance (because if he dances, so will other kids). I want shows that allow parents to walk away from their children who are sitting in front of the television without a worry as they leave the room. The fact is little kids watch television despite the studies. Moms need to know that when they leave the room, the shows being watched don’t violate the minds of their kids in their absence. Moms need to trust TV that means they need to trust me in making good choices. I’m always looking for contents created by moms too so if any moms would like to reach out to me with a series idea or something to show, contact me at wellingtonlaura@yahoo.com. Don’t send me the idea or show, just let me know you want to submit something and I will send you the proper form to do so. Certainly arts and film students are welcome to do the same.

MO: Congrats on expanding out internationally! How do you market your company and The Wumblers all over the world?

Laura: Thank you. I must say that I have been quite lucky with the partnerships I have established throughout all of the relevant industries to children’s television that the growth of The Wumblers continues to be fast and furious. The media has also been wonderful to me and The Wumblers. And of course, MOMs of all sorts (including Mommy Bloggers) have helped tremendously, well beyond what I could have ever assumed would happen. I am grateful to everyone who has lent a hand because there is real truth in the old saying that “It takes a community to raise a child!” Presently, that meaning has expanded out to a “global community” to raise a child and do it right, in my opinion but it is obvious from The Wumblers success that many people agree.