“When I saw all of my desktop software load from across town, all the CLOUDS went off. Of course it was called a MAN at the time, and then later called ASP, later still SaaS and now Cloud Computing.”

CRN Magazine selected Quipu’s tool incQubator as one of the “Top 25 Hot New Products To See Interop”. Michael Issa is the founder and CEO of Quipu applications and is excited to take the company even further. 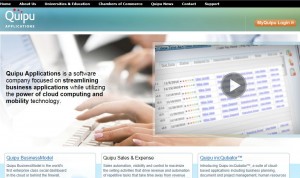 MO: Can you tell us more about your personal background and how it led you to creating Quipu applications?

Michael: In 1990 as an undergraduate at Drexel University, I assisted to create the first metro area network in Philadelphia for Wells Fargo bank, then Corestates, using CrossComm routers and Novell servers. When I saw all of my desktop software load from across town, all the CLOUDS went off. Of course it was called a MAN at the time, and then later called ASP, later still SaaS and now Cloud Computing.

The remote delivery of applications as a service to multiple end users has long enabled a high quality of service at a lower total cost of delivery and the maturation of broadband networks has enabled the ubiquity of access to these applications.

Later in Grad School I wrote the algorithms that were the foundation of the Growth models within BusinessPlan, you can see this here at www.kwipoo.com. This was the genesis of Quipu, and this technology is still deep inside both Quipu BusinessPlan and Qforce™.

MO: You have the Quipu BusinessPlan, Quipu Sales & Expense and Quipu incQubator featured on your site. Can you explain what purpose each of these serves?

Michael: Quipu BusinessPlan is the world’s first business plan application in the cloud. It exceeds all features of the traditional business plan space , and adds socialization, collaboration, and management among the business stakeholders. This is a $140mm market that we think we can shrink.

Quipu Sales & Expense will be available for first customer ship next month and is called Qforce™. Qforce is Quipu’s Salesforce.com dashboard that enables the correlation of sales and expense data for organizations using SalesForce.com CRM or Service and Concur Expense. Dashboard Plug-in Modules permit the profitability analysis of sales teams to the individual, team, or organization level.

incQubator is Quipu’s appliance service for placing applications behind the enterprise firewall. While still a managed service offering, incQubator, gives Quipu customers flexibility in distribution, it offers the customer the physical or virtual appliance that can reside on their premise or in their data center cages.

MO: In simple terms, what real world problem does your software solve?

Michael:  BusinessPlan is for entrepreneurs and their educators. It provides a community of entrepreneurs with a set of tools to create, share, and manage their startup. Investors like it too, because it gives them access to early deals.

Qforce drives down cost of sales, and shortens sale cycles for Salesforce,com users.

incQubator – is distribution of our applications as our customer requires.

MO: Where does the name Quipu come from?

Michael: A Quipu is a recording device used by the ancient Inca Empire. It was a tool used to measure the social and financial status within the Inca community. That’s what we do.

MO: There are so many tools and software programs on the market that claim to save entrepreneurs time. What advice can you give for sifting through to find the ones that are actually valuable?

That is the problem isn’t it? Indeed an entrepreneur could spend pretty much forever following all the links that claim to save them time.

My advice to the entrepreneur would be to use the tools provided by the Professor if they are in a Formal Entrepreneurial Program. Indeed Quipu is focused on the educators, and similar programmatic communities of startups.

If you’re not in a program, my advice is to use Quipu BusinessPlan and use one of the educator programs within our system.

MO: What can we expect from Quipu in the near future?

I already told you about Qforce – and that is a home run!

But I will tell you that we are also working on iPhone and Droid versions of our applications as an extension and aggregation point for the Dashboard and BusinessPlan. It should be a good Christmas!