Michael Kaiser-Nyman worked on political campaigns before starting Impact Dialing. He’s spent more time than he cares to think about calling to fundraise, persuade, and get out the vote. After wasting far too much time trying to train volunteers and staff to use other dialers, and spending far too much money paying for them, he started Impact Dialing to save others the time and money he couldn’t. 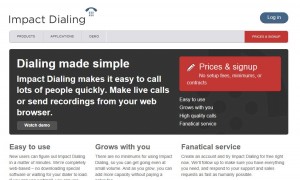 MO: How long did it take from the inception of your idea to getting it commercialized?

Michael: A long time! In the summer of 2009, I was put in charge of shopping for a dialer for the campaign I was working on. The more I learned about all of the products available, the more I wondered why nobody had built a scalable system using cloud computing and voice over IP, and why nobody had designed a good user interface for a dialer. I originally had no intention of starting a business and tried to find other people to take my idea, but when I didn’t get any takers, I decided I had to do it myself. I had no idea what I was doing and there were a lot of hiccups and false starts along the way; it wasn’t until August of 2010 before we started writing the code for Impact Dialing.

MO: How are you anticipating the 2012 elections to affect Impact Dialing?

Michael: Most of our work to date has been in the political market, and most of the political work happens in presidential years – of which 2012 is one. We will be helping volunteers and staff on political campaigns across the country churn out an enormous number of calls.

MO: With no funding, Impact Dialing launched its first version in 2010, taking less than 5 weeks from the first line of code to the first customer. How did you manage to build the business so quickly and with no funding to start with?

Michael: I paid for the first version of Impact Dialing out of my own bank account, which wasn’t terribly well-stocked. That meant we had no choice but to get customers on as quickly as possible. We whittled down our feature set for the first release to what’s often called a “minimum viable product” – the smallest number of features necessary to get customers on board. After we released our first version, we continued building features that would help us land new business. This approach got the customers and cash coming in the door as quickly as possible.

MO: How hard was it to build a tech business with no funding and no entrepreneurial experience and without a tech background? Did you ever want to quit?

Michael: I’ve never wanted to quit, but I’ve often felt like I’m flying blind and wished that I better knew what I was doing. I’ve had to be willing to acknowledge the huge number of mistakes I’ve made along the way and learn from them quickly. Since I was little, I’ve followed computers and technology, so I knew the basics of what we were doing, but I’ve had to spend a huge amount of time reading and learning and asking questions. It’s been similar with the business side of things, just teaching myself as I go along and getting really good advice from others.

MO: Congratulations on winning the Lean Startup Challenge run by AppSumo. How did it feel to be recognized and awarded in a previously unfamiliar industry and also gain some angel funding in the process?

Michael: Winning the Lean Startup Challenge was one of the best things that’s happened to Impact Dialing. The investment was crucial to scaling the company up, but the angels and mentors I got from the funding have been even more important in helping me figure out both the technology and business.

MO: If you had to start over again, is there anything that you would do differently?

Michael: If I were starting again, there are a million things I’d do differently, but the most important one is to get advisors. There are so many things you can only know from having run a business before, but if you have good advisors, they can help you make the right decisions when you don’t know which way to turn. So many of the little things I would do differently, a good advisor could have helped me see before I made the mistake.