“We learned it’s better to be the best at one thing, then to be mediocre at 100 things.”

Do you own your Google results? BrandYourself makes it easy for you. It simplifies the Search Optimization process so anyone can get their best content to the top of search engines so they can bury negative results, raise positive results (or create new ones!) and track all the search results for their name.

BrandYourself launched and quickly gained traction, getting over 20K users in a short amount of time. They are launching a V2 of the system in late 2011 and we are excited to see the newest version! 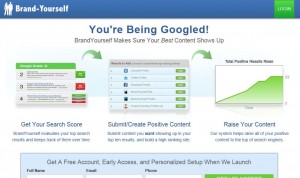 MO: You say it is a simple process to own your Google results. Can you explain this process to us?

Patrick: There are billions of pieces of content out on the web, so when someone makes a query for your name, search engines go out and look for content relevant to that term. Many times, when people publish content about themselves it does not show up high in search results, simply because search engines have trouble finding it or figuring out what it’s about. There are simple things you can do to your content that will:

i. Make sure it is quickly found by search engines

ii. Structured so search engines can quickly tell it’s about you

To give a simple example, let’s say your name is nowhere to be found on your site. How would search engines know to rank it for your name?

MO: You mentioned that there were some common themes of confusion in your software that you took the time to improve on and relaunch a simplified more powerful version. What were some areas of confusion/how did you create a more simplified version?

Patrick: When we first launched we were too ambitious with our feature set. We interpreted our mission—to help people put their best foot forward on the web—too broadly and decided, in addition to helping people with their search results, we should help them do everything: get more twitter followers, connect with more people on linkedin, build social profiles, etc. The problem was, we had so many different features and value propositions, even though we were growing, it was obvious we were diluting our most powerful value propositions. Having so many features also made it difficult to focus on improving your most important features. We learned it’s better to be the best at one thing, then to be mediocre at 100 things.

We were paying close attention to our users (I would spend 5 hrs a week calling random users to learn what they really thought of the product), and decided that the one thing we did better than anyone else, that our best users were most passionate about, was helping them show up higher in Google. We decided to rebuild the product around that, focusing all of our features on helping people in Google, and making sure they were as powerful, simple and clear as possible

MO: There is a very interesting story behind the founder Pete Kistler. Can you tell our readers about why he thought it was important to create this software?

Patrick: While in college, our co-founder and head of product Pete Kistler could not get an internship, despite being a model student and hard worker. He finally figured out why, when an employer asked him to explain something on the web. He was being mistaken online for another Pete Kistler, an ex-convict from the same area around the same age

Patrick: Pete was devastated. Where were all his awards? His great GPA and recommendations? His Achievements? He worked hard his whole life only to be misrepresented by a convict in the moment of truth?

Pete realized then and there that Google was his first impression and it was his responsibility to make sure he was as accurately represented as possible. He also realized this was a common problem. Most people are not accurately represented, but they are essentially helpless. If you want to improve your search rankings, you either need to be a tech whiz or pay a company thousands of dollars a year to do it for you. So unless you had a couple G’s to burn or a happen to be a politician with a campaign budget, you were out of luck. Together we decided to change that.

That’s where our mission came from: give everyone the opportunity to get accurate, positive content in their top search results so people can find the real them. We believe you shouldn’t have to spend thousands of dollars or be a tech whiz to make sure you have positive, relevant content representing you, rather than negative, irrelevant or content about other people.

MO: What is your promise to your customers?

• We will always make sure our technology is up to date and we continue to be the very best and easiest way to get your content to the top. If you use our service your content will be as search engine friendly as possible.

• We will never employ “BlackHat” techniques that manipulate/trick search engines and ultimately get your content banned from results.

• Sign up for a free account today and if you can’t figure out how it works, contact us directly and someone will reach out and show you how it works and get you on the path to controlling your reputation.

MO: What do you think is the biggest misconception people have about the importance of their Google results?

Patrick: I think a lot of people think as long as they don’t have negative content showing up, they have nothing to worry about. The truth is, while negative content is certainly damaging, it’s just as important to have positive content showing up, so you make a good first impression. Imagine this: An employer has three resumes in front of him, and googles them all. The first guy has negative content, and immediately gets taken off the list. The second guy doesn’t really have any content. The employer doesn’t learn anything about the person one way or another. When he googles the third guy, he finds blog posts about the industry, he finds all of the guys experience, his recommendations, his past work, even his personal interests. Who’s most likely to get that interview?

MO: Can you tell us about any success stories from your clients?

Patrick: One of our first customer is a great case study. He was applying to law school, but his very first result happened to be an anonymous posting on a college gossip forum about his relationship with an ex-girlfriend. That was the only thing you could find about this person. He had worked hard to be a great student, a strong community member, and the only thing recruiters would find in Google was a posting about his failed relationship in college.

Within two weeks of using us, he was able to push that off the first page and replace it with information about his community work, education, papers, and other content like his LinkedIn profile and personal website. If a recruiter wanders onto the second page (93% won’t) they might find that anonymous posting, but at least it’s not the only thing representing him!