“…at the end of the day, what carries you through is really the passion for what you’re doing and your ability to inspire that passion in other people.”

Derycz Scientific is a content-repurposing company based in Santa Monica, CA that, through its Subsidiaries, develops enterprise content management (ECM), workflow, and
compliance solutions for Fortune 500 companies, primarily in the life sciences.

Derycz’s business stemmed from a work-study position as a library gopher for professors. While gathering both non-scientific and science-related research for his professors, he saw the value in the fact that everyone, everywhere, was looking for an answer to something. 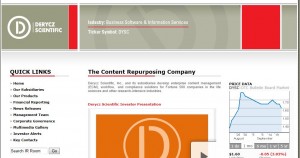 MO: Derycz Scientific is a content-repurposing company.  What exactly does that mean?

Peter: Basically, what it means is finding new uses for previously published content than maybe the original intended use. So, for example, scientific publishing, and typically, scientific journals are published because they’re used to fill issues that are eventually sent to subscribers whether electronically or in print. People subscribe to journals, scientific journals. They get their monthly issue or their quarterly issue. They find out what’s been published and so on. So typically, publishers are publishing to a deadline where they’re publishing on a quarterly basis or a monthly basis and so on, and they generate subscription revenue from that. Another revenue that they generate from that, which is sort of a traditional revenue, the advertising. So if you take the subscription revenue, what we’re doing is we’re proposing that a third or a fourth category out there, which is, “Hey, you’ve published this material in the past. Other people are finding it useful bits by bits, primarily article by article. So there may be somebody who wants to read an article you published a year ago that wasn’t a subscriber then and not a subscriber. So that’s what we do is we provide sort of an ancillary revenue stream.

MO: How did you get your start in this business?

Peter: I’m sort of an entrepreneur historically in the region of scientific literature, and I built up another company in the past in 2003. But basically, I got started by doing library research.

People that wanted to do research but didn’t want to go into the library and spend all that time digging up information would call me. “Hey, you go spend a bunch of time in the library and figure out what I want.” So they would give me topics to research or articles to go get in the library and so on. So I used to just be a lot of people’s library slave, if you want to call it that, as a work/study student down at UCLA.

Eventually, I turned that into more of a regular business. When my work/study ended, I ended up posting ads around campus saying, “You need to know Peter.” So I ended up building up a customer base of people that needed answers to questions. Those were doctors or lawyers or anybody who was doing in-depth research would contact me. I did well at it. A lot of the repeat business was existing customers, so I’d get a second or third call from a customer saying, “Hey, I don’t have a question anymore, but those articles that you gave me as part of the answer to my first question, I read those articles and in the bibliography to those articles, there’s a bunch of other articles that I’d like to read.” The second and third call was always for more articles. So, eventually, I ended up dropping the question answering business and focusing strictly on article supply. People need an article, they want to get their hands on it, they want to read them, they want to get them to their friends or their colleagues or get them up to other people. So I started focusing purely on articles after that.

MO: Your own business has developed over the years into its current state. What are your thoughts on entrepreneurship as you look back?

Peter: When you’re a student entrepreneur, you start out as a student in college and you’re all excited. You have a lot of enthusiasm to start a business, and then you learn lessons, little shortcuts, and meet people and so on. I built that up in Australia and Germany, and I learned a lot and I met a lot of people on the way. You take all these life lessons about business, about entrepreneurship, you take relationships that you’ve developed over time, people you’ve gotten to trust, people have gotten to trust you, and you realize you have a whole different experience.

You have a whole new set of resources as an entrepreneur, which I’ve found very useful. So, that experience, building other business out of that, and you get to reuse it, which is pretty cool.

MO: Who are some of your clients?

Peter: We have a lot of customers that are based on scientific knowledge, so we have a lot of life science companies, farm companies, biotech, we have some engineering firms. But any customer who has built their business on science is a good customer. So, examples of that would be 3M or Abbott Labs and companies like that.

MO: What advice do you have for other, less experienced entrepreneurs?

Peter: For what you’re doing, almost in any endeavor, is what really matters because you’ll have successes and failures along the way and lessons learned and celebration and things. But, at the end of the day, what carries you through is really the passion for what you’re doing and your ability to inspire that passion in other people. So, if you can get people, yourself primarily, but other people motivated and willing to embark on a journey together, that’s more than half the battle. The human energy that’s required to actually carry someone. You can have the best people in the world working for you or you can be the best person in the world, if you don’t have the passion, then you’re probably not going to get too far. Regardless, no matter how rich you were born or how poor you were born, it’s really about the passion. Solo entrepreneur or Steve Jobs, it doesn’t really matter. Passion about what you’re doing, that’s what’s ultimately going to drive the success of what you’re doing, even if your success is a lesson you’ve learned for tomorrow. That will drive your success tomorrow.

MO: Do you do any mentoring?

Peter: Not really, not anything on an official basis. But what I do is when customer or suppliers or friends, when I notice they’re sort of in an entrepreneurial situation and when I know they can benefit from the few words of advice, I always offer myself up. I say, “Look, if you want me to be your advisor for free, you want to have an advisory board or just a friend to call on, call me.

I’m available. I give free advice. I don’t want to charge you anything. I don’t want options or warrants. I’ve seen things that I think may be useful to you and you guys.” So nothing on a formal basis, but always when I run into people, I always want to help them or something. It’s sort of an innate thing that I just want to help.

The cool thing about the United States and some other countries is that entrepreneurship does comprise failures as well as successes. Usually, you don’t get punished for life here in the States on your failures. There are some countries that, if you fail in business, you’re blacklisted for the next 5 or 10 years. Here, you can fail a business and the next day pick yourself up and go try it again. If you’ve failed in the past, you’re more likely to succeed in the future.

France and some European countries, if you have a business bankruptcy, you’re in it for life.You’re out of business. You’d better go back to do something else, but don’t be an entrepreneur anymore. So hopefully we attract some of those over here.