“Because of our hard work we were the first people in the world to have actually have witnessed the capability to retrieve and display a number not already stored in our phone’s mobile contact list in real-time.”

Privus Mobile is a patented software product and service of I D You, LLC. Formed to launch the Privus brand, I D You, LLC is a wholly-owned subsidiary of Accudata Technologies. Based in Allen, Texas, Accudata is a leading telecommunications data company that serves telecom carriers, telemarketers, e-retailers and others with data validation, authorization and storage services. In the course of this work, Accudata developed much of the technology that today powers I D You and its Privus service. I D You maintains its operations in the same facility, alongside those of Accudata Technologies. 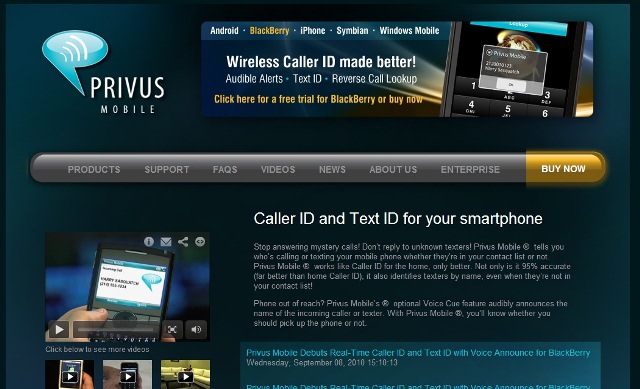 MO: Can you talk a bit about the process of taking Accudata Technologies’ B2B services and transforming it into a B2C service called Privus Mobile?

Greg: Originally founded in 1989, Accudata Technologies provides flexible access to telephone number data retrieval and validation through innovative technology and cutting-edge data transmission. For a long time, lead validation was strictly a B2B venture for us. In fact, we became quite competent in our ability to research databases relative to telephone number information. For example, when your phone rings and you’re provided the caller’s information, it’s a result of looking up the phone number in a databases. Accudata provides these databases. So, when we looked at B2C opportunities for Accudata we focused on where our expertise, knowledge and capabilities were; and we decided to expand into the mobile space and provide caller ID for cell phones. When we embarked on that path we realized that it would be difficult to aggregate this on a B2B basis because the carriers that provide ID services have had years of experience in caller ID and have never embraced the idea of offering it on mobile phones. Therefore, we made a move and created a wholly owned subsidiary, called I D You, LLC, which focused on B2C. I D You is a customer of Accudata, so I D You buys the caller ID information in order to provide the B2C clients with the calling name, thus providing the mobile caller ID service we offer through our Privus Mobile applications..

MO: What were some of the challenges you faced during the initial transition process?

Greg: We view it as more of an addition because we continued our B2B business and simply added the B2C capabilities. However, one of the primary challenges we had was figuring out how we could market our new B2C product, because we only had experience marketing B2B. In order to do this successfully we formed several unique partnerships; the first one was with our marketing agency, M/C/C. We worked closely with M/C/C to create a creative campaign to launch the product. Second, we partnered with a then Dallas-based company called Handango (now Appia) to develop our B2C idea into an app. Handango was selected because of their success in the mobile application market. They helped us figure out how many operating systems were we going to make our app available on and provided some “free” marketing of our app. This was an especially interesting process because at the time it wasn’t clear who the winner in the mobile operating system space was going to be. Android wasn’t even announced at that point! In the end, we all worked together to decide how much time, money and effort we were going to spend developing our app on these different operating systems. However, between our relationship with M/C/C and Handango we were able to create a great product and market it with some creative television ads and a unique website.

MO: What are some trends in the mobile space that you’re excited about?

Greg: There are a couple of trends in the mobile space that are very exciting. The first trend is that there is a nice consolidation in mobile operating systems. We still hear about Microsoft trying to make a niche, but I think the jury’s out; and it’s clear that Android and Apple’s iOS are the leaders in the mobile operating space. The second trend we see is exciting in two aspects. The first is the huge growth of the smartphone market. This growth is happening because the price point of smartphones is coming down, so more consumers can afford them. The other, is the popularity of apps. It is phenomenal how many consumers download and use apps on their smartphone. In 2005, nobody knew what an app was. Now, everybody’s downloading apps, and we don’t see it slowing down.

MO: Can you talk about the process of developing the world’s first true caller ID service for smartphones?

Greg: As I mentioned earlier, we’re constantly looking at other things we can do with our core capabilities. I am very staunch in my belief that one should stick to their knitting. Accudata’s not going to invest in gas stations or manufacture car tires, because there are certain things we know we’re good at—that includes utilizing data that surrounds telephone numbers in the telecom space. So, we took this idea and applied it to a concept for a caller ID mobile app we named Privus Mobile. The app seemed so close to our core competencies that we simply needed to learn how to work in the mobile space. We decided to tackle this issue by first pursuing a carrier to work with. However, our co-founder and current CTO, Monica Martino decided to take a stab at writing code for a mobile app utilizing the Symbian operating system. A few months into development, she came into my office and told me to call her cell phone. Upon the first ring my name popped up on her phone’s home screen! It was so exciting because we realized it was finally possible to have mobile caller ID services without any involvement from a carrier or a brand name player. Because of our hard work we were the first people in the world to have actually have witnessed the capability to retrieve and display a number not already stored in our phone’s mobile contact list in real-time.

MO: What influenced your decision to enter the Vietnamese marketplace and how has that expansion influenced the direction of the company so far?

Greg: It’s interesting because the company we’re working with in Vietnam actually contacted us. They said they had done research in the caller ID marketplace and it appeared Privus Mobile was the only one that could provide accurate mobile caller ID capabilities for their customers. We then worked to have our application written in Vietnamese. Although, we have had all the international translations completed for quite some time, the app is not yet fully deployed. So, while we know how to do it, it takes a little bit of education and some extra time in order to deploy this on an international basis. Part of the benefit we have in the U.S., is that we’ve had caller ID on landlines for a long time. It’s an idea we’re very familiar with. However, in many foreign countries they’ve never had caller ID or a robust landline infrastructure, so it’s an education process for them. One way we’re working with Vietnam is by releasing a free mobile caller ID app, utilizing ad capability. We expect to have it released in the next two to three weeks. As far as future expansion goes, we think the world is a great opportunity, but, as always we’re looking for the right fit.

MO: Can you expand on why you decided to reach beyond your award-winning work in caller ID and into the gaming world. Are there going to be more games in the future of Privus Mobile?

Greg: Expanding into the gaming world was a little bit like our initial test for mobile caller ID. We were having a brainstorm meeting and while ideas were flowing, we were checking to make sure we didn’t stray too far from our expertise. It’s then that we decided to venture into mobile gaming. As we watched the mobile gaming market expand and saw the mobile ad space increase, we decided to create a free, lighthearted game called Swine Flew. The game is supported by Privus Mobile and other ads so users can play it for free. In many ways, Swine Flew has helped us share Privus Mobile’s caller ID application with more people.

As far as more games in the future go, we have some expansions and modifications we’re making to the current version of Swine Flew. We’re talking about some things like Swine Flew in Space or Swine Flew Undersea. There are many things we can do without starting from scratch.