“…and in doing so gave birth to the online Virtual Currency Monetization space which is now a $4 Billion dollar per year market (globally).”

CPAlead is an online marketing company that specializes in digital content monetization. They created the CPAlead Widget, which delivers advertiser-sponsored content such as surveys, quizzes, games or purchase offers that can be completed by a consumer in exchange for premium content as opposed to traditional payment methods. On a lead to lead basis, the CPAlead platform generates exponentially greater revenues for publishers than industry leading cost per click, pay per click or cost per mille models.

The concept for CPAlead was initially conceived in 2006 as a solution for online video gamers with limited financial resources. The solution, at the time, allowed gamers to have advertisers pay for in-game rewards in exchange for the player’s interaction with advertisements. With this solution, they created the online virtual currency space.  Streets-of-LA.com, the first online game to implement this technology, experienced a substantial revenue increase when the number of players utilizing our technology quickly and dramatically grew.

Today, CPAlead is taking steps towards to delivering the first fully comprehensive platform geared towards allowing website owners of any kind to monetize their digital content like never before. 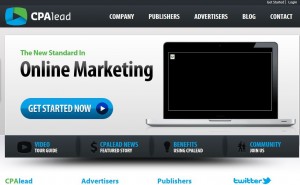 MO: CPAlead is truly an innovative idea. Can you tell us about the initial concept and what the first steps were in making it a reality?

Robert: As you mention, the initial idea was developed in 2006 for video gamers. We know we had a strong model, and having experienced such success with  Streets-of-LA.com, my fellow CPAlead co-founder and then Streets-of-LA.com owner, Troy Krzyston, and I decided to commission this technology to third-party online games, such as Outwar.com. We created the first CPA network that specifically allowed online games to build their in-game currency directly with advertisements and in doing so gave birth to the online Virtual Currency Monetization space which is now a $4 Billion dollar per year market (globally).

With this success, we continued on and introduced the concept to Second Life, one of the largest online economies in a virtual world. For each time a player interacted with an ad, the advertising company paid out a specific amount of real revenue. CPAlead kept a portion of these funds and the player received a specific amount of virtual currency to purchase in-game content.

Having built a strong groundwork in the virtual currency space, we decided to expand into the market with an offering that could be used on a much larger scale. In 2008, we released our current solution, the CPAlead Widget.

MO: Walk us through the user experience on the side of the businesses implementing this type of monetization?

Robert: It’s really quite simple. A publisher can visit our website and sign up for an account. Once they have an account, they can take advantage of our user-friendly dashboard to create their own widget – the offering that the consumer will see – with a customized look and feel. The next step is selecting the type of content that they are providing, for example, music.

They will also find helpful details and suggestions that will help them maximize the value they receive from using our platform. The publisher simply follows a guided tour from tab to tab that provides them with options to customize the widget.

After that, the publisher is set up and ready to earn money! The system will provide them with a code and simple instructions that will allow them to place the widget on their website. If they want to adjust or edit their widget, they simply log into the dashboard and make the desired changes.

MO: Walk us through the user experience on the side of the consumers taking the surveys for in-game rewards.

Robert: We’ve all browsed a website and clicked on a certain area of that site when a paywall or subscription pops up. Many of us, when forced to pay in order to access content, will simply abandon the site. Clearly, users don’t abandon at this point because they’ve lost interest in the content they wish to access but rather, refuse the method of payment that is being imposed upon them. When the CPAlead Widget pops up, a consumer takes a brief survey, quiz or game before the content is unlocked. That’s it. It is truly that simple, and a consumer is able to view the content without being forced to make any payments. In fact, we have found that the process of taking a survey or completing the majority of CPA offers takes less time than entering payment information – so the user saves time and money

MO: You initially created CPAlead as a solution for online video gamers with limited financial resources, who is the ideal target market now?

Robert: The great thing about our solution is that it can be a useful, powerful tool for just about any publisher seeking to generate revenue from their premium content. Whether it’s an upstart membership based website or an up-and-coming musician putting new songs on a website, we can help them monetize their content and improve their overall user experience in creating an environment where users are not forced to pay. We are a great solution for larger publishers too, and our goal is to continue expanding into the mainstream audience.

MO: How do you plan to innovate and expand on the initial concept for CPAlead

Robert: We have a solid team that works to understand just what publishers need and want in order to be successful. Because of that, we are constantly developing and providing new tools to assist them in monetizing their content. Initially, our focus was to help monetize premium content with the CPAlead Widget. However, we recognize that the vast majority of content online is not considered premium and we wanted to find a way to help website owners monetize all other forms of content.

It has taken some time since we didn’t want to simply build a clone of another service as so many do with banner, contextual and other sorts of advertisements. As a result, we decided that we wouldn’t go forward with anything that couldn’t be as big a game changer for website publishers with non-premium content as the CPAlead Widget was for those with premium content. I’m both proud and excited to say that we are putting the finishing touches on our new tools and invite everyone to keep an eye out as we intend to have a full platform available in October!

In the end, we are one step closer to our ultimate goal of being the best, most comprehensive solution for digital content owners looking to monetize their traffic as well as advertisers looking for the best return on their investment dollars.

MO: As a socially-conscious company, you support Kiva, a global organization that connects people through lending to alleviate poverty. Can you tell us more about this organization and your involvement with it?

Robert: Kiva is a global organization that empowers people around the world with small loans. It leverages the internet and a network of microfinance institutions to allow individuals to lend as little as $25 to help create opportunity around the world.

We know how far the US dollar can go when it comes to helping third world countries; we have seen the results in some of our very own clients.

Our clients come from all over the world looking for non-traditional ways to earn money from their website.

Every week, we hear stories from our clients now having enough money to help ailing loved ones pay their hospital bills, to those who now help others in their community that they see struggling every day.

Thus far, we have accomplished the following: generated $25,900 in 1,034 loans Common Interest.