“If you’re not interfering with other people’s rights or breaking the law, you should be able to do as you please, even if others disagree with what you believe or how you express it.”

Ruth Carter is a 2011 law school graduate from Arizona State University. After 9 years in the mental health industry Ruth gave up being a therapist to pursue an education in law school. Thankfully, she discovered she sincerely enjoyed law school, and that she was remarkably good at it, particularly intellectual property and internet law. Working in the law gave her a chance to continue to be an advocate, have a more active role, and ultimately a more significant impact.

Carter’s post-law school plan is to open a solo law firm focused on intellectual property, internet law, First Amendment, and business formation. It will likely be a virtual law office aimed at serving content producers, entrepreneurs, businesses in need of website terms and conditions or social media polices, and students and schools who need assistance addressing bullying and cyberbullying. She’s also working on her first ebook – The Legal Side of Blogging that will hopefully be released in the spring of 2012. Her professional plans include being a public speaker on copyright, defamation, and internet law issues. 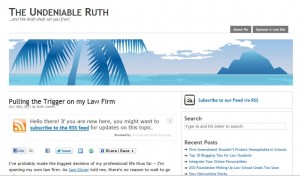 MO: Why are you choosing to start your own business rather than working for an established firm?

Ruth: During law school, I worked in six different internships, externships, and clinics, each in a different work environment. None of them were a good fit and the one that was the best fit was the one that allowed me to work the most autonomously. I’ve never fit the mold of the traditional law student, even when I tried. If I worked at a traditional law firm, I would be miserable. I am too bold, outspoken, and I have too many professional interests to comply with monotonous work and high billable hour requirements.

I spoke with many solo attorneys during law school. They told me that there is no reason not to go solo directly out of law school and that doing so provides a great deal of freedom to select the clients, cases, and lifestyle that I want. Having my own firm, particularly with a low overhead, can be financially successful in a short amount of time. It will also give me the ability to supplement my traditional legal work with writing and speaking engagements.

I want to develop a niche in providing legal services for geeks who need legal services to get their businesses off the ground or to protect their intellectual property. I think they might be more comfortable coming to a fellow geek like me instead of an intimidating law firm where they are not certain that their assigned attorney understands their them and their needs.

MO: Tell our readers about the Sponsor a Law Kid program that you founded in your final year of law school.

Ruth: Sponsor A Law Kid was a program I launched when my law school tuition went up over 30% between my first and last semesters of school. I offered anyone the opportunity to sponsor a day of my final semester of law school in exchange for me writing a blog post about them or the cause of their choice. Every day in 2011 between January 1st and July 27th (the last day of the Arizona Bar Exam) was available for sponsorship. I used the price structure initially used by Jason Sadler’s company, I Wear Your Shirt. January 1 cost $1 and each subsequent day cost $1 more (Jan. 2nd = $2, Jan. 3rd = $3, Feb. 1st = $32, etc.).

I think the program was a success. I sold 46 of the 208 days available for sale. It brought attention to the growing cost of legal education, and it paid for about 1/3 of my final semester’s tuition.

There were some people in the legal community who did not approve of what I was doing and were quite vocal about it on my blog. It upset me at first until I saw that my supporters responded with vigor, which I think resulted in more days being sold.

MO: How has the internet and social media changed the face and nature of bullying? What measures can an individual take to protect themselves against harassment?

Ruth: The internet and social media has made it possible for bullying to occur more anonymously. In the past, bullies often had to look their victims in the eye and seeing the pain they caused might have curtailed their actions. With the internet and cell phones, it’s possible to torture someone without ever revealing your identity or seeing your victim. It makes bullies a lot more vicious when they don’t see the consequences of their actions. The internet can also make bullying more widespread. Now, instead of bullying a victim in person where only a few people may witness it, a bully can create a website dedicated to torturing their victim where anyone with an internet connection can see it.

There are many things a person can do to protect themselves against harassment. First, they can change the settings on their social media profiles so that only people they know can contact them. Second, if they are being harassed, they should report it to the website that is hosting the harassing material to get it removed and to reprimand the bully. If harassment is occurring over email, they should report it to the email service where the message originated. Third, keep a record of all harassing emails and take screenshots of harassing material that is posted about you online. Finally, don’t be afraid to report the harassment to law enforcement, particularly if you feel that your physical safety is in danger. Many states have laws against cyberharassment and cyberstalking.

MO: You participated in your first flash mob in January 2009. How did that experience shape your interest in “prank law” and First Amendment work?

Ruth: At my first flash mob, I met the people with whom I started Improv AZ, a flash mob and prank troupe in the Phoenix area. Before every event, someone has to research the applicable Arizona laws to make sure that what we’re doing is legal. When I began studying criminal law, I learned that just planning an event with an illegal component could be enough to get the organizers charged with a crime, even if the flash mob or prank never occurs. I’ve since researched and written extensively about the legalities of various pranks, organizing events, and the rights of law enforcement and mall cops to question and stop us.

When it comes to the First Amendment, I support the idea that everyone is entitled to their opinion and the ability to express it appropriately. If you’re not interfering with other people’s rights or breaking the law, you should be able to do as you please, even if others disagree with what you believe or how you express it.

As a flash mobber, I know some of the things I do offend people, like participating in the annual No Pants Light Rail Ride. As long as what I do is legal and my critics express their distaste appropriately, we can agree to disagree without any additional conflict.

This year, the media has coined the terms “flash mob crime” and “flash rob” to describe criminal acts that are performed by large groups of people, such as mass shoplifting. These are not flash mobs! It’s incredibly frustrating to be associated with these criminals when we put so much time and effort into ensuring that our events are legal and safe.

MO: Are you ready to launch in 2012 or are you still getting the kinks out? What tools are you using to prepare yourself? What kind of marketing strategies are implementing to attract clients?

Ruth: There is much to be done before the official launch. I have to create a professional entity, buy bookkeeping software and a scanner, create my website, get malpractice insurance and decide which virtual law office service I want to do. Some of my plans are on hold until I get my certificate that says I’ve been admitted to the State Bar of Arizona because only attorneys can own law firms.

I am putting no money into marketing. All of my marketing will be through word-of-mouth, blogging, and social media. Every attorney I’ve spoken to says that there’s no need to spend money on marketing.

MO: Do you have any mentors that you use to bounce ideas off and gain an understanding of the kind of foundation you want to build?

Ruth: I have many mentors. I am fortunate to know so many people who are willing to take my call if I need a soundboard about a case or operating my firm. I also have a mentor on the business side who helping me decide what services to offer, which people I should network with, what entities I should join, and providing other guidance to help get my business off the ground.