“They are treating social media tools as though they were free electronic billboards – they aren’t.”

Scott Swanay, CEO of Sherpa Social Media believes that too many companies today are using social media incorrectly and he wants to help! 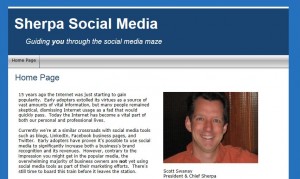 MO: You claim that too many companies are using social media incorrectly. What are they doing wrong?

Scott: They are treating social media tools as though they were free electronic billboards – they aren’t. The short-term goal for social media usage is to increase your online visibility by communicating directly with both current and potential customers/clients. If your audience sees you as a trustworthy resource for helpful information, then both your visibility and your sales will increase as a result.

MO: Of the three, Facebook, Twitter, and LinkedIn which do you think companies with no social media experience should delve into first?