“You could have the greatest vision and the greatest business plan in the world, but it’s just an idea until you execute it.”

Sean Bandawat is the president and driving visionary behind the turnaround of Jacob Bromwell. His revival of the company started during college when he developed a business plan that earned the “Top Undergraduate Business Plan” award from the USC Marshall School of Business.

He is the founder of RateMyFraternity.com, a venture-backed start-up that allows Internet users to find, rate, and write reviews about different fraternity chapters nationwide. He also co-founded College Zoom, an award-winning college counseling service that specializes in helping high school and community college students apply to America’s best universities.

MO:
Tell me about the revival of Jacob Bromwell.  I understand this started during college when you developed a business plan that earned the “Top Undergraduate Business Plan” award from the USC Marshall School of Business.

Sean:
That’s correct.  I developed the business plan with my business partner, Eric Stanton, who graduated from USC a year before me.  Eric and I worked on several businesses prior to Jacob Bromwell but were not fully satisfied with the results and potential of those businesses.

Rather than start a business from scratch, our goal became to acquire an existing company with net losses, identify inefficiencies, take over management, and streamline it to maximize its profitability as quickly as possible.  After years of searching for the right deal, we decided on Jacob Bromwell, Inc., which was established in 1819 and is the country’s 34th oldest continuously owned and operated company.

For the last decade, the company suffered major losses in customers and sales.  It took nearly six months of due diligence to truly understand why.  After analyzing the business from every angle, we actually discovered that the company’s decline had nothing to do with a decline in demand for its products.  There actually couldn’t be a better time than now to grow our distribution.

Immediately after I graduated, Eric and I have remained laser-focused on executing our business plan.   We’ve made numerous improvements to the company’s organizational structure, which include instituting new accounting and inventory software, outsourcing operations to third-party manufacturers, hiring a direct sales force, cutting inessential products, and repositioning the brand with Forty Agency, a nationally-recognized marketing agency.

We’ve already secured sales agreements with QVC and reputable catalogue companies such as The Vermont Country Store, and we’re now targeting specialty retailers nationwide.  With the economy being so uncertain, consumers now more than ever want to buy American-made products that remind them of the past and bring them back to simpler times.  That’s the real story behind the products we’re selling.  Jacob Bromwell is so much more than just a line of housewares products.  We’re selling an emotional journey into nostalgia and tradition. 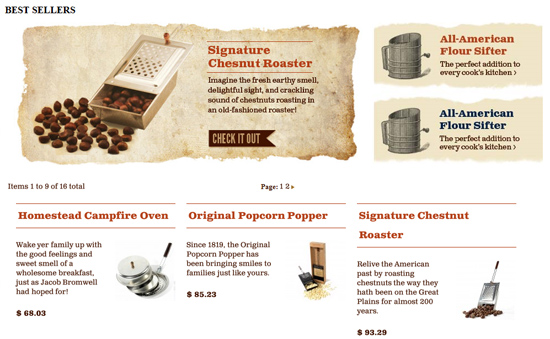 MO:
Continuing down your list of accomplishments, you are the founder of RateMyFraternity.com.  Are you still involved in the site and how successful is it?

Sean:
I founded RateMyFraternity.com and its sister site RateMySorority.com in 2007 while at USC.  The idea came to me after rushing, and eventually joining, both a social fraternity and business fraternity.  During Rush, you only have a week or two to make a decision that will have a significant impact on your entire college career.  Unfortunately, a lot of students end up joining a fraternity or sorority that they wouldn’t have if they’d had more information.  I wanted to make the process easier and more efficient for others.

The websites are now backed by a venture capital and consulting group based out of Ohio, and I am still involved in the day-to-day operations.  We have a talented developer working with us as well, and we’re looking to become the online authority.  We want to redefine the way Rush is done and experienced at every four-year college nationwide.

MO:
When did you first realize you had the entrepreneurial itch?

Sean:
I started the quintessential neighborhood lemonade stand as a child with a close friend of mine.  For the first time, I discovered what a great feeling it was to service demand.

MO:
What’s next for you?  Are you currently working on any new projects?

Sean:
My mind is always working and I am playing around with several ideas in the Web 2.0 space, but none of the ideas have moved into the concept stage just yet.  For now, I am laser-focused on turning Jacob Bromwell around to becomes an American icon.

MO:
What do you feel is the most important skill a small business owner or entrepreneur needs to develop or possess in order to be successful?

Sean:
As an entrepreneur, you need to be able to execute.  Everything requires execution, especially when you’re working with a small team and you can’t afford to hire anyone.  You could have the greatest vision and the greatest business plan in the world, but it’s just an idea until you execute it.  Ideas are worthless without execution.