Shmuel Hoffman creates videos that stand out and give his clients a branding advantage over their competition. His clients include larger nonprofits, businesses, bands, books, production companies and ad agencies. He produces every part of the video-making process, from concept and preproduction, to filming, direction, editing, graphics and color-grading.

Hoffman Productions is a video & media production company operating in New York, Jerusalem and Berlin. They specialize in viral online and advertising videos produced with an artistic and creative heart and eye. 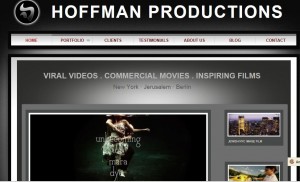 MO: Where did your love of video and film come from? What were your early influences?

Shmuel: From the age of four I studied in Berlin to be a professional musician. I went on to win the national competition in viola when I was 20 – but I knew I wanted my creative work to reach a wider audience. So I studied a bit of still photography on the side while I was finishing my degree. I think still photography has informed my video work more than anything. And I’m the only one I know who edits with the music using phenomenology.

MO: You received acclaim after producing the video,’ Many Faces, One Country’, that went on to win Nefesh B’Nefesh’s Israel in a Minute video competition. How did it feel to be recognized for your work and did how did that recognition influence the direction of your production company?

Shmuel: I’m the kind of person who’s never satisfied. A few weeks after I finish a video, I’m already dissatisfied with it. Being recognized is important, and feels good, but I’ll never really be satisfied until I’m much further along, if at all.

Nefesh B’Nefesh has a wide reach in the Jewish world, so our name did make it out there a bit. But I really have to thank my wife’s marketing and and our active clients for the success we’ve had since then.

MO: How have you managed to position yourself to be the leading videographer in the nonprofit world?

Shmuel: Thankfully we’ve got some great clients who do really important work. I was recently asked to help with a film whose message I just couldn’t get behind – I didn’t feel it brought light to the world – so I declined.

All I can say is, when you do your best and you care about the details, your work will look good. You would think attention to detail and really caring to make good videos would be the norm – especially for someone who chose it as their career – but unfortunately I don’t think it is.

MO: Can you explain why investing in SEO no longer enough to keep ahead of the competition?

Shmuel: Video and social are the new SEO. Video increases SEO, but Google is no longer the #1 most popular site – Facebook is. Youtube is the #2 search engine in the world, which means that after people Google a search, they Youtube it. Emails and ads get higher clickthroughs with videos than images, and nowadays every website needs a video front and center on its website. It drastically helps minimize the bounce rate, and increases engagement and eventual participation.

MO: Up until now you’ve worked mostly in the Jewish nonprofit world, what steps are you taking to include a wider variety of clients?

Shmuel: We’re reaching out more to production companies and taking on more commercial work. I just made a video trailer for a book for Simon & Schuster, and I’ve made music videos in the past too. I also have a few longer-format films in the pipeline, so hopefully those will work out. My wife Margelit is really in charge of marketing so she’s taking care of that, thankfully. It frees me up to do the actual work.

MO: What would be your advice for an aspiring filmmaker?

Shmuel: Forget film school.  The best place to learn is on the job. There’s no replacement for hard work. And if it’s paid, that’s even better.