“It’s amazing to be part of such an agile and creative startup team. I feel like a kid in a candy store!”

Tara Hunt is a self-professed shopaholic and longtime online community member (about 18 years now). Tara wrote a book how the social web is changing business, speaks all over the world and is completely nuts about bringing humanity back into technology. She’s worked with over 30 start-ups and is a serial entrepreneur.

Buyosphere.com is a Montreal-based shopping Q&A Platform co-founded by Tara Hunt, Cassandra Girard and Jerome Paradis in 2010. The concept is simple: you just ask what you are looking for on Buyosphere and the system routes the question to people who know how to find it. Buyosphere leverages the social web to help you find what is right for you, saving you time and uncovering gems you could never find on your own. 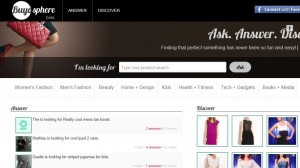 MO: Where does your entrepreneurial spirit come from? What was the first business you ever started and how successful was it?

Tara: I was born the daughter of two entrepreneurs: my father owned his own veterinary practice from the time I can remember and my mother is an artist who makes a living at her passion. So starting a business for me was a no-brainer. I worked for a few years out of college in corporate communications and advertising, but as soon as I had the opportunity I jumped ship and went out on my own. I was a single mom, had a mortgage and very little savings, but I found myself at a crossroads and chose to start my own consulting firm rather than joining another one. I have to admit that I had no idea what I was doing, so I stumbled quite a bit. Still, I had clients and was profitable after about 3 months. I think I was 26 when I started my first company: Rogue Strategies.

MO: I love the name Buyosphere by the way. Did you have a specific personal experience that led you to creating the site or was it an idea that you had for awhile?

Tara: Oh this story is a doozy! We started Buyosphere under another name. A name I like to call “the name we shall never utter again”. It was bad. So bad that we won an award for having the WORST brand name of 2010. The name Buyosphere came after that award. We ran a contest to help us find a new one and ended up being contacted by EatMyWords, the agency that gave us the award for worst name. Alexandra, the owner, said she was so impressed at our humility that she would help me come up with something new. Within a few hours of working together, she sent me a list of names and Buyosphere was on it. I saw it and I knew it was the one!

MO: You say that you realized you were barking up the wrong tree with your first version of Buyosphere. How did you know that it wasn’t working and what changes did you make to create a more successful version?

Tara: We set out to solve the issue of online choice overload and initially approached it thinking that using data would solve everything. So we launched with a version of Buyosphere that allowed people to create a taste profile that we could use eventually to filter out search results web-wide. But there were several issues with this. Number one, you need a LOT of data to get great personalization results and gathering your shopping history and taste data is an onerous task that only a data-junkie loves (0.001% of the population). Number two, that data is years away from being portable because of the lack of web standards in the e-commerce realm. A couple of months after launching, we took a step back and set out to figure out a better way to solve the same issue (choice overload). One day I was demonstrating the site to a prominent New York angel investor and he said, “You have a lot of Quora-like features here.” The lightbulb went off for me. Why not approach solving the choice issue by leveraging the social graph? That’s when the Buyosphere you see today was born.

MO: What problem is Buyosphere solving?

Tara: The web is a bountiful wonderland of shopping…that is until you are looking for something in particular: shoes to go with a new dress or a really great, but inexpensive bike that is good for commuting. Google is the first to admit their search doesn’t deal well with nuances like matching or taste. We believe that it is a combination of the interest and social graph, mixed with data that will solve product search.

MO: Have there been any sites that have launched in the last year that you’ve been impressed with or visit regularly?

Tara: It’s a bit older than a year, but I’m in love with Foodspotting. I’m also a big fan of micro-action networks like IfWeRanTheWorld. And I can’t stop myself from opening my Fab.com emails even though they don’t ship to Canada! I also admire how they’ve pivoted a couple of times to get to such an amazing end result.

MO: What features are you most proud of on the site? Are there any that you’re in the process of developing that you’re looking forward to implementing in the future?

Tara: I’m very proud of the question routing system that works in the background to help people get their questions to the right people. I’m proud of this because we are tapping into the interest graph rather than just the regular social graph. And we’ll be getting deeper and deeper into it as we evolve. Can’t wait for this part of the system to advance. It’ll really be the secret sauce of how we create serendipity on the site. Coming up? All sorts of amazing things, like gamification (but not in the buzzword way – in a way that makes sense for a Q&A platform) and a mobile app and all sorts of goodies I wish were launching today. It’s amazing to be part of such an agile and creative startup team. I feel like a kid in a candy store!