“The effort and resources you put into initial development are only a fraction of your total investment: the rest comes in the marketing phase and in updating and improving your original product.”

Lynette Mattke is lives in a Washington, D.C. suburb and is the mom of 3 children (ages 11, 15, and 17) and the founder and CEO of PicPocket Books, a publishing platform for children’s picture books on mobile digital platforms.

PicPocket Books was founded in 2009 as one of the early entrants into the children’s book app market on Apple’s iTunes. Lynette started the company to offer parents and their kids an educational, engaging and valuable alternative to flashy, and sometimes violent, fast-paced video games, or repetitive videos.

PicPocket Books has gained local and national recognition from media appearances on Fox 5 News TV, the Washington Post, Inc. Magazine, and was one of the first 14 companies selected by Kimberley Clark as a “Huggies ® MomInspired” company. Lynette was also named one of the top 50 Mompreneurs of 2011 for her work in establishing and growing PicPocket Books. 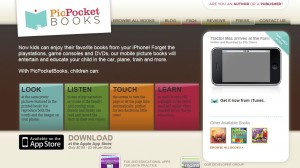 MO: How were you able to develop PicPocket books with no previous app experience or knowledge of selling children’s books? What was your starting point?

Lynette: My starting point was really a convergence of a couple of things. Like many users and developers, I was intrigued with the possibilities of the smartphone touchscreen and the relatively user-friendly SDK for iOS. My husband is an entrepreneur himself who had recently sold his software development firm, so I was used to the idea of building a business rather than working at a salaried 9-5 job. Also, he could offer significant help in building the custom platform we use to produce and publish our apps. I would definitely say that there was a lower barrier to entry into the digital publishing market than there would have been for the traditional print publishing market. When I founded PicPocket Books, it was still pretty early on in the beginnings of the iTunes App Store, so that was helpful. It has since become many times more competitive out there!

My initial responses from publishers were very positive. They were quite keen to explore the new market of picture book apps and to develop a digital strategy.

MO: How challenging was it to combine two areas that you were previously unfamiliar with and turn them into a business? What were the biggest obstacles you faced during the development process?

Lynette: Actually, the development process was relatively straightforward. What I hadn’t quite realized is the the development is only the tip of the iceberg. My advice to entrepreneurs with a product-based business is to consider that the effort and resources you put into initial development are only a fraction of your total investment: the rest comes in the marketing phase and in updating and improving your original product.

There were some obstacles in working with traditional print publishers as we formulated our agreements to secure the digital publishing rights for the content. Especially early on, some publishers had a lot of fear about digital versions of their content and worried that apps and ebooks would cannibalize their already floundering print sales. At the same time, they knew that this digital revolution was inevitable, and that it was not something they could ignore. Also, they were not used to working with a production timeline that was much accelerated in comparison to what they were used to!

MO: I’ve been reading some of the rave reviews and the numerous awards PicPocket has been getting. Have you been surprised at your success and how well PicPocket is being received?

Lynette: Yes and no. I mean, these things don’t just fall into your lap. I guess as part of being an entrepreneur, I am also an evangelist for my brand. I live and breathe this stuff: I’ll pull my iPhone out on the street or at the grocery store to demo my app to neighbors or strangers. I respond to every inquiry and e-mail and I make an effort to make connections and to form communities with people who are also interested in the topics of mobile apps, mompreneurship, kids and media, social media marketing, etc. I have a company and a product I believe in. I love to talk about it, and it is great that the media has noticed and picked up some of my articles and stories!

MO: You say that, “social media presents a whole new set of difficult challenges for parents of my generation.” What lessons have you learned with your own children?

Lynette: My own children had a very gradual introduction to media. We restricted their exposure to TV, movies, or play video games very heavily when they were little. Now that they are in their teenage years, they use computers and the internet for school and homework and as their prime sources for entertainment as well. Navigating the teenage years has always been notoriously challenging, but in this digital age it has become even more so. Social media sites like Facebook, Tumblr, and Formspring are huge draws for the teenage audience and I have learned that it essential as the parent of teens to be familiar with those sites and to have clear rules about their usage. You should expect that your kids, once they get to the stage when they are interested in accounts for those site, will be able to run circles around you when it comes to using them, and if they are inclined to do things that are not allowed, they will. Rules are good, keeping the computer on the main living level of the house is good, but in the end, the single most important thing is to have open avenues of communication with your kids. That part of parenting hasn’t changed! That is why I think it is very important from early on, that as parents we seek out media usage and habits that promote and encourage communication, rather than diminish and discourage it.

MO: Can you tell our readers a bit about why you co- founded the group Moms with Apps? Has it been a rewarding experience so far?

Lynette: MomsWithApps was founded in 2009 by a couple of moms who met over Twitter. We all had recently released apps in the iTunes App Store, and we realized that it was a challenge to achieve visibility in the sea of content that was out there, and we were looking for support not only with marketing, but with strategy and best practices in the field of kids apps. It seemed a natural development to do what moms all over the world do: build a cooperative community by reaching out to other moms for collaboration and support. We soon realized that there was a keen interest in the MomsWithApps group – not only from other mom developers who were working with mobile apps, but also dads, aunts, uncles and grandma developers! Reviewers, educators and parents looking for family friendly apps for their kids joined the conversation, which quickly expanded to include viewpoints on topics related to apps, education, and the intersection of kids and technology. You should check out the articles and links on http://momswithapps.com/!

The collaboration through the MWA group has been extremely valuable. For me, it has been an essential part of making connections and staying in touch with other creators of kid-friendly mobile content, keeping current on new developments and trends in the app space.

MO: What company accomplishment are you most proud of so far?

Lynette: I am very proud of the recognition I have gotten from the media as a successful “mompreneur.” As a mom of three kids with no prior business experience, it has been a big accomplishment for me to create and grow PicPocket Books, especially in this economic environment where it can be difficult to find a rewarding job. “You must do the very thing that you think you cannot do” is a quotation from Eleanor Roosevelt that really resonates with me and has shaped my philosophy as an entrepreneur. My work with PicPocket Books has taught me to practice new skills and to embrace areas outside of my original comfort zone, especially in the area of marketing, social media, and public speaking. When I first founded PicPocket Books, I started at the very beginning with social media and learning how to leverage sites like Twitter, Facebook Fan pages, and the vast sphere of influence of professional bloggers, but now I have become quite facile with those channels!

I am also proud of my role as a panel speaker at various events. One exciting speaking engagement was the Tools of Change for Publishing Conference on the eve of the International Children’s Book fair in Bologna, Italy. My panel topic was “Digital Sales and Marketing Channels,” hosted by O’Reilly Media. I presented on another recent panel for the webinar “The Challenging Business of Kids’ Apps,” also hosted by O’Reilly Media.

Oh, and also publishing over 140 mobile apps through PicPocket Books to the iTunes App Store, and bringing parents and their kids the option of pulling a mobile book to read out of their pocket anytime and any place! Here’s the link to our full collection on iTunes.