“Our web server at the time crashed multiple times during this 24 hour period, and it eventually resulted in our web hoster firing us: telling us that our website was too popular to be hosted on their servers!”

Tom Churm – CEO of Online Alarm Clock basically created the online alarm clock business. On March 24th 2006 he created OnlineClock.net and as far as he knows, it was the original alarm clock website to go live.

Since going live OnlineClock.net has added dozens of online clocks, stopwatches, countdowns and other time tools to the site and have gotten over 2.5 million users each month. 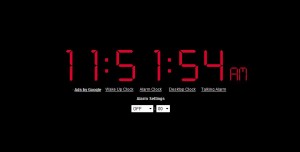 MO: Why did you see a need for an online alarm clock, and did you plan to create a business around it when you initially created the site?

Tom: I was working as a web programmer and was not only interested in coding websites as a job…it was also my hobby. This means that, after I’d leave work, I’d actually go home and work on programming my own website projects just for fun. My goal was to come up with an idea for website that would become really, really popular and successful.

The idea for the world’s first website-based alarm clock came to me one night as I lay in bed, having problems falling asleep. When the idea of an online alarm clock came to me, I knew it was a good one…but I didn’t know exactly how good. But I sprang up, out of bed, and jotted the idea down on a piece of paper so that I wouldn’t forget about it. And, sure enough, the next day, I placed the first beta version of the site online. This was in March, 2006. Truly, I had no idea that a full business would spring up around this.

A lot of dumb luck was involved. I have placed dozens of websites online in my day, but this is really the only one that’s become so successful. To any aspiring developers or entrepreneurs out there, I’d advise using the shotgun approach: try out a lot of different ideas and approaches, and then simply wait to see which of them seems to “click” with people.

MO: What makes your online alarm clock the BEST online?

Tom: Simplicity. This is something that most website creators just don’t seem to get. Most people don’t want a complicated website with dozens of features and fancy functions! They want something that’s just dependable and incredibly simple to use. I’m convinced that this is the reason why Twitter has become so popular, for example. It’s a simple site, and it does what it’s supposed to. Period. All of my favorite and most frequently used websites have this in common: simplicity in design. Our alarm clock is, quite frankly, still the best because we’ve kept it simple.

MO: What did being featured on the first page of Digg do for you in 2006?

Tom: Getting on the first page of Digg set off a viral kind of “snowball effect” for the website. This was back in Digg’s heyday, and making it to their front page meant that we had hit the big time. Our web server at the time crashed multiple times during this 24 hour period, and it eventually resulted in our web hoster firing us: telling us that our website was too popular to be hosted on their servers!

But the long-lasting effect of making it to the front page of Digg was that people who themselves ran blogs and websites discovered the concept of the online alarm clock, which was new at the time. They found it intriguing and useful. This was so new and noteworthy that literally hundreds of them wrote about OnlineClock.net on their blogs and websites, and this resulted in a huge boost in our popularity. Of course, with all this popularity and success, literally dozens of imitators arose to try to copy us too, but that’s a separate story…

MO: You have dozens of online time tools, but your start page only features the alarm clock – why the decision to do this?

Tom: We do have a navigation menu that can be accessed by clicking on the small clock icon on the upper left of the page. As with all of our design decisions, we find it very difficult to compromise in matters of simplicity and minimalism. Sure, some people may not find our navigation so easily. But we’ve managed, after five and a half years, to keep our homepage clean and full of clutter. And how many other websites can make this same claim?

It’d be painful for us to make a change to the design of the website which would compromise its simplicity. I’ve had enough feedback from our site’s regular users to know that they love the fact that we haven’t “sold out” or filled up the site with a lot of unnecessary clutter, and this is the way we want to stay.

If you use OnlineClock.net regularly, and are not a total internet novice, we’re sure that you’ll discover our other clocks eventually…

MO: Why did you decide to change the site to HTML 5 instead of Flash?

Tom: This change has not yet taken place…it’s currently in the testing stages. Flash has several disadvantages, including the fact that it doesn’t run on iPhones and iPads. Also, it often has security holes.

And sometimes running Flash files consumes unnecessary computer resources. We believe that switching to HTML 5 will make our online clocks more compatible with a wider variety of devices, and more fit for the future of the internet.

MO: What other features do you hope to add in the future of this site?

Tom: Sorry, but we’re not willing to make our plans public, simply because we know that there are copycats out there who will read this and then try to beat us to the punch! Suffice it to say that our goal is to expand, offering a wider and wider range of online time tools. The challenge is to do this without jeopardizing the site’s minimalism and integrity of design…but we’re convinced that we will succeed in this.

OnlineClock.net will continue to be a fun, useful website that many devoted users will regard as a true internet classic.