“We take pride in dissecting and observing things that are new and interesting, then implementing these things in our own ideas and designs.”

Headquartered in Durham, NC with an additional presence in New York City, Two Toasters was founded in 2008 just a week after the opening of the App Store. Two Toasters has worked with a variety of clients ranging in size from industry giants (Dick’s Sporting Goods, Lexus, Acura) to venture-backed startups (Airbnb, Bitehunter, Room77). 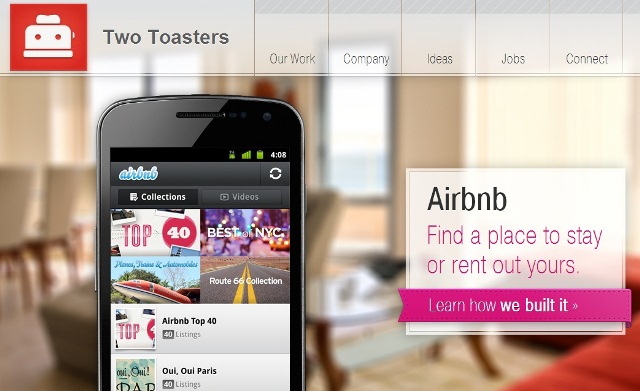 MO: I have to know what inspired the company to be called Two Toasters?

Rachit: Years ago we were all (the co-founders) watching an episode of The Office. In this particular episode one of the characters is disgruntled after a called-off wedding results in him having to keep his toaster gift. As he puts it, his “house now has two toasters”. The episode inspired Daniel, our Director of Strategy, to purchase the domain name www.twotoasters.com. We aptly forgot about the domain until we started building apps for the app store and needed a business name to sign up for a developer account. In a bind, we thought, heck we own www.twotoasters.com and it’s a pretty cool name for the time being.

We always thought when we got serious or big we could change it and rebrand. Well, as you know we are still called Two Toasters. It’s not the most conventional name, but as it turns out its memorable and definitely resonates with our fun culture.

MO: You initially focused on releasing apps under the Two Toasters brand but soon switched to being a firm who develops them for others? What inspired the change?

Rachit: We realized that we could generate good revenue from consulting. We were bootstrapped, so revenue was an important factor for us. Coming off another startup that hadn’t produced any revenue we were anxious to “keep the lights on”.

In addition, we wanted to gain experience at rapidly building products, and working on our own apps would not have allowed us to build up our skill set as quickly or with as much depth.

Lastly, the ability to work on multiple interests and projects at the same time was something we valued. Working on different projects has elevated us into a lot of startups and has allowed us to meet some amazing people.

MO: What are some other ways that Two Toasters has evolved since launching in 2008?

Rachit:  We have a bigger emphasis on quality. When we started out we were still figuring out what worked and what didn’t in the mobile space. If you contrast our work that we are producing now compared to four years ago, it’s improved several magnitudes across design, development, and the overall build process. Once we got recognition for our Gate Guru app on an Apple TV commercial and other national publications, it really clicked with us that we could compete with the best out there. We’ve gotten better by putting ourselves in the position as one of the best highest quality mobile product development firms.

Being a top tier firm means making sure that we bring on the best talent that we can possibly get, continuing to always think about how we can improve on what we do and how better we can serve our clients. For example, when we started, the mobile strategy component of our business was an afterthought. Now we do a lot to help make sense of Client’s business requirements and what they should be doing in a mobile context to maximize their investment.

MO: What are some tips for creating a company culture that fosters great design?

Rachit: It helps that my brother and co-founder Adit is a designer. As a founding member of the Two Toasters team, he set striving for great design as a core goal and we have used it as a differentiator in the marketplace.

In terms of culture, we encourage our designers and developers to give their own input on how a product should look or feel. As a whole our company is quite critical of great work produced by other app developers as well as our own work. We’re always thinking about why certain apps are getting so much recognition. We take pride in dissecting and observing things that are new and interesting, then implementing these things in our own ideas and designs.

MO: Can you provide a recent example of where you’ve partnered with your clients to create a unified vision which was executed by leveraging each other’s strengths?

Rachit: We’ve had the pleasure of working with the social fashion startup Go Try It On over the past two years. When they came to us they needed a team that could take their online fashion community mobile. We worked very closely with them to help them decide on the mobile strategy that would best suit their needs. This included considering functionalities of the app, design and flow of the app, and features of the app. We’ve released four versions of the Go Try It On app and continue to work with them as an extension of their team.

MO: What are your current plans for expansion?

Rachit:  We’d like to grow the Durham headquarters and have a much bigger presence in North Carolina. We’d also like to grow our satellite offices around the country and get closer to our clients and all the action.

As far as services go, we are staying active in responding to where mobile apps and tech are headed. This means building hybrid apps – that is apps that have both native components and mobile web components. Take Go Try It On for example. While the app is native, the style tab is actually all mobile web. Go Try It On exhibits the idea that you can build an app that has top notch native performance throughout the majority of the experience, but when it comes to elements that need more flexibility or need to be more dynamic you can use mobile web.

We also pride ourselves on giving back to the design and development community. In the past we have developed frameworks such as Restkit, which powers a sizable portion of iOS apps out there. As we grow we will continue to devote time to building underlying technology and frameworks that make apps more robust and performant.