Val Katayev is the Founder and CEO of ToneFuse.  Val’s entrepreneurial career began at the ripe age of 8 trying to make ‘something out of nothing’ and selling it on the street in his former home city of Tashkent, Uzbekistan. Soon after, Val moved to the U.S. with his family at age 10.  Once settled, Val’s entrepreneurial spirit returned and he founded a very popular video game site at age 17 called PSX Extreme. At the age of 18 Val started Poise Media, a performance marketing agency that eventually generated high volume sales for over 700 advertisers, including many Fortune 500 brands. Poise Media ultimately served as the springboard for ToneFuse, which was spun off as an independent company in early 2009.

ToneFuse, is a music marketing platform that provides services to both publishers and advertisers.  For advertisers, they offer the largest music-centric advertising inventory on the web, second only to Google. In fact ToneFuse’s reach is currently wider than MTV and Vevo. For publishers, ToneFuse creates custom solutions to help them monetize effectively.  ToneFuse has a who’s who of the music industry as clients including MTV, Last.fm, AOL Radio, CBS Radio, Lyrics.com, and Billboard to name a few.  Currently, ToneFuse reaches over 500 million unique visitors per month and was recently ranked by comScore as 5th largest online music property in U.S. and one of comScore’s Top 10 Growing Properties.

MO: You spun off ToneFuse about two years ago.  What was your vision for it then?  How has that vision changed?  What was the most unexpected event in your company’s evolution?

Val:
The original vision was to build up a company that was centered on capturing and monetizing music traffic. With our RingtoneMatcher product we aggregated a massive audience and I strongly felt that this was the ideal audience for brand advertisers. The mission all along was to “sell music without selling music”. Interestingly enough the vision hasn’t changed, in fact the vision only unfolded further than we expected as we kept discovering new ways to mine music related data to predict user’s behaviors.

For example, did you know that compared to an average person, John Lennon fans are 47% more likely to be in market for travel services and 101% more likely to be pet owners? ToneFuse knows this and far more about user behavior on the web. 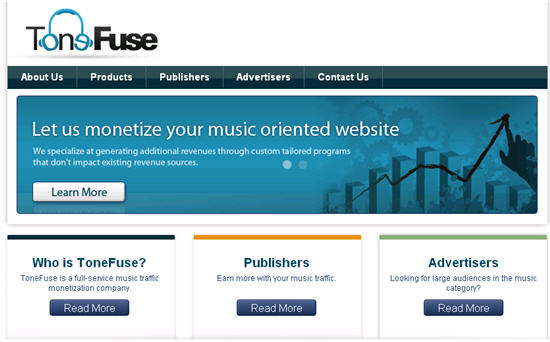 MO:
A lot of entrepreneurs think that music is a black hole of entrepreneurship where you are doomed to fail (mainly because of the record labels).  You’ve clearly survived, what have you learned about dealing with the biggest players in the music business?  What have been some of the biggest challenges you’ve overcome?

Val:
First I want to say that I have a lot of respect for entrepreneurs who have launched music companies knowing that the odds are stacked against them. And, luckily some of them have proven the “black hole” theory wrong.

What kept ToneFuse successful along the way goes back to our mission of “selling music without selling music”. Our focus was to sell everything that surrounds the business of music but usually without getting involved in selling or marketing the music itself. The kind of music-centric products we’d focus on selling are ringtones, music-related advertising, guitar lessons, music games, concert tickets, and the list goes on.

Probably the most notable challenge for ToneFuse was to shed the label of being a ringtone company.  In less than 2 years, ToneFuse launched ToneFuse Music, ClickFuse, GuitarMatcher, and even managed to spin off a mobile ad company, MobileFuse.

MO: Advertising is clearly a game of scale on both the publisher and advertiser sides.  How did you solve this chicken and egg problem when you got started?

Val: Originally, for about 5 years straight my first company, Poise Media was the largest external driver of subscribers for Rhapsody. That helped me secure some good relationships with music site publishers, study behaviors of users that pay for music content and build out RingtoneMatcher, a product that delivered substantial revenues for music sites. Our ability to generate significant new revenues gave us access to much of the Internet’s music site traffic and those same publishers would eventually take advantage of our new products as quickly as we could roll them out, because they delivered results. 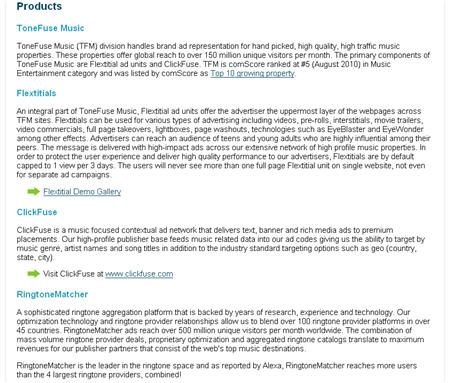 MO:
Your first website was a video game community.  What sort of skills have you learned from PSX Extreme that have helped you transition into running a music marketing company?

An ad supported video game site is not going to produce much revenue to support a fully staffed team. So I quickly learned to run a tight ship and be involved in many different aspects of the business. This style of management stayed with me, thus making all of my companies extremely agile and I have yet to need VC financing or bank loans to build or sustain my companies.

MO:
You’ve talked about the economic downturn being advantageous for you and your company.  Could you tell us why you think that?  How have you taken advantage of the downturn?

Val:
While the overall public perception is that the “great recession” of 2008 was the only major downturn in the last decade, for someone in the Internet ad space, year 2000 was far more devastating. When advertising dollars dried up back in the early years of this millennium, I took advantage of the buyer’s market for ad inventory. Furthermore advertisers switched to paying for performance and under Poise Media I was able to marry paid search marketing (then in its infancy) with performance advertisers.

The “great recession” of 2008 was much different. Ad rates didn’t really go down, but nobody had the cash. All of our competitors, after being backed by investment dollars and operating with losses, ran out of cash to spend on customer acquisition. ToneFuse being profitable with a solid cash position, stepped in and grew its market share substantially from 2008 and on.

So I guess I can say that I’ve been “lucky” enough to come across two economic downturns. On the other hand my stock portfolio didn’t enjoy that same luck.

MO:
I noticed you also have quite the domain portfolio (many 3 letter .coms and generic names).  Is that a side business, hobby or something else for you?  How big a deal do you think domain names are in startups?

Val:
If we can go back 100 years and know what we know now, we’d all be buying prime real-estate in NYC and LA. Domains are real estate of the Internet so I’m definitely a big believer of domains as a side investment. I’m not actively involved in domaining but have been fortunate enough to secure a strong portfolio of domains mostly between 2005 and 2008.

Success of a startup is largely driven by its management and product, but a domain can easily help a product’s positioning and potentially give it quicker market adoption especially for ecommerce sites that rely heavily on positive search results.