“When you start something like this, it’s really going to take over your life, at least in the early stages and maybe even in the later stages.”

Mike:
Hey, guys. It’s Mike Sullivan. Thanks for joining us again today on MO.com, where we feature small business owners and entrepreneurs and bring you hints, tips, insights, and perspectives on what it takes to be successful. Joining us today is Brian Kent. He is the co-founder of Flip.to. Flip.to is a startup helping the travel industry make more money by becoming more social. This company started about 12 months back and is fully self-funded.

Brian, thanks for joining us today. To give us a little background, could you just tell us how you got your start?

While in there, I actually met my business partner, Gill. We were working for a private equity firm at the time. It was your typical story, kind of unhappy, looking for other things to do. After an office reshuffling, we ended up sitting right next to each other. Our offices were right next to each other, in sort of a U-shaped area. We were just kind of left to ourselves. We just started to brainstorm, think through things that we wanted to do. That was about five years ago.

We just took the plunge, left, and started building our first product while we were building up our consulting business, which is Novologies. That’s basically how we fund the products. We’re a web startup with a consulting firm attached, so we can bootstrap the stuff that we’re working on, the stuff that we really want to do, I guess.

Brian:
Yeah. We launched Flip.to about a year ago. What it is, is a service for hotels, restaurants, airlines to turn their guests into advocates, to get them to spread the word about their upcoming trip, to help boost brand awareness, and to get the word out there on their social networks. This is usually valuable, especially for boutique hotels, turning their guests into what effectively is an extension of their marketing force.

Those are the best people that you really want to learn from anyway. I mean, I’d rather hear from my friend about a new hotel or a boutique hotel that they’re staying at than from an ad on the side of Google or something like that, because it’s more trusted. You figure that your friend did the research first, then vetted the place, before you go there.

Mike:
Flip.to is self-funded. Does that just mean that you were able to keep the startup costs low?

Brian:
It’s a combination of things, but I guess one of the most important things is that we actually make money, which is kind of unique now in the startup world, to some degree. It’s primarily focused on getting engagement up, raising your number of users, then figuring out the business model later on. I guess we were a little bit more traditional in that sense, in that we think about that business model first. If one’s not there, we don’t really go set out and hope that one magically appears.

We actually made money from day one. Our very first client, our very first beta client was paying. They pay a monthly subscription, and that’s how we helped self-fund it. It’s really a good way to go. I’d recommend that more startups try to figure out how to make money from the get-go, as opposed to going on that cycle, that treadmill of raising money. Because once you start, you can’t get off.

It’s also, the type of person who usually starts companies or is an entrepreneur doesn’t really want a boss, wants to have full control over their vision. Once you start raising money, you start to have a few more bosses than what you had previously.

Mike:
You are the co-founder of Flip.to, which means you have a partner. How does that compare, do you think, to starting a business on your own? What benefits do you think you gain from a partner?

I’m not talking about month to month. I’m talking day by day, where you feel like you’re killing it one day. The next day you wake up in the middle of the night thinking, “What the hell am I doing? I’m out of my mind, thinking I can pull this off. This is too big. I should go get a real job,” or something like that.

It’s helpful having someone else there that you can talk to, you can argue with, and you can bounce ideas off of. I think I would definitely recommend having a co-founder. There’s obviously, when you have two people, there’s loads more that you can accomplish. You have larger networks. There are just lots of benefits. I don’t think that that should dissuade someone from launching by themselves. If you have an idea, you can build it yourself. But I think you should definitely have someone else there that you can work with.

It’s probably a good idea to also have someone with a big share, someone who has committed. I know that sometimes there are founders where you may have one founder who has the largest chunk, who’s maybe the first founder or something, and then someone else who has a small chunk. I think, obviously, incentives aren’t as aligned as they should be. You need everyone going full force, full steam ahead. 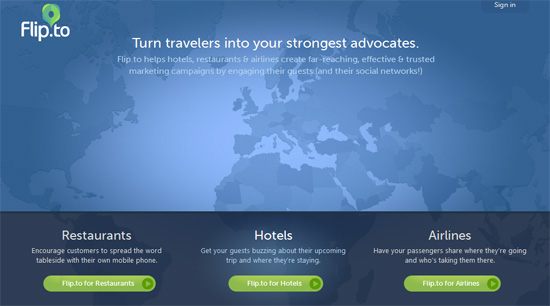 Mike:
Tell me about your growth over the past 12 months, and how you’ve been able to spread the word about Flip.to so quickly.

Brian:
We launched, I guess, the end of the first quarter last year, so it’s been about 12 months, maybe 13, 14 now. We started with, again, the idea of finding paying customers, so that we can grow this. Before we even finished the product, before it was fully baked and out the door, we started talking to people; telling people what we were up to, getting feedback as we were building it.

Even before we finished the product, we had already landed that client. The way we did that was we actually reached out to some established vets in the industry. One of them actually became our leading proponent. He started talking about us. He really loved what we were doing, and he helped us land that first client.

This is a big deal. This is probably the biggest hurdle for most products. It’s when you have absolutely nothing, or you have maybe even just the glimmer of a product. You don’t even know what it’s going to be. You don’t know what it’s going to grow up to be, and you have zero customers. You’ve got to get in the door, and then once you get in the door, you’ve got to get someone excited about it or make such a compelling pitch that they’re going to jump on board, even though you have no track record. We did that by getting people established in the hospitality industry and the hotel industry excited about it.

This leading proponent of ours is actually now our VP of Business Development. He helped us land that first client, and that was the start of it. That was a boutique hotel in Chicago. Since then, actually about a month or two ago, that first client, that first hotel was actually owned by a hospitality management group. Their other 12 or 13 hotels have come on board since then. That has been a pretty strong affirmation of what we’re doing.

Once we got past that initial inertia, and you’re constantly finding that initial inertia, right? Once you get one, it’s still a struggle to get two. Then it’s three, then four. But once you’re moving, you can play off the other customers. You can tell them that we have customers, we have traction. Now we have our results, and results make it a lot easier. You can talk about what you’re doing, and you can talk about what you’ve done. That has been huge for us.

How did we spread the word? People are looking for this. We’ve written a lot of articles, a lot of posts, a lot of blogs. Reaching out to a lot of folks directly, and using a lot of third parties who really support what we’re doing making referrals.

Mike:
What closing words do you have for others out there who are considering starting an online business?

Brian:
Think it through. Make sure that you know it’s something that you want to do, both professionally and personally. Running a startup is very much . . . I guess, it’s a little cliche, but it’s kind of like a lifestyle. I mean, it’s not something that you can expect to go 9 to 5, and that’s going to be it. When you start something like this, it’s really going to take over your life, at least in the early stages and maybe even in the later stages. I have no idea. Maybe it’s forever.

You’ve got to make sure you think it through. If you have a family, you have to consider that. If you have a boyfriend or girlfriend, you should talk to them, make sure they know what you’re getting into. Like I said, it’s really time consuming and it’s a roller coaster. There are going to be times when you think you’re doing really well. There are times when you think you’re crazy, and there’s lots in between. I think you should really think it through.

Aside from the personal aspects of a startup, one of the most important things I think you should do whenever you’re launching a product is making sure that you’re going out there and talking to people and making sure you’re getting validation that what you’re doing makes sense and is right and that people will want it and will pay for it.

It’s pretty easy to coddle an idea. You have an idea in your head. You really love it. You’re going to whiteboard it to death. You’re going to try to think it through, make sure it’s absolutely perfect. Craft it, constantly craft it. There’s actually a video out there, by Ze Frank, called “Brain Crack.” You can just go watch that. He explains it better than me. But the idea is you’ll coddle this idea, and you’ll never get it out there. It feels good to keep thinking about it and knowing that if I ever get to building this thing, it’s going to be huge.

Now, the one caveat I would say, which is something that you hear a lot now, is that you should be embarrassed by your first iteration of your product. It doesn’t really matter. Just get it out there. I would say make sure you have something that’s half decent. Don’t just get out a complete steaming pile of you-know-what; because first impressions do matter, especially in our business, in the hospitality industry. People want to see something that’s somewhat polished. It doesn’t have to be perfect. It doesn’t have to be feature complete, but it can’t look like you’re a total amateur, or it’s just something that seems like it’s really far off to becoming a polished product. Because people don’t really know or understand the difference between back end and front end. If they see a front end that looks kind of junky and hacked together, you can have the most brilliant back end. You can say, “Well, we’re just styling it, and that takes us two days to fix.” They don’t get it. They don’t understand that.

Make sure you have something that people will realize that you’re a credible company, and this is the first iteration of it. Again, once you have that, though, do get it out there, talk to people, and figure out how to make money.