“We designed the app to be as welcoming and intuitive as possible, so that even someone that has never bet on anything in their life can use it and enjoy the rush of betting on sports with the chance to win real prizes.”

Frank Wilson and Jamey Forkins were both working in the finance industry for the past 5 years when they decided to create Gamblino and bring social sports-betting to a vastly underserved market. They left their jobs in May and have been working full time at Gamblino ever since.

Founded in June 2012, Gamblino provides an interactive and engaging way to enhance fans game-watching experience through free social wagers on their favorite games each week. Any iPhone user can download Gamblino’s signature iOS app free of charge and begin placing bets with friends and strangers for a chance to win prizes during the country’s biggest sporting events. Gamblino is a privately held company based out of New York City. 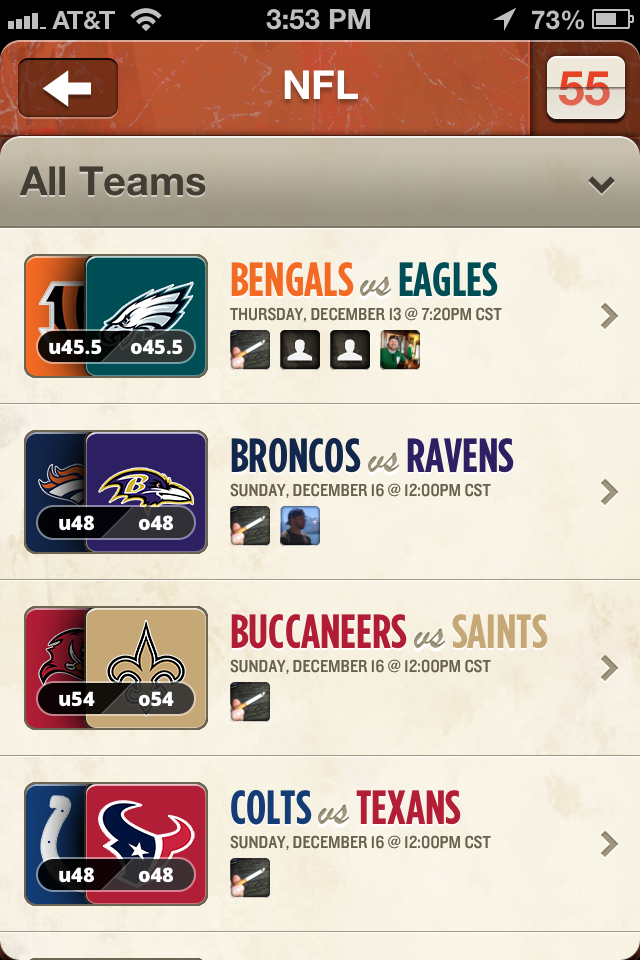 MO: Can you talk about how you’ve both gone from careers in the finance industry to launching Gamblino?

Jamey & Frank: We first came up with the idea for Gamblino after getting frustrated that our group of friends could never keep straight all the bets we were making with each other every weekend. We always had these convoluted group text messages and email chains each Monday to figure out who had bet each other on what game and for what stakes. After one particularly confusing weekend worth of bets, Frank suggested that we should create an app that could track all that information for people. We began talking in earnest about leaving our jobs to pursue Gamblino pretty much as soon we came up with the idea. For maybe four or five weeks, we’d spend all day at our jobs and come home to continue to work on developing our idea for Gamblino. By the time that we both left our jobs, we had a very clear vision of where we wanted to take Gamblino, and what massive potential the product had. It was still a pretty wild leap of faith to take, but it’s been one that we’re both still extremely happy to have taken.

MO: How does Gamblino work? What are some of your favorite features of the app?

Jamey & Frank: Basically Gamblino allows users to bet on sports using current Vegas lines, but instead of betting money you’re either betting your friends for points or competing in free contests to win real prizes. There are three ways to use Gamblino.

1. Log on to the app and find a national contest to join. Users can bet against the app database for the chance to win big ticket prizes.

2. Invite friends, colleagues or family members into a custom group where users can keep track of who’s ahead of the pack this season by making and accepting bets with each other throughout the game, week or entire season.

3. If fans happen to be in NYC, Chicago or DC, they can find a local bar that’s hosting a Gamblino contest on game day. When they get to the bar & place their bets, they will have the chance to win instant prizes, like buckets of beer or appetizers. If you’re not in one of these cities, don’t fret, Gamblino will be heading your way soon.

The benefit of the app-wide contest is that anyone in the country can play, so users in cities that don’t yet have a Gamblino partner bar can still win free prizes. We are most excited about building up the app-wide prizes into big-ticket items. There are some pretty cool things on the horizon for these contests and we’re excited to share them soon.

MO: You’ve faced more than an average amount of obstacles on the road to entrepreneurship. How have you managed to stay motivated and focused when facing one challenge after another?

Jamey & Frank: We’ve joked a few times about how when one of us is feeling down, the other is always there to pick them up and get them focused again. In fact, that’s been such a key part of keeping our motivation that we have no idea how single-person startups do it! Mostly, though, we both really believe in the potential for Gamblino to be an incredible product and an industry leader in a market that we believe is going to grow exponentially in the next few years. Every time we accomplish a goal, we use that as fuel to drive us to keep working toward the next goal, which is a great way to keep pushing towards making Gamblino the best product it can be.

MO: Other than money, what are the biggest barriers to your success right now?

Jamey & Frank: User acquisition is our number one priority right now. We designed the app to be as welcoming and intuitive as possible, so that even someone that has never bet on anything in their life can use it and enjoy the rush of betting on sports with the chance to win real prizes. At the same time, Gamblino is powerful enough to handle everything a seasoned sports bettor could want. The key for us is reaching both demographics, and bringing them all together within the app. As we build out our network of partner sports bars as well as enhance the Global Contest prizes, we hope to continue to reach new customers and grow the user base exponentially in our first year. 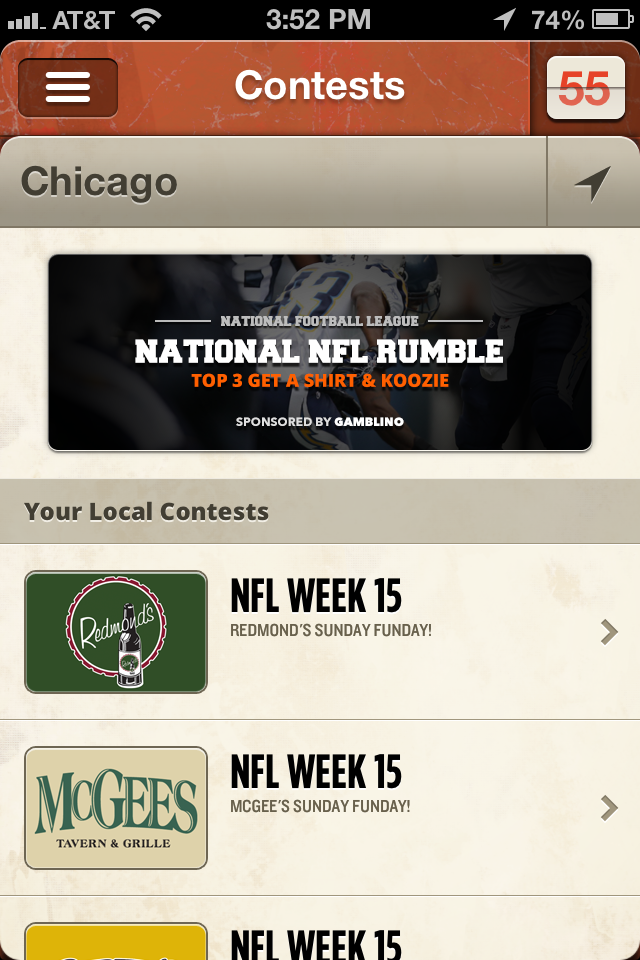 MO: What advice would you give to someone who had a great idea for an app but isn’t sure how to take their concept to the next level?

Jamey & Frank: Talk to as many people about your idea as you possibly can. It’s incredibly beneficial to talk to people in the tech industry about your idea and how you can make that vision come to life. But it can be just as useful to talk to your friends that aren’t that tech-savvy, so that you can be sure to build your product for the larger market. Most importantly, talk to your future customers. We spoke to several bar owners and managers before setting out to build the product, and that played a huge role in building a product that has been very well received as soon as it hit the market. Finally, do everything you can to stay positive and not get burned out. Don’t forget to breathe every now and then, catch up with friends, or just do something away from the business. It’s a long, uphill battle to bring your idea to life–stay resolute and just refuse to give up.

MO: Can you elaborate on your plans to build out the Global Contests within Gamblino and how that will enhance the user experience?

Jamey & Frank: We have some strategic partnerships in the works that should make for some pretty awesome Global Contest prizes down the road. All we can say right now is that the prizes will be exciting, captivating the biggest fans of several of the major US sports. Follow us on Facebook to make sure you don’t miss out on the big announcements!