“Free users are our most vocal and critical users. We can experiment and innovate on DynDNS.com because we get the most honest feedback there.”

Domain name registration, premium domain auctions, and domain monetization services____________________________________________________________Jeremy Hitchcock is the CEO of Dyn Inc. Jeremy isn’t the founder of Dyn Inc, but he is the unlikely CEO.  Jeremy’s story at Dyn begins as an unpaid shipper.  His job included putting boxes inside boxes.  Incredibly, the unpaid shipper worked his way up to the role of CEO.  Jeremy originally started studying chemistry at Worcester Polytechnic Institute, but because of his involvement with Dyn, he ended up graduating summa cum laude with a degree in Computers and Management.  Jeremy’s role has evolved to the point where he holds a CFO and CEO position at Dyn Inc today.Dyn Inc. is an internet infrastructure company that provides domain name system (DNS) services.  Their history begins with a free service called DynDNS.org which was a free DNS service that anyone who tried to host their own website off their personal computer many years ago probably heard of (and perhaps tried).  Dyn Inc started with a free model and evolved as many companies do (but well ahead of this latest curve of freemium services) through donation based models until they created a premium (see: paid) offering called the Dynect Platform.  Dynect offers advanced DNS related services to customers including but not limited to: Round Robin Load Balancing, CDN Management, Traffic Management, and Active Failover.  Dyn has picked up an impressive Who’s Who of internet companies along the way for their service offering such as Twitter, 37Signals, Indeed.com, Mashable, Gowalla and Zappos.MO:Mailroom to CEO is quite the story.  I am sure you’ve told the story before but I think I have to ask you to re-tell the story for our readers.  How did you meet the founder of DynDNS, end up in a mailroom and work way your way up to CEO?Jeremy:I met up with Tim Wilde who would be the founder of Dyn Inc. (DynDNS.org has been around since 1998 but we incorporated in 2001) at the Web development office at WPI.  He was working there full time and also a part time student and I was a doing a work-study.  I started off packaging up some servers to send out to a new site.  In a few months, I was doing a mix of accounting/coding/customer support.  Asked for the title of CFO a bit later, basically joining Dyn full time within a year or two while I was still in school. Tim moved out to California in 2005 and left the company in 2006.  Tom Daly became President and I became CEO.  It was a pretty gradual transition. 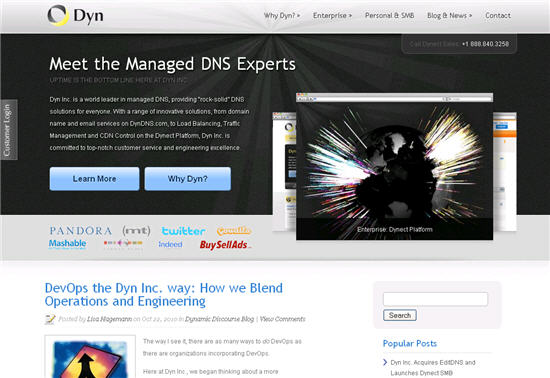 MO:Dyn has tried quite a few business models over the years from free, donation based and paid models.  I also saw your reading list had Chris Anderson’s Free in it.  You’ve essentially gone the opposite direction and done it well.  What sort of decisions and tradeoffs did you make with each change of your business model?  How did you handle legacy customers/users?  If you were going to do it again would you do it differently or was it a progression that had to occur for Dyn to succeed?Jeremy:We started with free and kept going up (DynDNS.com for individuals/SMB and then the Dynect Platform some years later for enterprises) and we still have a free service.  The freemium was never deliberate, we used this concept of keeping your account fresh by logging in or touching your host as a way to keep our costs down when we were meagerly fueled on donations.  Our goal is to have infrastructure services from free to the biggest networks.It took a long time to move from donations (one-time fee) to a fee (subscription).  It was a big change and a lot of last minute requests.  At the same time, it just wasn’t sustainable as we saw the number of users we were committed to grow – it was like a pyramid scheme.  We grandfathered them all in, 7.5 years ago and still honor that commitment.  That’s something that’s extremely unusual and those users still enjoy that non-expiring service.  In terms of monetizing users, it’s a tough model to do.  Constantly work on it.Free users are our most vocal and critical users.  We can experiment and innovate on DynDNS.com because we get the most honest feedback there.Not sure what we would do differently if anything.  We did the best we could with what we knew at the time.  I think we were too insular for a while. 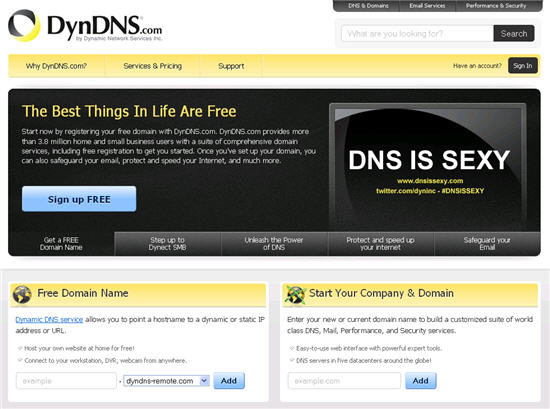 MO:You started working at Dyn while in university if I understood correctly.  You said it changed your plans in terms of what you studied.  Did you see learning opportunities in the academic setting that would open up doors for your company?  You also seem to still play an active role in the education system locally (Trustee of the Community College System of New Hampshire).  What sort of classes really impacted you and your ability to work at Dyn and become the CEO?  What is missing from our education system that you think can be taught to entrepreneurs and intrapreneurs?Jeremy:I planned to leave with a couple majors but left early with only one (so I could finish with something J).  WPI is a flexible university, so I took more advantage of diverse classes, especially the higher-level classes (no formal prerequisites).  My favorite class was probably organizational science but I do miss chemistry (what I declared when I started).  Having a background in technology for non-tech people and business for technology people should be required.I highly believe in education as a core infrastructure for a community.  Dyn doesn’t compete with people the next town over or even in different states, it’s on a completely global stage.  We need to be competitive which means to inspire children to be creative, good members of society, and well rounded.We have a pretty inflexible education system at a lot of levels.  We use Carnegie units as our basic unit of education to which all K-12 education is based on.  Sure, there’s basic English and math – that’s critical – but who is doing to develop and design the next iPhone and how do you fit that into a math or science requirement? The accountability bandwagon got going too strong and teachers became enemies.  Between federal, state, and local control, it’s hard to innovate and change how we teach.  That’s probably why I love the community college system (in addition to being on an advisory board for WPI).  It’s well managed and we respond to programming changes on a dime.  There’s a healthy interaction with the business community that is common across community colleges.MO:You provide an infrastructure service that makes sure people can find things properly on the Internet.  It’s a huge responsibility which meaningful consequences for some very large companies.  How do you deal with and handle the responsibility?  I imagine at an infrastructure level there is a lot of competition and a lot of cooperation between providers?  Is this true and if so, how does one balance the issues?Jeremy :Everyone always asks how I’m never stressed. No clue, I just let it roll.  You do your best and just get it done.  If you stumble, figure it out and own it.We believe in cooperation, coined at FIRST, the robotics program that Dean Kamen started (also a fellow WPI-er and Manchester area resident).  It’s cooperative competition.  We all power Internet infrastructure, a huge distributed tree that we each have responsibility for.  A strain on one branch puts others at risk.  We’re pretty active on the business and technical side at different shows, events, and conferences.  There’s a new DNS security regime (called DNSSEC) that we play a pretty active leading role on (one of the first registrars to support DNSSEC and the first managed DNS provider to support it).  W also hosted Inside Baseball, a DNS insiders event.You always work to balance trust of working with what others would describe as competitors with sharing too much or too little.  Honesty and making light of the issue helps.  We’re all trying to improve our offerings and be more relevant to customers but we are all more successful if we work together.MO:You’ve worn virtually every hat at Dyn as far as I can tell (legal, finance, hr, marketing, products, systems, etc).  You’ve been described as a jack-of-all-trades.  What is the biggest challenge of being able to perform almost every function within a company?  How do you decide where your time is best spent and avoid micromanagement?Jeremy:Yes, and I’ve enjoyed them all!  Recognizing that each is a different discipline and has it’s own way to be great at it.  Each year or two, my role has significantly changed.  Basically, it would be the realization that we needed some new skill, I would go off and work on it, hopefully learn it, see how it fits at Dyn, and then institutionalize it.  It means looking for problems that the company should solve, either internal or external. It’s a great learning process and I still have a long way to go. I try to focus my time on things where no one is paying attention.  That can be frustrating internally since it seems that I’m usually looking for problem to solve.The challenge with having a background in everything is how easy it is to start working too much in a single field.  The perspective should be used to better understand how product and finance or marketing and engineering go together instead of being a bottleneck.  If you stay out of that, then you don’t micromanage as much.MO:What are the biggest challenges facing Dyn now and in the future?  What’s the future of the DNS system and industry as a whole?Jeremy:Dyn is an infrastructure company and that world is changing rapidly.  The cloud paradigm has turned the world-making infrastructure more transient but it’s also the next way to manage how e use computational resources.  Where it goes is a huge unknown and deciding where we focus our time as we grow is where we spend a lot of time.Expect to hear more about DNS and security through attacks and DNSSEC.  We think that there are more systems that work together without human interaction, less web portals and more APIs which will make DNS still a behind the scenes technology that is better known to a bigger audience.