“So I promptly backordered it (DudeRanch.com), opened up a credit line to $100k, and spent several sleepless nights in nervous Christmas-day-like anticipation.”

Peter’s the founder of DudeRanch.com, which he launched in 2010. He’s been in the web startup business since 1999, and included stints at eTour.com, AutoTrader.com & IgnitionOne. Over the years, he’s become a stubbornly addicted domainer, webmaster, and digital marketing disciple.

Regarding the site, DudeRanch.com helps chronicle and list dude ranch vacation destinations throughout the USA and Canada, while also highlighting available jobs and real estate opportunities. As a site, they’re proud associate members of the Dude Ranchers’ Association of America, and well as the Colorado Dude & Guest Ranch Association. 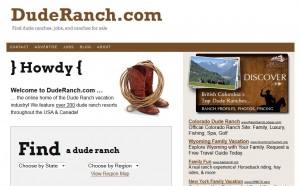 MO: Let’s start with the basics, what is a dude ranch and why would we want to go to one for a vacation?

Peter: Well, to answer that, lemme give a little history first.. Back in the early 20th century, folks on the East coast became enamored with the ‘Old West’ lifestyle, mainly due in part to the proliferation of Radio/TV shows & movies that romanticized the frontier era. These interests lead several enterprising ranch owners out West to offer vacation packages promising an authentic ranching experience within an Old West environment. And it worked – – really well.

Also at that time, the term ‘dude’ loosely meant ‘an individual unfamiliar with life outside of an urban setting’. So ranch visitors slowly became referred as ‘dudes’, and the ranches themselves, ‘dude ranches’.

Today, ranches operate in a similar way, but have also evolved quite a bit. In addition to horseback riding (a staple at all ranches), most offer much more, including hiking trails, mountain biking, fly fishing, and even spa services.

Visiting guests today drop by for several reasons – some to expose themselves to the Old West lifestyle, some to soak in the natural beauty of the surrounding landscape, and others to simply enjoy the exposure to unique ranching activities and family friendly atmosphere.

MO: You used to work in the movie industry at Paramount Pictures in Hollywood and earlier at the New York City Mayor’s Office of Film. How did you make the big leap to the dude ranch industry?

Peter: It was a long odd leap, believe me. And in some ways, the dude ranch industry chose me.

It really started when I began exposing myself to the domain name business, and the aftermarket where names are bought & sold on a regular basis.

My background online began after my stint at Paramount. After jumping into several web startup opportunities, I began digging into the online advertising and lead generation niche. In 2006, after reading a few blog posts from Jim Boykin and Aaron Wall, my perception of domain names shifted, and I began to understand the real value of those assets, and the instant value they created for small (or large) business owners. And once I successfully purchased and paid off a few names myself, my interest grew into a deep-seeded infatuation.

So from there, I continued to buy & sell, as well as buy & monetize domain names. But I was looking for one single name to sink my teeth into – to truly develop into a real worthwhile business and apply what I’d learned from my years online as well as incorporate my interests in traveling and being outdoors. And in late 2009, an opportunity popped up. The domain ‘DudeRanch.com’ was abandoned by its original owner and went up for auction. So I promptly backordered it, opened up a credit line to $100k, and spent several sleepless nights in nervous Christmas-day-like anticipation. On Nov.4, 2009, faux Xmas arrived, and I was able to win the auction, and secured the name for $18k ($17,949 to be exact). Six months later, I launched the site. And now, almost 2 years in, we welcome over 50,000 visits a year and the domain is fully paid off.

MO: Are dude ranch holidays growing in popularity? If so, what do you think is contributing to this growing trend?

Peter: What I’ve learned from the industry is this – that as our world becomes more and more digital, the more important – and more popular – vacation destinations like dude ranches are becoming. Where visitors are strongly encouraged to unplug and soak in the surroundings, the experience, and the environment. And I can attest – being a web guy myself and having visited several ranches, the experience in unparalleled. No beach or theme park can compare. You truly come away with a different frame of mind. And outside of the digital world aspect, the movie industry also helps promote the Old West lifestyle with remakes like ‘True Grit’ and ‘3:10 to Yuma.’

MO: I had a look at the list of dude ranch locations and was surprised to see places like New York and Florida on the list. Do you think that a lot of the general public is unfamiliar with the dude ranch industry and what it has to offer?

Peter: Depends on where you are geographically, really. If you’re out West, dude ranches are well known and established. If you’re an East coaster, most folks have heard of dude ranches, but are a little unfamiliar with what they are and the fact that they’re a vacation destination. That’s one aspect I’ve really enjoyed with the site – exposing this niche to the vacationing public and educating them on the industry as a whole (as I’m an East coaster myself). And mainly, that there are lots of other activities at a dude ranch besides horseback riding.

MO: What’s been the most rewarding aspect of introducing the public to the dude ranch industry?

Peter: Honestly, now that I have a strong understanding of the ranch experience, I simply want to share that with other folks, cause it’s had such a positive experience on me. There’s something special about each and every one of these ranches, and the friendly connection they provide to every visitor. It changes your perspective and you leave a better person.

MO: What’s the biggest lesson you’ve learned about being an entrepreneur so far?

Peter: To be patient and methodically work towards a goal, one baby step at a time. Small steps are still steps, and as they say, if you stumble, you’re still moving forward : )